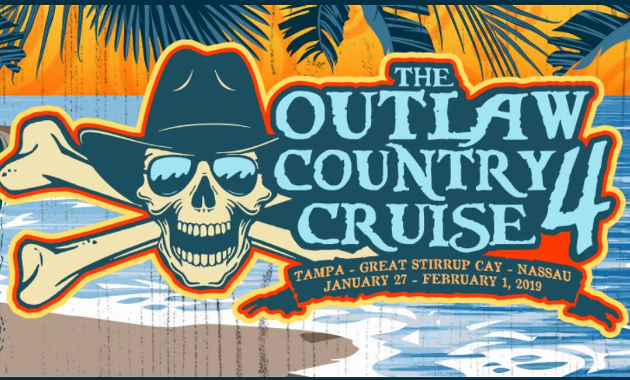 Yarr there matees, it’s time once again to peruse over the lineup for the annual Outlaw Country Cruise, and ponder just exactly how “Outlaw” it is to board a luxury cruise ship bound for an exotic tropical destination, or if seawater will ruin your favorite black leather vest. As juxtaposed as it seems, don’t fool yourself into thinking that if you didn’t have a chance to ship out on this, you wouldn’t bite on it like a barracuda on a wounded minnow.

Operated by the promotional company Sixthman who also puts on the the Americana-themed Cayamo cruise and other music-themed cruises, the Outlaw Country Cruise is now in its 4th year. As you can tell by the lineup, the Outlaw Country Cruise very much identifies itself by SiriusXM’s Outlaw channel, of which Steve Earle, Roger Alan Wade, Shooter Jennings, Elizabeth Cook, and Mojo Nixon are all DJ’s on. Along with multiple performances by each artist, the cruise features artist-hosted activities, live radio broadcasts, collaborative performances, autograph sessions, free meals, theme nights, and other stuff.

The full lineup of the 2018 Outlaw Country Cruise includes:

The Norwegian Pearl will embark for a 5-night cruise between January 27th and February 1st from Tampa, FL en route to Great Stirrup Cay in Nassau, Bahamas. For more information, get your salty ass over to OutlawCruise.com .

Here’s a video to show you how badass it all is: