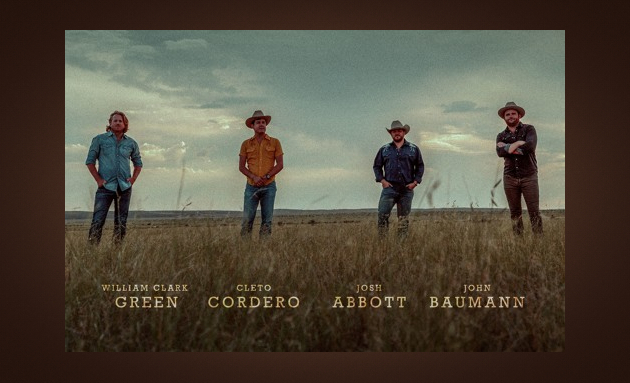 The only thing better than a badass Texas music songwriter from the Panhandle is four of them combining their powers in a country music supergroup. That’s what you have with The Pandlandlers, which sees William Clark Green, Josh Abbott, John Baumann, and Cleto Cordero of Flatland Cavalry coming together to form one of the most buzzed about supergroups since The Flatlanders held forth from Lubbock in the early 70’s.

First hinted at in mid October, we now have all the details of what can be expected from this collaboration, including their first single “No Handle,” which is the first taste of the self-titled album that will be released on March 6th via Bruce Robison’s The Next Waltz project. Robison also produced the effort, which just like all of his Next Waltz projects, is recorded live and to tape in his analog studio outside of Lockhart, TX.

Approached at first as a covers songs project embodying the spirit of the Panhandle region that gave rise to artists like Buddy Holly, Waylon Jennings, Joe Ely, Jimmie Dale Gilmore, Terry Allen, and so many more, it morphed into an original record during a songwriting session the four artists assembled in Marfa, Texas. With songs like “West Texas In My Eye” written by fellow West Texas artist Charlie Stout, “Panhandle Slim,” and “Cactus Flower,” The Panhandlers aren’t presenting their West Texas roots simply in spirit. The landscape and people of this region are what directly inspired the songs of this project.

Plenty of pedal steel, fiddle, banjo, dobro, and guitar are featured on the album, and each song was cut live with all the players in the room. Cleto, William, Josh, and John all take turns singing lead on respective songs, while also taking opportunities to sing harmonies with each other.

The Panhandlers will make their live debut on Wednesday, January 8th at The Music Fest in Steamboat Springs, CO, with future tour dates expected to be announced soon.

The Panhandlers is now available for pre-order.