Panties Or Not, Kacey Musgraves Brings Country to the CMA’s 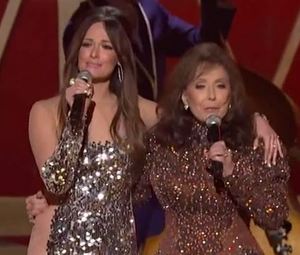 By golly the 2014 CMA Awards actually had some country on them, courtesy of Song of the Year winner Kacey Musgraves, and one big surprise guest.

The looming question heading into Wednesday’s CMA festivities was who would be the “surprise country legend” being touted by producers as the night’s big unannounced performer. “There’s going to be a surprise guest in one of our performances from one of the biggest legends of country music of all time,” said CMA Executive Producer Robert Deaton. “I’ll just leave it at that. It’s going to be a great moment when people are going to want to get out their phones.”

Lo and behold, when it was Kacey Musgraves’ turn to take the stage, the backdrop was in the form of the WSM Grand Ole Opry barn, and she wasn’t signing one of her award-winning singles like “Merry Go ‘Round” or “Follow Your Arrow,” she was singing Loretta Lynn’s “You’re Looking At Country,” with surprise guest Loretta joining her from stage left during the second verse.

But apparently Loretta’s appearance wasn’t the only surprising storyline of the performance. As the bouffant-haired Musgraves revealed afterwards, her panties “fell off” right before she was scheduled to go on stage.

“Right before I sang, my panties totally came off,” Musgraves told reporters during a backstage press conference. “They were the stick-on kind. Look at this dress, there’s not much to work with. So they were stuck on. And then they weren’t stuck on, and the curtain was about to come up, so literally I had to rip them off and throw them to the side. In case you see ‘em, they’re mine.”

But the show must go on, and did to the tune of Musgraves and Loretta receiving a standing ovation from the CMA crowd.

“Do you know what this means for country music?” Kacey Musgraves said while accepting her Song of the Year trophy for “Follow Your Arrow.” It didn’t just mean something because of the progressive slant of Kacey’s “Follow Your Arrow” song with both its accepting nature of gays and marijuana. It meant something because it was also—and maybe ironically—coming from one of the most traditional country artists in mainstream music today. Kacey Musgraves has crafted a way to make traditional country seem cool and hip again, and it’s sticking, even if her adhesive undies aren’t.