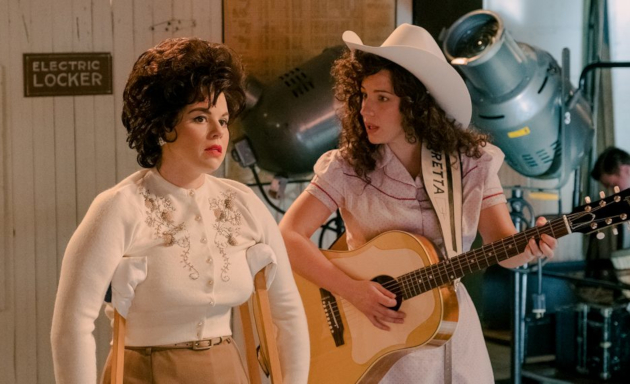 If you didn’t get your fill of country music history from the recent Ken Burns PBS documentary on the subject, the dramatic film Patsy & Loretta will premier on the Lifetime channel at 8:00 p.m., 7:00 p.m. Central on Saturday (10-19). Though other films have touched on the careers of Patsy Cline and Loretta Lynn as they intertwined in the early 60’s—including the critically-acclaimed Loretta Lynn biopic Coal Miner’s Daughter from 1980—the new film focuses on the friendship between the two stars exclusively.

Megan Hilty, who appeared in the music drama series Smash as well as the theater adaptation of 9 to 5, plays Patsy Cline. Jessie Mueller, who won a Tony Award in 2014 for portraying Carol King in a musical, plays Loretta Lynn. Many familiar names worked on the Patsy & Loretta project, including director Callie Khouri who wrote Thelma & Louise and was a major figure behind the recent Nashville television series. The script was written by Angelina Burnett, and the film was shot on location in Nashville in March of 2019.

Though some may be concerned that the film will carry a made-for-TV feel since it’s being shown on Lifetime, a trailer for the film (see below) shows that the subject matter will not be all rosy, and the story will delve deep into the complicated relationships the two women faced both with their men, and the music business. Lifetime is also calling the film the network’s “Movie Event of the Year,” and have put a lot of time and effort into promoting the film.

Patsy Cline’s daughter Julie Fudge and Loretta Lynn’s daughter Patsy Lynn Russell also worked on the film as co-producers, and have endorsed the film. “We were able to help [the filmmakers] maneuver through this story from the family’s point of view, and I feel like they valued that and respected us as a resources,” Julie Fudge tells Billboard.

But the film does take some dramatic license with the story according to the two daughters. For example, the film portrays Patsy Cline as being alone in the car when she has her traumatic accident in 1961, when in truth her brother was in the car with her. Loretta’s husband, Oliver “Doolittle” Lynn, is cast as one of the villains in the film, when this isn’t exactly historically accurate either. “They’ve got my dad looking like a total asshole, and he wasn’t,” says Patsy Lynn Russell. “It’s OK, I always say, ‘It doesn’t matter in any business you’re in someone has to be the asshole,’ and so they picked my dad.”

Patsy Cline was already an established star when Loretta Lynn showed up to Nashville with a $17 guitar. Instead of Patsy seeing Loretta as a potential competitor or replacement, she took Loretta under her wing, and they soon became close friends, touring partners, and confidants, helping each other through the struggles of fame and familial problems.

The friendship of the two country legends came to a tragic end when Patsy Cline died in 1963 at the age of 30 in a plane crash that also took the lives of Hawkshaw Hawkins and Cowboy Copas. Meanwhile Loretta would go on to be known as the First Lady of Country Music, and is still recording and releasing music today at the age of 87.