Pointer and I Visit Downtown Nashville

Trigger Down with Pop Country 29 Comments

Last week as I was traveling through Tennessee, I took some time to visit downtown Nashville, where I hadn’t been in a few years, and I brought along one of my best friends named Pointer. Pointer goes wherever I go. Funny thing is, we don’t always like the same things. For example, when I go somewhere sightseeing, I really have no desire to have my mug in the picture. Pointer is just the opposite, he wants to be in all the pictures. We also have total opposite tastes in country music. I like the cool old stuff and the new independent stuff, while he likes the current pop country radio stars. But we’re both good enough friends that we can respect each other’s interests.

I thought it might be fun and informative to share Pointer and my pictures of our downtown Nashville trip for those who’ve never been there.

We started off the adventure on lower Broadway, the last bastion of what Nashville used to be. You can find cool vintage shops here like the Ernest Tubb Record Shop and Hatch Show Print, legendary venues like Robert’s Western World, where BR549 and Joe Buck got their start, and Layla’s Bluegrass Inn next door, a place Hank3 plays frequently, all overshadowed by the mother church of country music, the majestic Ryman Auditorium just across the alley.

Of course one of the most famous places on lower Broadway is Tootsie’s Orchid Lounge, where Kris Kristofferson, Willie Nelson and others would hang out and write songs all day (Ryman Auditorium in the background). 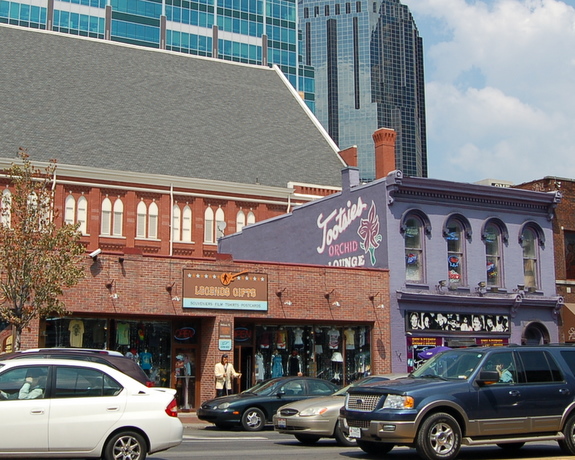 It’s also famous for the famous faces painted on the front of the building. Pointer found one particular famous figure he really wanted his picture taken with. 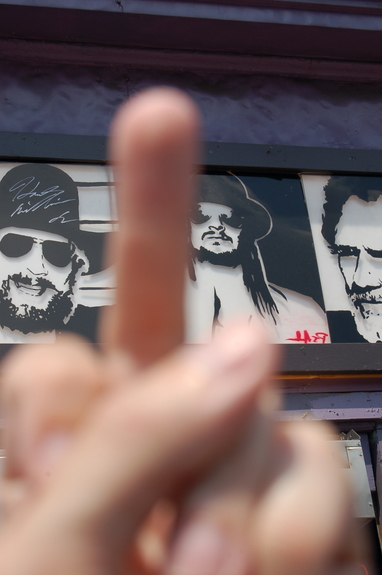 Then we walked around the corner to visit the majestic Country Music Hall of Fame. In front of the Hall we came to a really cool walkway called the “Music City Walk of Fame”, with stars of famous people like Ernest Tubb, Little Jimmy Dickens, and Kris Kristofferson adorning the sidewalk. 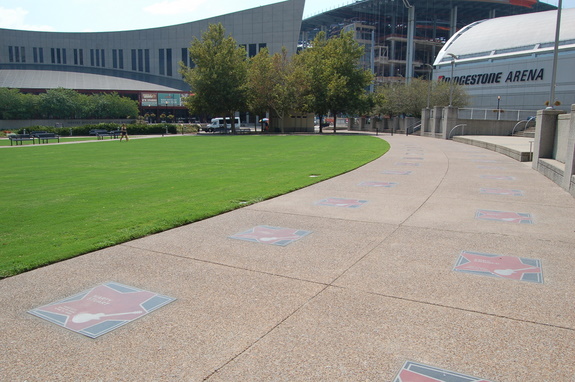 Pointer found numerous stars he wanted to get his picture with: 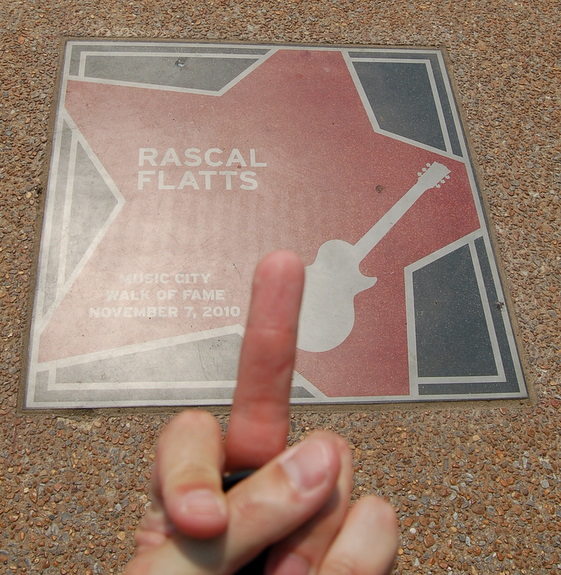 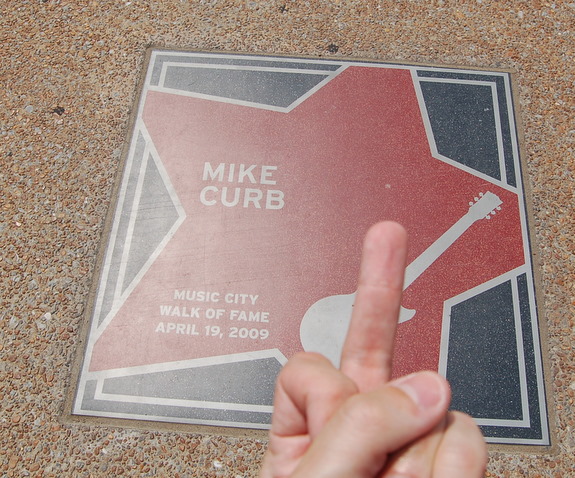 And of course, we already know what a HUGE Kid Rock fan Pointer is! 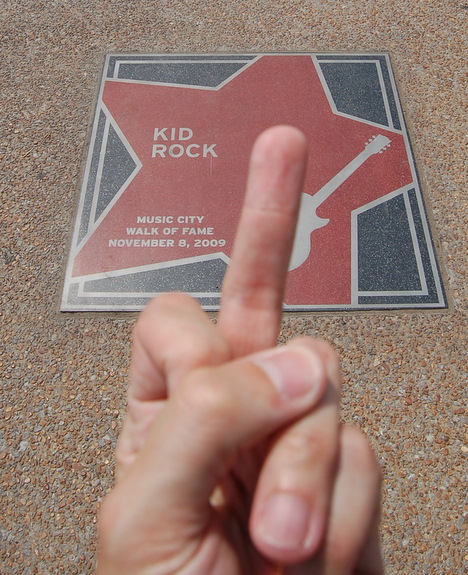 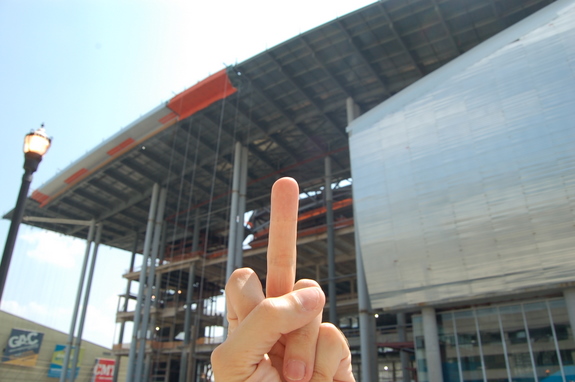 While walking down 3rd and Commerce, we ran into some bona fide Nashville natives: 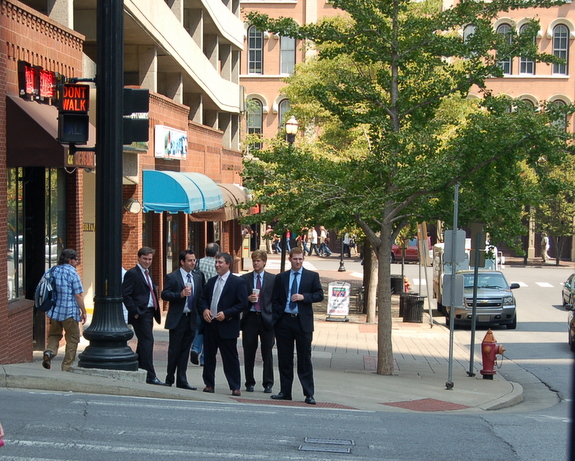 I asked Pointer if he wanted to have his picture taken with them, and he said no, that they looked like assholes. I told Pointer it’s not fair to judge a book by its cover.

Then we hiked a mile or so to the famous Music Row district, where all the big movers and shakers in country music do their business. Apparently we’d just missed by 24 hours a big shindig at the BMI headquarters, canonizing Jason Aldean, Colt Ford, and Brantley Gilbert on the success of the #1 song “Dirt Road Anthem”. From CMT’s account, it sounded like quite the affair:

Large, gold-painted stones anchored the burlap table cloths that flapped and curled in the late afternoon breeze as uniformed servers circulated through the crowd, proffering trays of miniature cheeseburgers and bite-size servings of barbecue.

Now if that ain’t country, I’ll kiss your ass.

Pointer, being a huge fan of Leanne Rimes and Tim McGraw, wanted to get his picture in front of the home office of his favorite record label on Music Row: 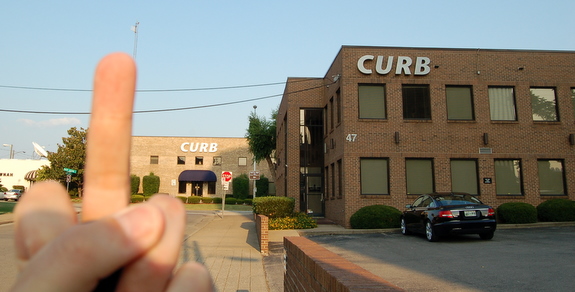 After this picture, Pointer leaned over to me and said, “This Curb character sure does have his name splattered on just about everything down here, doesn’t he?”