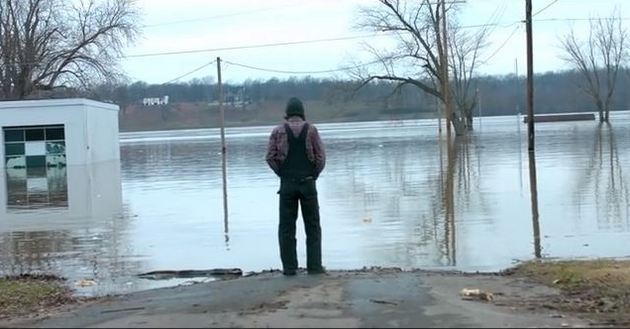 As the rest of America was focused on the celebrity indictment of Bill Cosby and New Years festivities, the American Heartland was suffering some of the worst flooding some areas have ever seen. The Mississippi, Meramac and Missouri rivers, along with many other tributaries and creeks, have inundated areas of Illinois and Missouri, and the flooding has been linked to at least 24 deaths. Major Interstates were closed to due to water over the roadway, and now folks in the South are bracing for the worst as the water makes its way downstream.

Meanwhile a country band by the name of Evan Webb and the Rural Route Ramblers has released a song and video that delicately, yet accurately portrays the devastation river communities face in times like these, and how even when the flood waters subside, things are never the same. From the small community of McClure, Illinois, right on the banks of the Mississippi, Even Webb looked to capture the despondency of living in a dying town in the song “Dry Up or Drown.” When the Mississippi overran its banks once again, life imitated art.

The images are powerful enough. Shot by Reginald, it shows the true life destruction floods can cause, with homes surrounded by water, and the double yellow lines of roads descending into swamped out landscapes where little hope seems to remain. Yet it’s the true life lines of the song like “Hope left here on a prison bus. Guess this town ain’t good enough for the worst of us” about the recent closing of the nearby Tamms Correctional Facility, that really set the loss of community the song and video look to portray into stark perspective.

As soon as the video was posted on January 1st, folks in the communities affected by the flooding began to share it. But Evan Webb and the Rural Route Ramblers weren’t celebrating, they were out sandbagging to help save what’s left of their community.

It appears 2016 already has a leader in the clubhouse for Song and Video of the Year.

Dry Up or Drown, Evan Webb, Evan Webb and the Rural Ramblers