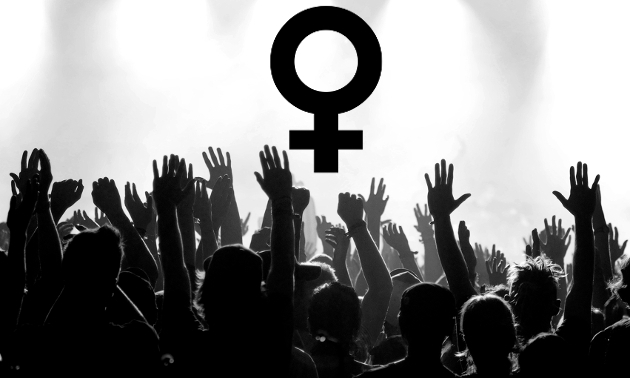 There has been a strong movement over the last few years to rehabilitate the way women are addressed and portrayed in music, and in many respects it is a worthy one. For example, why do we refer to women who happen to be songwriters as “women songwriters” when their male counterparts are just considered “songwriters”? Are women any less songwriters than men? Is there some benefit to prefacing a songwriter by their gender? Or is it systemically downgrading to be referred to as a “female songwriter” or “songstress”?  To some artists and their fans, it is. To others, the difference may seem innocuous, or silly. But if some artist and their fans are offended, and prefacing a songwriter by their gender is superfluous in the first place (which it is), then why not consider changing the practice?

There are other similar examples where agreeable changes can be made in the way we approach talking and writing about music that may help even the playing field for women in music in a fair, and fairly non-controversial way to make sure they are given the same consideration right beside their male counterparts.

However there is a segment of this movement that doesn’t want to stop there. Referring to women by their gender at all, referring to them as wives, mothers, or daughters, making reference to their children or home life, or talking about their increased struggles balancing a music career and personal life compared to men should be completely off limits. Furthermore, if these more rigid guidelines are not followed, some believe the offending party can or should be hounded down as sexist, or misogynistic for insinuating that a women’s experience in music is anything different than that of a man.

A well-circulated study from Oxford called Gender Bias and Sexism in Language is a good starting point for understanding what is behind the concern for how we approach the subject of women in language.

“Language is one of the most powerful means through which sexism and gender discrimination are perpetrated and reproduced,” the study says. “The content of gender stereotypes … is reflected in the lexical choices of everyday communication. As a consequence, language subtly reproduces the societal asymmetries of status and power in favor of men, which are attached to the corresponding social roles … In order to reduce gender bias, it is necessary to change people’s linguistic habits by making them aware of the beneficial effects of gender-fair expressions.”

A good example, and one cited in the study of how women can be systemically downgraded via language is how a mother who works in a given profession is often referred to as a “working mom.” This implies that the woman may either not be able to do as good of a job as a male counterpart, or perhaps won’t be as dedicated to her occupation, since it insinuates that motherhood is probably her first priority. Again, this is an example of where a simple, non-controversial tweak in language can help erode systemic biases against women in the workplace. A woman, just like a man, should be judged by her work, not what home life she happens to live. Men are never referred to as “working dads.”

This underlying philosophy of how language should be approached is commonly taught in schools and universities, especially in gender and women’s studies courses, and has become a favorite charge of many journalists and activists in the online world. Sometimes this manifests in fair corrections and suggestions to colleagues to make sure clear uses of gender bias in language are broken down. More severe interpretations of the gender bias concern often assert the idea that there is no difference between men and women at all, either biologically or socially, and that referring to gender whatsoever is sexist or misogynistic at its root.

Under this more stringent philosophy, music journalism has been integrated by acolytes of the gender bias in language school who believe music should be dealt with using the same set of guidelines as the business professional world—meaning gender, or things like motherhood or who someone is married to should not be broached when talking about music at all, especially in ways where it may come across as systemically downgrading to the artist.

But there are multiple dilemmas this creates in the world of creative expression that is fundamentally different from the professional world. Often songwriters and performers who happen to be women write and sing about their very specific experiences and struggles as mothers and wives or women in general. In country music for example, this is especially relevant. Country music is full of examples of women singing about womanhood in one capacity or another since so much of the music is based on personal narratives.

In music, especially in independent music—which is more album-based as opposed to singles-based—the element of “narrative” is a very critical one. Narrative is what ultimately binds fans and listeners to artists beyond the music itself. It is a way for the audience to emotionally connect with an artist on a deeper level, building a loyalty into their patronage, and a more fundamental connection to the music beyond the words and sounds.

For many listeners, they may not recognize the role narrative plays in their fandom, they just know that they emotionally connect with an artist and their music better than with other artists. Often this is due to shared experiences the audience member has with the artist. This doesn’t always manifest itself along gender lines. A man can emotionally connect with the story of a mother by recalling memories of his own mother, or watching his wife or other loved one struggle and persevere in life, or seeing the similarities between the problems men and women face.

Music is very much dependent on our life experiences—the exact opposite of the business or professional world where broaching subjects of family life and personal behavior are often seen as inappropriate, or a distraction. A business professional who shows up to work telling their co-workers how their spouse just left them and so they’ve fallen down a pit of despair, and have been trying to drown their sorrows in whiskey is probably not long for a professional career.

Yet for a music artist, bearing the details of their personal lives in often revealing and vulnerable ways is essential. Women singing about their experiences as wives and mothers is a regular occurrence, and music journalists charged with describing or reviewing the music must broach these subjects in a direct manner to tell the full story. When severe limitations on how we speak about women performers are implemented, it erodes the opportunity for the audience to find an emotional connection with the artist. In other words, the effort to implement narrow guidelines on how women in music can be addressed risks doing more harm than running the risk of stereotyping by gender by referring to women as wives or daughters, or other feminine markers.

Further confounding the issue for music journalists is that often the artists themselves—as well as their management, publicists, and labels—encourage the use of narrative, want women to talk about their experiences as wives, mothers, and daughters to emotionally connect with an audience, knowing the important role it plays in delivering compelling music.

Making matters even worse, the emerging practice of Twitter trolling has made covering women in music a mine field of ever-evolving and severe rules, discouraging some from covering women at all, afraid they will be chastised and hounded down as sexist or misogynist simply due to a misunderstanding or disagreement in syntax. Better to not cover a certain artist, piece of music, or a subject involving women at all if it might result in negative blowback for a particular media brand, especially for perceived slights that seem to become more slanted and severe by the week. In fact some Twitter trolls have hounded down certain journalists and told them not to cover certain subjects involving women at all.

So yes, systemically downgrading language like “female songwriter” should be considered and stricken from the lexicon of music coverage. But the severe restrictions on what can and can’t be broached in music coverage often does more harm than good, especially for independent performers who rely on narrative to make that deep emotional connection with the audience, and find support among the listening population for their craft.