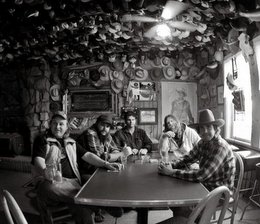 It speaks to the glutted nature of today’s music world that I’m only now sitting down to write a review for what I’ve discovered to be one of the best albums to be released in all of 2012 here some 20 days after the end 2012. It also speaks to how hard it is to attain a copy of Old Excuses. No, it’s not available on Amazon, iTunes, CD Baby, or Bandcamp. No updates to the band’s ReverbNation or MySpace pages shed any light on where it can be found. And don’t even think about Wal-Mart or Best Buy. You sort of have to be in the know already about the Good Luck Thrift Store Outfit to partake in its bounty.

But isn’t that the way it is with all the music worth listening to these days? The artists worth your time are so often aloof when it comes to self-promotion, so the music will never just fall into your lap. You have to work for it. You have to seek it out, or it must seek you out, and in many respects this imparts an even greater value to it than the already elevated value of the music itself compared to the music you encounter inadvertently through most popular media. The “thrift store” analogy is a good one for the Thrift Store’s music because the intrinsic value it has to you personally is so much more then it would have as an everyday item, just like that cool trinket or article of clothing that awakens memory or nostalgia in a way something new and shiny never would.

The Good Luck Thrift Store Outfit features a tag-team of two of the best songwriters you will find out there in music right now. And yes, I understand how powerful and presumptuous that last statement was, but I stand behind it 100%, and you will too if you procure yourself a copy of Old Excuses.

Let me put it like this: You could take one of Willy “Tea” Taylor’s songs, just one of them, and it would lay to waste entire discographies from many other artists. Entire label rosters from some of Nashville’s largest imprints become laughable to the power of a single Willy Tea composition. The man is a songwriting virtuoso at the very apex of the discipline. His ability to put words and music to the task of describing life’s most precious moments is unparalleled, and is only rivaled in its touching nature by those precious moments themselves. 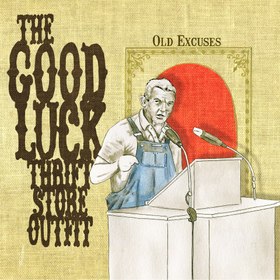 Chris Doud’s songwriting gives nothing up to Willy Tea, though his method is more allegorical. Doud is also the one that brings the meat and potatoes to the Thrift Store’s sound. Songs like “The Wolfman” and “Chuck” are studies in how to convey wisdom through music, while “Little Bit O’ Livin'” and “Highway Religion” are just plum fun to listen to. Together, Willy Tea and Chris Doud touch on all of the colors of the songwriting spectrum, and compile a list of songs on Old Excuses that sends you reeling through the wild range of human emotions.

Though Good Luck Thrift Store may start as a songwriting collective, Old Excuses is a fully fleshed out, expansive and exhaustive musical endeavor with a total of 14 players contributing to the project. I’m talking horn sections and piano, pedal and lap steel, banjo, dobro, fiddle, whatever. Whatever a song calls for is found and fitted to the recording. Furthermore the instrumentation and arrangements are tasteful and honorary to the songs they clothe, from Willy Tea’s finger picking, to the blazing, in-your-face guitar solo on “Highway Religion,” to the settled-back, big-eared drum work of Aaron Burtch, there’s little on Old Excuses to second guess.

Many of Willy Tea’s songs on this album sound similar to those now legendary recordings of Paul Simon in his post-Garfunkel days, where the songwriting is superb, and the style is really laid back and smooth. It’s very rhythmic, but with lots of adeptness and technique being showcased in the background. Then Willy pulls out this magical falsetto, like on one of Old Excuses‘ standout’s, “One Yard.”

“The Wolfman” is the album’s most epic track, showcasing a brass section and settling in near 8 minutes. Though I wondered initially if the song would’ve made a better last track than a first one because it may leave you a little leery for what you’re in for, the last track was definitely more fit for Willy Tea’s masterpiece “Everywhere Now.” These two songs are the perfect way to bookend Ole Excuses. And in between, from boot kickers to heartfelt ballads, the Thrift Store runs the gamut of musical textures and interprets them all better than most.

Old Excuses is worth your time, worth the wait, worth the hassle to get, and worth way more than any monetary value you can name from the enrichment it will bestow to your musical life.