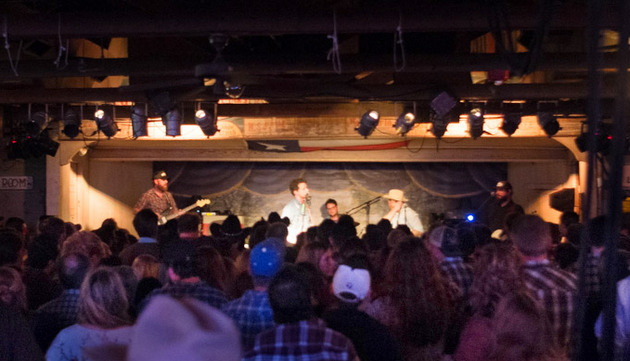 Time was when the Turnpike Troubadours were just hoping to garner enough of a following so they could play historic venues like Cain’s Ballroom in Tulsa, or Gruene Hall in New Braunfels, TX. Now they’re facing the reality that they may just be too big to play these historic spaces anymore except as a nostalgic anomaly. Sometimes Gruene Hall will carve out a couple of consecutive nights to feature an artist or band if their following is too big for only one. But for the Turnpike Troubadours, they required a three-night residency at the “Oldest Dance Hall in Texas” to accommodate all the comers, and crowds sold out all three nights in relatively short order for the November 20th thru 22nd stint.

For a chance to see the Turnpike Troubadours and Gruene, some passed up opportunities to see them closer to home, while others bought tickets for all three nights and decided to make a weekend of it. After the energetic Mike and the Moonpies warmed up the stage on Thursday night the 20th, the Turnpike Troubadours came out and captured the crowd in the crook of their hands by playing arguably all their biggest songs right off the bat and in consecutive order—“Every Girl,” “7&7,” “Gin, Smoke, Lies,” and then launching into a strong set of their originals, all led by frontman and songwriter Evan Felker.

Like many of the biggest country bands in the Texas music scene, the Troubadours put on a country show with a rock and roll attitude. It was up tempo, energetic, and loud, but all Turnpike Troubadour material builds from the words out, and when Felker sang, “I had no clue I’d be the boy who your momma warned you about,” or “Good Lord Lorrie I love you could it go more wrong,” the crowd was in full throat singing along, stomping their boots on the old wood floor and filling the ancient rafters with a youthful country energy.

Midway through the show guitarist Ryan Engleman stepped behind the steel guitar and they slowed the songs down to allow folks to really listen. Another highlight was when Evan Felkerman announced a new song co-written by fellow Oklahoman and former Turnpike Troubadour turned decorated songwriter John Fullbright. “A new album is on the way, as soon as we get all the songs written and in the studio,” Felker said.

Questions of when new music will be on the way are common for the Tahlequah-based group. They’re known for taking their sweet time between releases, and that patience has resulted in some of the best country music you can find from the region. The Turnpike Troubadours remain the ideal bridge if you’re looking to convert your mainstream country-listening friends over to the independent side of the world. But with growing crowds and interest in the band, it makes one wonder how long they can hold out doing it mostly DIY. Their next album promises to be a monster if it simply holds par with their previous releases, and could be one to solidify their place in the national country music consciousness.

For the encore, Evan Felker came out and sang a few just with his acoustic guitar, and bass player RC Edwards even took a turn on the mic. The band said since they were playing three shows in a row, each one would have something different, and something special for the folks who booked all three nights. And after three nights of testing the capacity of both the walls and floors of the historic dance hall, the Turnpike Troubadours brought the run to a close with a seven-minute version of “Long Hot Summer Day” (see video below)—a song that once made it all the way to the World Series. Led by fiddler Kyle Nix, Gruene Hall erupted, stomping out the beat as the entire crowd sang along.

It’s easy to get despondent about the direction of country music when listening to the radio or paying attention to the mainstream of country music day in and day out. But while watching the Turnpike Troubadours at Gruene Hall, it’s easy to forget all of that when you see the younger faces and feel the freshness of the music while still be surrounded by such history.

The Turnpike Troubadours play Cain’s Ballroom for a two night stay December 26th and 27th, and then Billy Bob’s in Ft. Worth on New Years Eve.