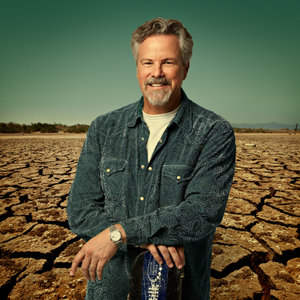 Robert Earl Keen may be best known for his storytelling songs and laid back Texas country style, but for Keen’s next project his grass is going blue. The Houston, TX native has been working on a bluegrass album over the last couple of years, and Happy Prisoner: The Bluegrass Sessions is scheduled to come out in February 2015 through Dualtone Records.

“I didn’t write any of the songs, and we put it together with my band,” Robert Earl Keen tells The Nashville Scene. “Lyle [Lovett] sang on a song, and Peter Rowan sang on a song, and Natalie Maines sang ‘The Wayfaring Stranger’ with me. Kym Warner played the mandolin, and Sara Watkins played fiddle. Danny Barnes played the banjo. So it’s all over the map it’s Flatt and Scruggs, some ‘traditional, arranged-by,’ you know, that kind of thing. The Stanley Brothers, [John] Hartford a life-long love of bluegrass. I thought, you know, if I don’t do this now, I’m never gonna do it.”

Keen told the Austin Chronicle in 2013 that the inspiration for the album came out of getting a little bored with the status quo. He tracked out over 26 songs for the album (and counting), and purposely didn’t write a lick of music for the project.

“I could sit down and make up some fake bluegrass songs, but I just thought it would sound really contrived … There’s some arranging and editing going on, but I wanted to make the songs sound like how bluegrass songs sound to me … I write all the time. I’m just trying to do something different. Maybe I’m a little bored with some of it. I do feel with as many records as I’ve put out and as long as I’ve been in this business, I do feel a little bit at a loss for what to do that’s really interesting. How many zillions of songs are out there? It’s like a movie. It starts off following a camel, then you widen the scene and there’s some palm trees and some sand. Then it becomes a country, then it becomes the world, then it becomes the universe. It’s like, ‘Jesus, can we stop with the songwriting for just a second?'”

What songs can we expect from the new bluegrass album? Keen continues to Nashville Scene,

“We did ‘Hot Corn, Cold Corn,’ a Flatt and Scruggs song … It’s pretty foot-stompin’ and hollerin’ kind of stuff. We did ‘Poor Ellen Smith’ and we made it extremely soulful … There was some movement around, you know, sometimes. Like The Stanley Brothers’ ‘The White Dove,’ we did that just solid straight. I’m not out to re-invent the format. I love to do that, but at the same time, the risk is you just don’t do the song justice. I think in terms of what works for the song, just like I do with my own songs: ‘Hey, this is really good, and this would be nice and sparse. And we’re gonna have this one really in your face.’ It’s a great record it sounds great.”

Keen has of course dabbled in bluegrass throughout his career. His song “The Bluegrass Widow” from Keen’s 1998 The Live Album lists off traditional bluegrass tunes as it tells its story.