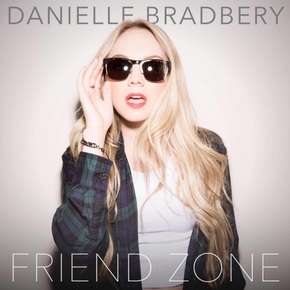 Not that an artist like Danielle Bradbery had too far to fall. A product of the final round of the fourth season of The Voice, taken under the wing of coach Blake Shelton, signed to Big Machine Records shortly thereafter, she joins the growing gaggle of 2nd and 3rd tier country stars burrowing holes like busy little hedgehogs, trying to discover new career lows for themselves and country music by releasing brash and ill-advised singles that lead country music down the wrong path and won’t stir the attention of the greater population anyway.

Forget those moments on The Voice when Danielle made her way to 1st Place by singing songs by Pam Tillis, Patty Loveless, and Rodney Crowell. There’s bills to pay, and a career to get unstuck from second gear. I’m sure Danielle is a super sweet girl and that her hair smells ravishing, but her latest single “Friend Zone” is a techno-loaded disaster that takes the worst attributes from Iggy Azalea’s id and shoehorns them into a meager, non-country composition, stinging the ear drums like flying battery acid.

The premise here is that boys need to stop being so shy and step up to the plate, tell the girls their feelings, make a move, and call them back the next day. And to some extent, there’s nothing particularly bad about that message, and both guys and girls could get something from it. Some wonder why the douchebags are the ones that end up with all the girls, and the reason is they have the self-confidence (and lack of self-awareness) to actually put the effort out to approach women instead of waiting for the woman to make the first move, which women are physiologically opposed to generally.

All that’s peachy, but when this message is run through the new pop techno EDM rap rock filter of nouveau “country” music, clogged with the financially-minded and egotistical priorities of the lame industry, and stinking like your garbage disposal when a quarter of a chicken carcass and asparagus mush is stuck in the bottom, it sullies any and all positive takeaways one could salvage from this parted and pieced together musical machination.

First, some disambiguation is needed between the two sports of football and baseball in Bradbery’s analogies. Sometimes she’s talking about end zones and sidelines, and other times about three strikes and stepping up to the plate. I guess the idea is the girl in the song is using language boys can understand, but the result is a kung fu mess of colloquialisms that would fry the circuits of most bros looking to score with a dish like Bradbery. And if she’s trying to slide sexual connotations into her references to “bats” and “end zones,” this makes the whole exercise that much more awkward and awful.

But the writing isn’t the worst of it, it’s these Iggy Azalea-inspired interludes all slathered with attitude that send this song careening into the country music ditch. There’s nothing wrong with rap as an art form in itself when you consider the possibilities of fitting rhyme into pentameter. The problem with a lot of rap is the attitude. This whole “three snaps in a ‘Z’ formation” tone Bradbery uses is total garbage and completely ruins the song as country fare or otherwise. And the dobro and banjo shoved into the mix only shows that they know this crap isn’t country and tried the hide the ruse by overdubbing some country instrumentation.

But don’t worry about this song. This is a last ditch effort—or to use the “Friend Zone” terminology, a Hail Mary by Danielle Bradbery and Big Machine Records to salvage the marginal interest in a reality TV star turned mainstream also-ran before it slides away completely.

Daniel Bradbery has a voice, and talent. You don’t win The Voice without them. But “Friend Zone” is a waste of them.