Song Review – Frankie Ballard’s “It All Started With A Beer” 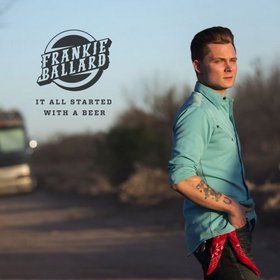 There’s something about Frankie Ballard that even makes the jaded and distrusting country music fan want to like him. He’s got a swagger and style that’s not like the rest of those mainstream pretty boys and false characters. There’s a little Chris Isaak to him, or maybe even some Marty Stuart or Dwight Yoakam early in their careers. He’s more t-shirts and denim jackets than designer jeans. He can sport a Nudie and not look stupid. Frankie’s got a 50’s soul, and is a good guitar player who holds himself more like a musician than an entertainer on stage. And he’s been around for little bit and is slightly older at 33 years, making the idea that he might be someone whose music you could get into a little more realistic.

But even though Frankie may be a little bit cooler, and tad more authentic, all you’ve got to do is delve a bit deeper into his music career to realize he’s still very much a product of the mainstream, opening for Kenny Cheseny, Lady Antebellum, and Florida Georgia Line on tour, and releasing pretty mediocre singles, a few more deeper album cuts aside.

As a mainstream male country star in the major label world, you can have three #1 songs on radio and still be considered a 3rd tier star like Frankie. All it takes is the right push by your label, and most any young male can go #1 on airplay charts. It’s pretty much expected of you. And there’s no reason to doubt Frankie’s new single “It All Started With A Beer” won’t benefit from the same fate.

Just like Frankie, it’s a bit more authentic than what you’re used to hearing on mainstream radio. But ultimately “It All Started With A Beer” is just another beer song, and not a particularly good one. It starts talking about Corona and Bud Light, and very soon the story gets drenched in suds and you feel more thirsty than entertained or enlightened. Just like Luke Bryan’s “Drink A Beer,” it tries to say something deeper, and use the beer references as the glue to the story. But that glue is alcohol soluble, and falls apart pretty quickly.

We used to complain that most all country songs these days were about beer and trucks. The point was to hopefully expand mainstream country’s thematic subjects. Bo in concession they cut most of the references to trucks out, leaving only one piece of subject matter on the table. There’s only one little Indian left, and it’s amber and comes in a bottle or can.

Is “It All Started With A Beer” a bit better than what we’re used to listening to on the radio? Sure it is. It’s an organic recording, and there is an element of story to it. And in some respects it’s a shame that you can’t get past the title and first line without rolling your eyes and not giving it much more of a chance. Beer has been a common subject matter in country songs for generations. But it’s no fun when it’s the only subject.