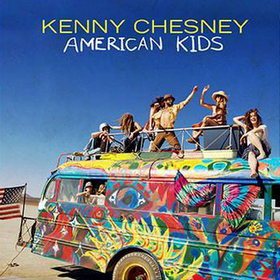 In this whole muddled, unsettled moment we find ourselves amongst in country music, where so called “bro-country” purely dominates, and and older artists are so quickly being left behind, Kenny Chesney inhabits a very interesting space. Chesney won the coveted CMA Entertainer of the Year prize in four of the five years between between 2004 and 2008, deposing a two year run by Alan Jackson with his first one, and eventually being replaced by Taylor Swift after his last, highlighting just how much Chesney is a bridge between the old and the new. So where does Chesney fit in the current scheme? He can still sell out arenas and stadiums, but is he apt to try and run with the young guns of bro-country, does he simply try to hold ground, does he do battle with the current trends, or does he cash in his chips at the end of one hell of a run?

That’s why his new single—the first one in over a year—is filled with such intrigue. Chesney just took a year or so off to retool and reflect before releasing new music, and now he’s back with a song called “American Kids” written partly by hot commodities Luke Laird and Shane McAnally, mostly known in recent memory for helping Kacey Musgraves with much of her award winning album Same Trailer, Different Park (Incidentally, Musgraves was on tour with Chesney for a while last year).

Prefacing “American Kids”, Kenny Chesney says all of the right things. “There is so much more to being alive than partying, tailgates and bonfires,” Chesney tells CountryMusicRocks. “It’s every single detail of being young, growing up, remembering when, laughing about how, but especially knowing you can still do all those things! American kids are so much more complicated, more fun, more real …. Just because it makes you smile, that doesn’t mean a song can’t say something! To me, it’s the songs that feel so good that really bring home a message.”

Okay, that all sounds good …. And then here comes the song.

Like other mainstream artists that try to work “progressive” but don’t want to go all in on releasing a rap or EDM tune, Chesney puts out a song that despite his denouncement of “partying, tailgates and bonfires,” still relies heavily on the listing off of artifactual staples daisy chained by buzzwords, while favoring a rhythmic delivery instead of a melodic one. This is one of the reasons the term “bro-country” is so ineffectual, because it fails to convey the underlying problem with the trend: the replacement of lists for stories, and rhythm for melody.

Doublewide, Quick-Stop, Midnight, T-Top, Jack in a Cherry Coke Town.
Mama and Daddy put there roots right here, ’cause this is where the car broke down.
Yellow dog, school bus, kicking up red dust, picking a song by a barbed wire fence.
MTV on the RCA, no AC in the vents.

How is this fundamentally different than “partying, tailgates and bonfires”?

Like any song that has a chance on radio today, “American Kids” starts off with a heavily-electronicized beat meant to get passive listeners bobbing their heads. The rhythm is just ambiguous enough that maybe it came from a cajÃ³n or some other instrument, hoping to shirk some criticism about its origins, and reminds one of the rounded, boppy beats of Surgarland’s 2010 single “Stuck Like Glue”.  The “hey!”‘s and hand claps are about 24 months too late to be Lumineers relevant, and comes across as straining. But isn’t that the way of Music Row?

Are the words to “American Kids” a little more weighty than what Florida Georgia Line might throw down? Perhaps, but they also miss the opportunity to delve into the underlying theme that made songs like Mellencamp’s “Little Pink Houses” or Bob Seger’s “Night Moves” or even Simon & Garfunkel’s “America” standards of the Heartland. They all delved into the dicotomy of American youth: the elated sense of freedom, discovery, and hope, but tinged with loneliness, fear, and indecision about what the future holds. Instead of really spelling out this essential part of this eternal theme, Chesney and the songwriting team seem to rely on minor chords in the structure of the song to strike at those dark moods. Maybe it’s not fair to compare any modern song to a standard from a by-gone era, but even in Taylor Swift’s “22” she at least touches lyrically on the youth ying yang. “We’re happy, free , confused, and lonely at the same time. It’s miserable and magical.”

I’m not really able to even label “American Kids” a mixed bag. It’s definitely different, and sonically it may be a little more complex. But that doesn’t necessarily make something good. Change the window dressing all you want, it’s still a laundry list rhythm-based waste. But as we’ve found out too frequently, that doesn’t mean radio won’t play it.