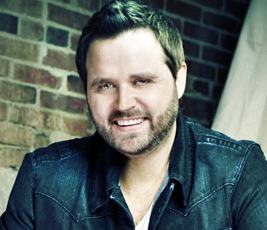 I’ve got an idea: While we’re in the business of thawing out Schwarzenegger to star in summer blockbusters about coming back from the future to save the world, how ’bout we cast him in a movie where the future sends him back to the “Honky Tonk Badonkadonk” writing session as Jamey Johnson, and instead finishing the song, Jamey convinces his co-writers Dallas Davidson and Randy Houser there’s no future in country music and they should open a Shoney’s franchise in Murfreesboro instead, saving country music from certain annihilation due to Houser and Davidson’s future output? Anyone?

Some bad songs make you angry that such a monstrosity would ever be released under the country banner. Some make you sad for what country music has become. This one? Randy Houser’s entry into this new R&B sexy time Bee Gees-inspired country music disco craze? This thing had me laughing out loud so hard from being so embarrassing and absurd, I had milk shooting out of my nose. And I wasn’t even drinking milk at the time.

To hear the festively plump, bordering on 40-something Randy Houser pseudo-rapping about running from the cops through cornfields with his hot lover had me in stitches to say the least. If you need any more validation that modern country music is nothing more than escapism of the mind for bored suburbanites with shallow understandings of rural life, look no further than Houser’s new single “We Went.” Randy Houser could never put enough hair gel and highlights in his 40-year-old’s faux hawk to make this thing seem either respectable or relevant. This songs’s got more pander in it than the Beijing zoo.

“We Went” reads like a rejected Penthouse Forum submission. So let me get this straight Randy, you’re so awesome that you’re running from the cops, at night, racing through corn fields, “tearing up” fences, and “jumping” ditches? Do you know what happens when you get barbed wire wrapped up on the back tires of a Pontiac? Your night ends right there. Do you know what happens when you try to “jump” a ditch like the Duke Boys without a ramp or other way to get any upward velocity in a Pontiac? You eat it nose first right into the ditch.

This song isn’t just stupid, it’s completely implausible. Apparently the songwriters Justin Wilson, Matt Rodgers and John King (why is it always three, ALWAYS?!?) took out the verse about the protagonist breaking his erection off and giving his girly girl blunt force head trauma as her noggin’ bounced off the dash board before they had to call AAA to tow their ass out … and got arrested by the cops they were running from anyway.

Oh, but they had plenty of time to shoehorn in the nonsensical line, “I need a little somethin’ with some get up and go and nobody knows how to get me goin’ quite like you do when you’re doin’ the things that you do.”

Look, there is something patent and poetic to the American experience that involves young men in cars trying to find a little private spot to take their sweet young fraülein for a little bit of heavy petting (or if you’re lucky, deflowering). Yet right as you’ve got your nervous, sweaty hand twisted up in some elastic band or bra hook situation, here come cherries flashing in the rear view mirror of your hand-me-down bald-tired shitbox. Not that it was any songwriting feat in itself, but that was what was embodied in the Keith Urban single “Cop Car” (Yes, written by Sam Hunt, I know) and many other song.

But this? This is a song set to the music of a Cinemax softcore soundtrack with completely nonsensical lyrics. I’m telling you, there’s nothing worse than watching the dads of country music trying to rap and play the role of sexpots.

You’re old Randy Houser, and that’s okay. But good gosh man, meet your declining career head on with dignity, not slumming down in the sewers looking to pander to the least common denominator.