Stars of The Dukes of Hazzard Remember James Best 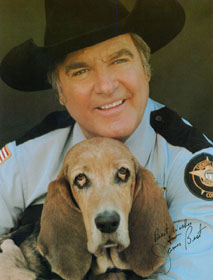 Hazzard county’s sheriff and the haphazard foil for the Duke boys in the legendary television show The Dukes of Hazzard, has passed away. James Best, best known for his role as Roscoe P. Coltrane on the CBS television show from 1979 to 1985, but a lifelong actor and creative personality, died in Hickory, North Carolina at the age of 88 on Monday night (4-6) due to complications from pneumonia.

James Best appeared in 83 movies and over 600 television episodes over his extended career, including the classic movies The Caine Mutiny and Shenandoah, and television series Alfred Hitchcock Presents and The Andy Griffith Show before becoming everyone’s favorite sheriff perpetually in hot pursuit of the Duke boys with his dog Flash. Along with many other roles on the small and big screen, Best was an acting teacher for 25 years, and worked with understudies that included Clint Eastwood, Burt Reynolds, and Quentin Tarantino. Best was also a advocate for stray animals, and adopted Flash from a local shelter and convinced producers to let the Basset Hound be a part of the show.

The youngest of eight siblings, Best was born Jewel Franklin Guy in Powderly, KY in 1926—not a dissimilar setting to the fictional Hazzard County. He was orphaned at age three when his mother died, and was later raised by a Essa and Armen Best in Corydon, Indiana. He served in World War II where he experienced his first acting role in Germany as part of a stage presentation.

Upon the news of James Best’s passing, many of his Dukes of Hazzard co-stars posted remembrances.

“Jimmy Best was the most constantly creative person I have ever known. Every minute of his long life was spent acting, writing, producing, painting, teaching, fishing, or involved in another of his life’s many passions. As an actor, he could play it tough or gentle or hilariously and outrageously funny. He wrote plays and screenplays and poems. His oils and watercolors were wistful and they perfectly captured the rural life in which he had grown up and which he loved. As a teacher, he influenced a generation of actors. He was a world-class fisherman, an extraordinary raconteur, and a devoted friend, husband, and father. That creative energy and zest for life was there until the end. He will be greatly missed, but his work will last for generations to come. He was one of a kind, and it was one of the blessings of my life to have worked with him for all these years. Alma and I are thinking of Dorothy and the family right now. Rest in peace, old friend.”

“James Best was a fine actor, director, and mentor, and an even better friend. Few realize the broad range of the career that existed before he started chasing the General Lee. His escapades with Sonny Shroyer and Sorrell Booke contributed to the iconic status of the show as much as the car chases. We were blessed with a very close group in that cast, and Jimmy will be sorely missed. – Tom”

“I laughed and learned more from Jimmie in one hour, than from anyone else in a whole year. Give Uncle Jesse my love when you see him dear friend.” —- John Schneider

“Darling Jimmy,
Thank you for all the laughs, support and love. I will miss you like crazy honey. RIP.”