Unless you’ve been living on Mars, you probably know all about the often polarizing political opinions of alt-country legend Steve Earle. One of the most outspoken and politically-charged performers of our time, he pulls no punches, either in his music, or on stage or in his public persona. But with his upcoming record, he’s taking a completely different approach. But unlike many of his Americana brethren who are feeling compelled to speak out politically these days, Steve Earle is the unlikely performer looking to strike a chord of unity.

“I thought that, given the way things are now, it was maybe my responsibility to make a record that spoke to and for people who didn’t vote the way that I did,” Earle says. “One of the dangers that we’re in is if people like me keep thinking that everyone who voted for Trump is a racist or an asshole, then we’re fucked, because it’s simply not true. So this is one move toward something that might take a generation to change. I wanted to do something where that dialogue could begin.”

Steve Earle is looking to accomplish this by focusing on a topic where the sentiment is almost universal, and in a unique project that came about as a collaboration with a theater production. The album called Ghosts of West Virginia will be released by New West records on May 22nd. But Steve Earle is set to appear in a play called Coal Country that will be running from now until March 29th at New York’s Public Theater where he will be performing multiple songs from the upcoming album. 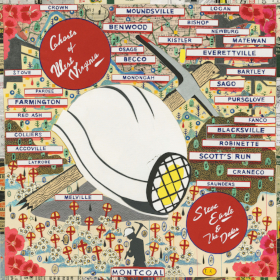 Based off of the 2010 mine tragedy at the Upper Big Branch coal mine where 29 people died in an explosion, and subsequent investigations discovered many safety violations and cover-ups, playwrights Jessica Blank and Erik Jensen created a stage production around this true story with many themes that have commonly touched country music, with Steve Earle writing songs that appear at critical moments in the production. Through the tragedy, the hope is we can all find a commonality in the narrative.

“I said I wanted to speak to people that didn’t necessarily vote the way that I did, but that doesn’t mean we don’t have anything in common. We need to learn how to communicate with each other. My involvement in this project is my little contribution to that effort. And the way to do that—and to do it impeccably—is simply to honor those guys who died at Upper Big Branch,” says Steve Earle.

Joining him in this effort once again will be his backing band The Dukes currently consisting of “The Mastersons” of Chris Masterson on guitar and Eleanor Whitmore on fiddle & vocals, Ricky Ray Jackson on pedal steel, guitar & dobro, Brad Pemberton on drums & percussion, and Jeff Hill on acoustic & electric bass, who fills the place of bass player Kelley Looney who passed away in 2019 after 30 years of playing behind Steve Earle.

Needless to say, there will be a lot of songs about coal and West Virginia on the new album, and we get a taste of that with the new song released ahead of the album, “Devil Put Coal in the Ground” (listen below). “I’ve already made the preaching-to-the-choir album,” Earle says, alluding to his 2004 album The Revolution Starts…Now. But this one will be focused on the 29 souls who perished in the Upper Big Branch mine. The record is also being dedicated to bass player Kelley Looney.

Ghosts of West Virginia is now available for pre-order.