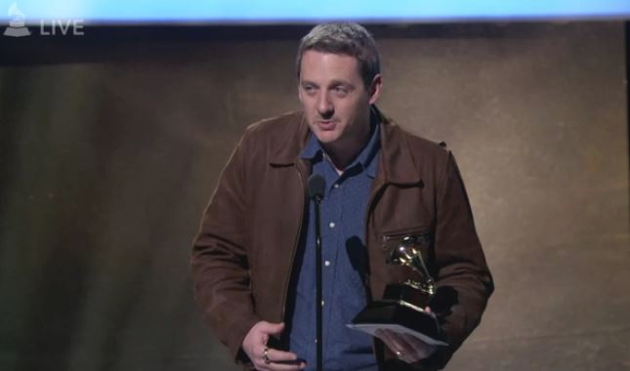 “I guess the revolution will not be televised” –Sturgill Simpson after winning Best Country Album during the Grammy’s Pre-Telecast.

The tables have been flipped and the tide has turned. Sturgill Simpson—the consummate underdog and viciously independent country songwriter and performer whose helped lead the way and kicked down doors for a country music insurgency was awarded the Grammy for Best Country Album Sunday night (2-12) during the 59th Annual Grammy Awards for his 2016 effort A Sailor’s Guide to Earth.

Though country-oriented awards shows such as the CMA’s and ACM’s make it a habit to ignore artists like Sturgill, when given a chance to be voted on beside his peers, Sturgill Simpson came out victorious.

Sturgill Simpson is also up for the all-genre Album of the Year, which at the time of this posting has not been awarded yet. The Best Country Album award, usually handed out during the telecast, was moved to the pre-telecast this year for undisclosed reasons.

“Six years ago I was in Utah working on a railroad writing songs at night, and my wife made me quit that job and move to Nashville. So thank you, babe,” Sturgill said in his acceptance speech. “About the time my last record came out, I spent the first year of his life on the road, missing him and her. And if it hadn’t been for them, I wouldn’t have written this record. So I dedicate this to my family.”

Sturgill Simpson began his country music career with a band named Sunday Valley in his home state of Kentucky. In April of 2012 he walked away from the Sunday Valley name to become a solo performer, and in June of 2013, released his debut High Top Mountain on Thirty Tigers to critical acclaim. This was followed up by Metamodern Sounds in Country Music less than a year later in May of 2014. The sophomore effort rocketed Sturgill to independent music stardom and put him on the radar of the mainstream country music industry.

A Sailor’s Guide to Earth was written like a letter to Sturgill’s son, who was born right as Metamodern Sounds in Country Music was being released. Simpson regretting missing so much time with his family on tour, and wanted to do something special for them. A week before the 2017 Grammy Awards, Sturgill and his wife welcomed their second child into the world. Simpson produced A Sailor’s Guide to Earth himself.

The victory doesn’t come with universal applause from all of Sturgill Simpson’s fans. A small, but vocal minority see it as disappointing that all of this attention is being paid to Sturgill only after he released his most non-country record to date. They would have rather seen one of his first two records, High Top Mountain or Metamodern Sounds in Country Music make the big splash.

But often when it comes to independent artists, the Grammy Awards work in arrears. Despite many pointing to Jason Isbell’s Southeastern as his best album, it wasn’t until he released Something More Than Free in 2015 that the Grammy Awards recognized the Americana songwriter with multiple statuettes. Sturgill Simpson’s signing to major label Atlantic Records before the release of A Sailor’s Guide to Earth likely played a pivotal role in receiving the high-profile Grammy nominations, and helped secure the victory.

Sturgill Simpson’s Grammy victory comes as just another step in country music’s recent memory where the era of Bro-Country fades into the distance, and artists and music of more substance continue to get recognized.