Tami Neilson Looks to Knock Socks Off with “SASSAFRASS!”

Tami Neilson is a full tilt badass monster of music, and I will puff my chest out and challenge any man, woman, or beast who dares questions the full-throated pronouncement that she is the one of the best living singers in all of roots music and beyond. Her 2014 album Dynamite! was a once-in-a-lifetime effort that stills hold up, and was followed by her 2016 tribute to her father Don’t Be Afraid.

Now she is back with a new selection of songs compiled under the name SASSAFRASS! that will be released June 1st via Outside Music, and promises to pick up where the rambunctious Dynamite! left off. Co-produced by Tami and Ben Edwards, who worked on Neilson’s previous two records, it’s an old-school rockin’ smokey bluesy soul country affair with backup singers and a horn section brought in to blow your socks off with badass tunes served at full volume.

SASSAFRASS! includes the songs “Bananas,” which plays off the Tomato-Gate scandal a few years back involving country music’s women, “Manitoba Sunrise at Motel 6” written on the day Glen Campbell died, and “Miss Jones” about another recently-passed musical icon, soul singer Sharon Jones. You can hear the opening track “Stay Outta My Business” below. Playing on the record is Tami Neilson’s Hot Rockin’ Band of Rhythm: Neil Watson on guitar and pedal steel, Brett Adams on guitar, Mike Hall on bass, and Joe McCallum on drums. 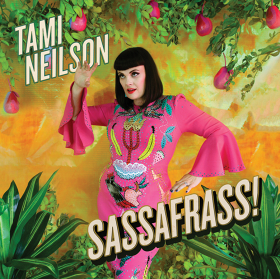 A native Canadian whose family band toured with the likes of Johnny Cash, Neilson now hails from New Zealand. She is the Queen of Country Music in the southern hemisphere, taking home 7 total New Zealand Music Awards for Best Country Album and Best Female Artist. SASSAFRASS! will definitely be one to look out for.