“Texas Cotton” Movie Soundtrack Is Worth A Listen

As albums for cover-to-cover listening, most movie soundtracks can be quite tedious, even if the music is good, and even if the movie holds a favorable grade. It’s just the fragmented nature of the contributors and styles, and the need for the soundtrack to provide the mood for the flick first and foremost before any listening enjoyment autonomous from the theatrical production becomes a concern. Even some of the most legendary soundtracks have fast forward moments, or don’t make sense unless the movie itself looms large in your personal ethos.

But some soundtracks are so good, you can enjoy them without having even seen the movie. Like a good album, a narrative plays out in your mind as you’re listening, not unlike a motion picture. This soundtrack for the little independent film called Texas Cotton falls into that category. And like any quality soundtrack, it also gives a good introduction to a bevy of important artists that can then make your listening experience sprout tentacles as you seek out further works from the respective contributors.

Matt Hillyer of Eleven Hundred Springs, Colter Wall, Carson McHone, Mike and the Moonpies, Charley Crockett, Summer Dean, and Tony Kamel are all names of cool artists from Texas and beyond that the Texas Cotton soundtrack gives you a quality introduction to, and not via tracks that fit a movie scene and not much more, but songs you could easily slide right onto one of the respective albums from these artists and still hold their piss. 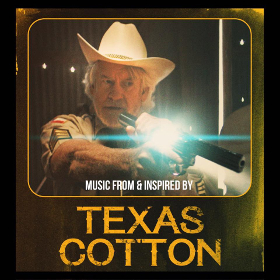 Directed by Austin filmmaker Tyler Russell, written by Jameel Khaja, and starring George Hardy (Troll 2) and Juliette Danielle (The Room), Texas Cotton is about an aging lawman who is convinced a mysterious stranger arrested in his small cotton town is innocent. His investigation stirs up a hornet’s nest that changes the town forever. The 88-minute film has received a limited release to select theaters in Texas and beyond, and can also be rented via Amazon Prime. But whether you seek the movie out, make sure to give the soundtrack a spin.

Yes, cotton is the constant that binds these ten tracks together, and as you listen to some of the most compelling independent and under-appreciated voices in country and roots music, they take you on a story arc that submerges you straight into the agrarian landscape of the Texas plains, with all the trials, joys, and tribulations playing out in songs that were meant to be heard together.

Some of the songs are sparse solo efforts, like Colter Wall’s “Raisin’ Cotton,” which holds up to the high standards he’s set for his music, or Mike Harmeier’s (Mike and the Moonpies) sorrowful “Thunder and Lightning,” to more full-bodied songs, like Carson McHone’s steel guitar-soaked “Gone Forever, Again,” or the Los Texmaniacs making sure the Hispanic heritage of Texas is represented with “Y Tequiero Ver.” Charley Crockett’s voice was made for a cotton song, and he proves it with “Just Like Snow.”

Movies and music used to be more distinctly married when soundtracks would launch massive hits that would go on to define generations. Songs and artists would become synonymous with the movies they were included in. These days many of our generation’s greatest musical voices have been relegated to the underground. But as we’ve seen with recent movies productions—from massive films like A Star Is Born to small films like Texas Cotton—movies can still play a critical roll as introduction points to quality music.