Alright, so we all had a good chuckle poking fun at the 6 Pop Country Archetypes, now let’s see what happens when I turn the poison pen towards the folks much more likely to frequent Saving Country Music; those folks that live on the fringes of the greater country music world. 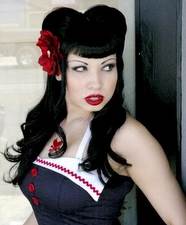 Her distinguishing features are hair as black as night, skin as white as the wind driven snow, and bangs that are angrier than Sam Kennison’s id. She may not let you tie her up and gag her like her idol Betty Page, but she will sell you a T-shirt and skull patch from your favorite underground country band. Not every angry bangs girl sells merch, but every underground merch girl must have angry bangs. It’s the law. In high school she smoked cloves and thought she was a vampire. Now she hunts zombies in her tank boots and torn fishnets. She could be a militant vegan, a violent feminist, but either way, she finds identity in being a bitch. She has sex on top, and has penis envy. She can crack a bull whip and adulates about being a sex expert. Her purse is a vintage Addams Family lunchbox. 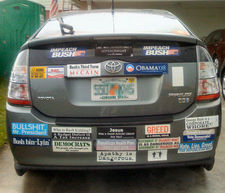 Their roots music knowledge comes from music played before NPR’s “Fresh Air”. They listen to it while driving their Prius to their office at an enviro activist think tank non-profit located in an exclusive hippie-nuveau hamlet on one of the two coasts. Steve Earle, Lucinda Williams, and James McMurtry are their favorite country artists because they “appreciate their politics”. They think Emmylou Harris is hard country. They’re referred to as “they” because unlike other Archetypes, they are non-sex specific due to their insistence of a non-sex specific environment, and push for unisex bathrooms in the workplace. They like country music that isn’t too interruptive for their cocktail party or Pilates routine. They thought The Dixie Chicks were ignorant women who let their husbands beat them and taught their kids Creationism like all Texans do . . . until they said that stuff about Bush. Now they’re martyrs and an inspiration, and they love their music. They bitch about consumerism and brand loyalty, but every electronic device they own has that cute little Apple on it. They bitch about corporations and inequality, but live in the most expensive and segregated part of town, and their investment portfolio is fully vested in Exxon/Mobil, Halliburton, and Microsoft. They don’t understand that driving a Prius or a foreign car and eating organic is not a choice, but a privilege. If you don’t agree with their politics, it’s because you’re stupid. They’re food Nazis. 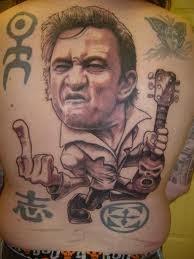 If you don’t like Hank3 godammit, then you’re not cockstrong! He’ll preach to you about REAL country music like WAYLON FUKIN’ JENNINGS, JOHNNY FUKIN’ CASH, and ALL THE HANKS! But can’t name you one song from Hank Snow or Hank Cochran, and has no idea the King of Country Music is in fact Roy Acuff. He’s unwilling to admit that Hank3 lost his relevancy in 2008 because he has his name tattooed in 3 different places. For some reason he feels the need to flip the bird EVERY SINGLE TIME a camera is trained on him. His country band is more underground than yours, bitching it gets no respect and is so much better than the “shit” they play on the radio, but his EP sounds like it was recorded in a toilet stall. He’s nothing more than a bad interpretation of Jello Biafra sporting an acoustic guitar. He complains he has no money for real equipment like the rich kids, but has $700 of ink below his right elbow. Anything that is popular or mainstream immediately sucks.

Skinny jeans, deep V-neck, vintage Keds, huge glasses and an ironic mustache, he’s not really into roots music, he just want you to think he is because it’s cool. His version of roots music involves lots of uke and kazoo, a Theremin, and improvisational interpretive dance. He couldn’t roof a doghouse, but he can strip the gears off of any 80’s-era bicycle and turn it into a “fixie” in 5 minutes. At a live show, he shows appreciation for your music by acting apathetic towards it, or his disdain by overlaughing with his friends about it. He really doesn’t like this bar or this country band, he’s just scoping out a space for his friend’s shoegazer nerdcore indie rock band to play the night after the house show at his bungalo in the gentrifying part of the city. He got a job at a fair trade coffee shop after Borders closed down.

Neo-Traditionalist: Fringed pearl snap Western shirt and matching Nudie slacks, neck scarf, bolo tie, and a Howdy Doody smile, he’s country music’s equivalent of the 30-something Dungeons & Dragons nerd. His anachronistic, outdated use of phrases like “Howdy friends and neighbors!” and “Yall-Come!” and “Honky-Tonkin!” is enough to make a Trekkie think that some perspective is needed.

Rockabilly Greaser: Very similar to the neo-traditionalist in his anachronisms, but with a little more cool factor, and a lot more Dapper Dan. High arching pompadour, wallet chain, classic car, black leather jacket, rolled up shirt sleeves and jean bottoms, even Brian Setzer is embarrassed of him. He looks tough, but during the week he sells life insurance.

West Coast Newgrass Hippie Burnout: He’s got skins if you’ve got bud. He thinks Jerry Garcia invented bluegrass, and that bluegrass and reggae are mashable. He can play bad, Kermit-the-frog-like strumming banjo for your bluegrass band, or squat in a Sequoia for weeks to stop an old-growth harvest and impress the newest hot hippie runaway girl. His dog has a hemp necklace, and looks at his dundering and irresponsible owner like a kid looks at a bad stepfather. He thinks marijuana is a legitimate cure for Cancer. He drives a 1984 Volvo and lives off a trust fund. 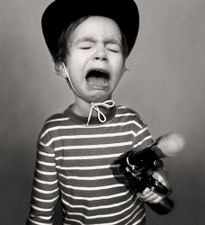 He should be using his writing skills for something productive, but instead he finds himself way too often using it for snarky dialogue picking on others. He’s bitter that the only blogs people pay attention to are the ones bashing pop country while his in-depth album reviews and features get ignored. Sometimes he needs to chill out and understand IT’S JUST MUSIC, and stop using some bands viral video as an excuse to launch into a treatise on the inner depths of importance of artistic expression in life.

He also lives in his mom’s basement, over-glorifies the obscure music he loves while bashing anything simply because it’s popular, is strictly motivated by jealousy, and has no right to criticize music because he has never played it, never written songs, and never toured as a musician, and all the other assumptions based on an easily-identifiable stereotype that just like all stereotypes and Archetypes, are usually unfair, but nonetheless funny.

And now I can officially retire this bit before it gets old. Thanks for reading.