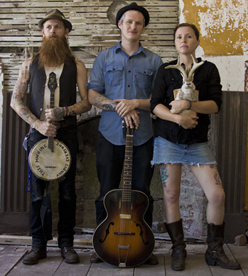 As if we needed any more validation that it is a new day in the realm of independent country roots, darn near a dozen years since The Devil Makes Three first struck a chord, they’re finally getting their due: headlining festivals, playing packed, sold out shows, and recently being signed to the prestigious New West Records, and even wrangling the legendary Buddy Miller of all people to produce their latest album I’m A Stranger Here appropriately released on Halloween week.

All of this is after a few years ago when it looked like the band could go either way. They never stopped touring or releasing new music, but frontman Pete Bernhard was releasing solo records, studying herbalism, and working at the Bohemian Grove. But something has clicked over the last few years, their live show is better than ever, and they’re riding the upswing in interest in the roots that they helped fuel themselves with their punk-infused interpretation of old time string music.

I’ll be honest with you, when I initially listened to this record, I thought it was going to be a hard sell. It’s a fairly dirty recording for starts, with no real crispness to it or a separation of the parts. Of course this was on purpose to capture the live, vintage feel that The Devil Makes Three tries to attain, but I found myself having to listen through some muddiness to really glean the lyric or the heart of the song the first few times through. It’s also a fairly sparse project, and I was worried there just wasn’t enough here to sell it to a wide audience. 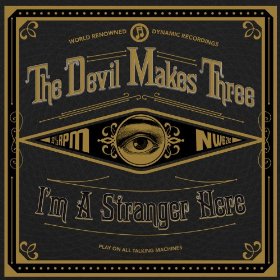 But The Devil Makes Three can’t be denied, and after a few listens, you’re wearing out your repeat button. What The Devil Makes Three does so well is the same thing Pokey LaFarge does: they pick up on all the subtleties and nuances of vintage string music, not just the big, obvious flavors and modes. What then separates The Devil Makes Three from Pokey is that they pay that appreciation forward with a punk attitude. With so many of the string bands around these days—you darn near need to affix a cattle guard to your coach just to shoo them all aside when driving through a college town—the sentiment seems to be that vintage instruments and curly mustaches are all it takes. They don’t pick up on the nuances that made old time music timeless. They’re simply playing new music with old instruments.

The Devil Makes Three are not fast players. They don’t set your head spinning with blazing technique or technical song structures made to impress you with their prowess. They simply know how to meld melody to story like few others, making their songs stick to your bones and embed in your brain until you downright crave this music. Anyone with enough time and disciple can learn how to move their fingers quickly. It’s a whole other skill set to be able to listen to music and deduce how it speaks directly to the human soul.

I’m A Stranger Here doesn’t stray too far from the traditional, 3-piece lineup of the band, with frontman Pete Bernhard, Lucia Torino on standup bass, and Cooper McBean on banjo and guitar. But there are a few horn sections, a little percussion for added flavor, and the fiddle makes a welcome appearance as well. Songs like “Worse Or Better” and “Dead Body Moving” wear down your resistance to move uncontrollably and are bolstered by Lucia Torino’s sweet harmonies. “Hallelu” and “Spinning Like A Top” make you dizzy from the deliberate use of wit in the lyrics and are finished off with an infectious melody. “Stranger” and “Forty Days” evoke the ragtime/early jazz influences that make up the unique sound of The Devil Makes Three.

This one may take a few initial spins, but you very well may find your next favorite record.  I’m A Stranger Here is finally affording The Devil Makes Three the national recognition they’ve deserved as being one of the first, and one of the best of the punk-infused string bands.

Purchase I’m A Stranger Here from The Devil Makes Three