The Greatest Drummers of All Time 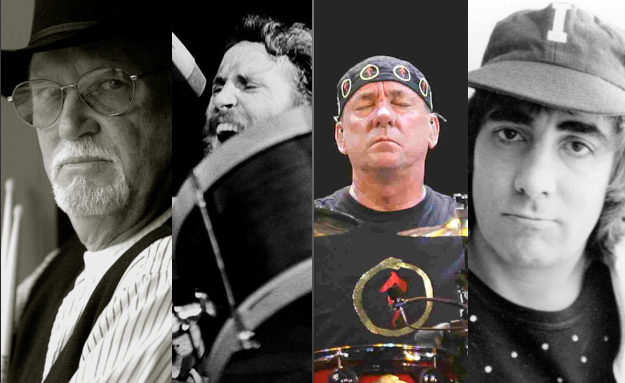 It’s the job of a drummer to be heard and not seen, to sit at the back of the stage, keep the rhythm, and stay out of the way of the melody and the message of a song. The best drummers accept this role, don’t envy the spotlight, and instead give themselves to the service of music selflessly. That’s what makes them so great. Some drummers you notice more than others, and in rock music, and perhaps jazz and other disciplines, this is much more acceptable. In country and pop, the drummer is usually the last person you want to notice. Like an offensive lineman in football, you rarely pay attention to them them unless they do something wrong.

Naming the “greatest” of anything is always a subjective exercise, and undoubtedly there are many jazz guys and heavy metal drummers that could blow most, if not all of the names below off a stage. But this isn’t just a skills competition. Influence, importance to culture, and intangibles beyond drumming all factored into the selection of the below names, and why they should be regarded as the greatest.

Feel free to leave your own opinions below.

Plain and simple, the world very well may have never known about Willie Nelson if it wasn’t for Paul “The Devil” English. When he first hooked up with Willie Nelson in Fort Worth in the 60’s, English was a street pimp, hustler, and gang leader. Willie Nelson was playing bars behind chicken wire, and trying to chase down owners for his pay. Paul’s pimp hand was strong, he saw the potential in Willie before most others, and Paul put all his muscle behind Willie 100%, becoming his personal manager and right hand man for many decades. His nickname became “The Devil” because, well, he looked like the Devil, and even started wearing a cape on stage. Today, Paul English is still keeping the beat behind Willie Nelson in concert. If you want to know what Paul English means to Willie Nelson, listen to the song “Me and Paul” off the first ever million-selling record in country music, Wanted: The Outlaws.

The late 60’s and early 70’s would see the rise of most of the legendary drummers in music history, but most all of them initially patterned themselves behind Ginger Baker. Before Ginger and Cream, drummers were mostly well-behaved side players and stayed out of the way. Baker made the drum set into another lead instrument, and sparked an abandon in the approach to drumming that spread like wildfire. There may be a few drummers who are technically better, but most fall well behind Ginger Baker when it comes to influence.

No, Levon Helm would never win a skills competition as a drummer, though try singing all of those legendary songs from The Band while still keeping the beat, and see how easy it is. Levon Helm was a great drummer no doubt, and one of those singers whose tone is immediately-recognizable throughout music. But it was just as much his spirit, and all the stuff he did off the stage to keep roots music in North America and beyond healthy, vibrant, and supported that makes him worthy of inclusion in any discussion about the greatest drummers. Levon Helm brought soul to the instrument.

“Human metronome” is an embellishment commonly given to top flight drummers, but when it comes to the drummer and partial namesake of the jam band Phish, it’s the only fair way to describe the type of pocket he’s able to not only create, but maintain amid the complexity and chaos of your average Phish song. He’s technically proficient, while never allowing the groove to leave your bones. And besides, no man rocks women’s sleeveless summer dresses and old school vacuum cleaners as vocal filters harder. In the pantheon of iconic drummers, Jon Fishman is regularly forgotten. But he shouldn’t be.

Frank Zappa was such a mad scientist of music, what he asked of his band members veered towards masochism, composing pieces that tried to find the border of technical impossibility to play. That’s the reason why so many side players left the Mothers of Invention in a huff, if they made it past the grueling audition in the first place. Terry Bozzio was one of the brave few up to the task, and not only kept up technically during Frank Zappa music sets that were more like marathons, he was able to excel and be expressive in the most hostile and challenging of musical environments.

Undoubtedly, rock snobs will see the name of the long-time drummer for Waylon Jennings amid all these other titans of sticks and skins and scoff at this as the slanted opinion of some dumb website run by a bunch of hicks. But in the realm of country music, there may have never been a more important figure from behind the rack than Richie Albright. Along with being an excellent drummer, Albright was Waylon’s right hand man for decades, giving him bonus points in the pantheon of drummers. But most importantly, it was this drummer from Arizona who conveyed the nugget of wisdom to Waylon that revolutionized country music, and brought it to its first commercial peak in the 70’s. Frustrated in the direction of his career, and the direction of country music in general, Richie suggested Waylon adopt a more rock and roll attitude in both his music and his business dealings. This idea opened up country music, and returned creative control to its artists. The country music revolution was launched off the right foot of Richie Albright pounding out that now iconic bass beat that was his signature, and it can still be heard clearly in country music today.

It’s all been said about Keith Moon, and it’s all true, aside from the naysayers that believe if he hadn’t croaked mid career, we’d never be talking about him as one of the best. Throw all rules out the window. He was Gonzo. It was beautiful chaos with no kind of technical, compositional, or intuitive structure. Just get out of his way and hope the plane lands with no casualties. Keith Moon had no peer.

It wasn’t the speed or slight-of-hand that many drummers rely upon that made John Bonham iconic and legendary, though he could call on these skills if necessary. It was his sense of how to evoke the very carnal instincts that drum beats awaken in the human mind and body, and instill it into music that made you feel like forces greater than ourselves were in play. It’s the sound of war, the sounds of the Gods that Bonham instilled in the songs of Led Zepplin that would have never resonated the same with someone else behind the drum set. There was blood and thunder in the beats of John Bonham.

There is nobody more important and influential in taking the drums from a virtually overlooked backline instrument to an iconic piece of popular music than Gene Krupa. Without this jazz titan, bandleader, and showman, it can be argued we’d not be talking about any of the other names on this list. Drumming might not even be that big of a thing in popular music. He is the father, and though many have tried to top him, he still remains one of the best.

Neil proved that virtuosity was not just confined to the realm of tonal instruments, and that rhythmic composition, just like melody & poetry, could stoke imagination, and inspire on a grand scale. An underrated lyricist as well, the hole his death leaves in music is gargantuan.

There is lots that can be said about Neil Peart’s technical prowess, his lightning fast dexterity, or his skills at composition. But the only appropriate way to describe Neil Peart is the greatest drummer of all time.

…with of course hat tips to Dave Grohl, Buddy Rich, Mitch Mitchell of The Jim Hendrix Experience, Charlie Watts, Ringo Starr, and to keep this from being an all boys club, Gina Schock of the Go Go’s, and Karen Carpenter of yes, The Carpenters, who never gets her credit as a drummer first, then a singer.