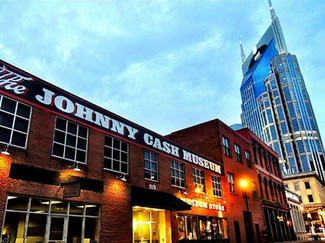 Since the Johnny Cash Museum opened in downtown Nashville in May 2013, it has become one of Music City’s must-see spots and an international destination point for country music fans and Johnny Cash fans alike. Barely a year has passed since its initial opening and the museum is already tackling its first new addition. On August 15th, the museum will unveil its “Legends of Sun Records” exhibit celebrating the legendary Memphis studio that gave rise to Elvis Presley, Carl Perkins, Jerry Lee Lewis, Roy Orbison, and of course, The Man in Black himself.

“Johnny Cash began his musical career at Sun Records,” says Johnny Cash Museum Founder Bill Miller. “Sun was the launch pad for several young men whose music would forever impact the world. Elvis Presley, Carl Perkins, Jerry Lee Lewis, Roy Orbison and Johnny came from similar backgrounds and humble beginnings. Once they walked through the door at the Memphis Recording Service, their lives would never be the same. We are proud to showcase Johnny’s labelmates from this historic period in rock and roll history.”

The Legends of Sun Records exhibit will showcase many artifacts and much information about the original class of Sun Records stars, but one man, and one particular piece of memorabilia might be worth paying a little bit of extra attention to.

W.S. “Fluke” Holland is not a name that is as familiar to music fans as the other big Sun Recordings stars, but his significance to early country and rock & roll cannot be overstated. 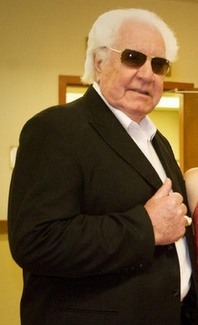 W.S. Holland was Johnny Cash’s drummer for 40 years, and is considered by many as the “Father of the Drums.” When he joined Johnny Cash’s band in 1960, the famous “Tennessee Two” officially became the “Tennessee Three,” but it was a fluke the drummer joined the band at all, leading to his now inseparable nickname.

W.S. Holland never intended to be a drummer. He was raised in Bemis, TN and worked for an air conditioning company after high school. He was a big music fan, and would go out after work to see Carl Perkins play with his two brothers at a local bar. Holland used to beat his hands on the side of the upright bass to the rhythm of music, and on a whim the Perkins clan invited Holland on a trip to Sun Records, and told him to borrow a drum set to play. One thing led to another, and W.S. Holland became one of Sun Records’ go-to session drummers.

W.S. Holland was the drummer for the famous “Million Dollar Quartet” session that matched up Johnny Cash, Carl Perkins, Elvis Presley, and Jerry Lee Lewis (he got paid $11.50 for the gig—union scale at the time). He played on many other famous Sun Records recordings, including Johnny Cash’s “I Walk The Line”, “Folsom Prison Blues”, and “Ring of Fire”, not as a member of Johnny’s band, but as a session player. Holland also played on many other famous Sun recordings, including “Blue Suede Shoes.”

Later W.S. Holland would take the same drum set used in many of those famous Sun Studios sessions, and they would become the first full drum set ever used on The Grand Ole Opry. Though Bob Wills back in 1945 brought his Texas Playboys to the Ryman, including their full-time drummer, The Opry forbade Bob from playing the drum set on stage. An argument ensued, and eventually The Opry caved and allowed the drummer to play a partial set behind a curtain. It’s said that Bob at one point said, “Move those things out on stage!” and the drums made a quick and controversial appearance, barring Bob Wills and the Texas Playboys from the Opry for life. But the set owned by W.S. “Fluke” Holland, and the set that is on display as part of the Johnny Cash Museum’s “Legends of Sun Records” is the first full drum set, and the first officially approved set to ever grace The Grand Ole Opry’s hallowed stage.

The biggest “fluke” occurred for W.S. “Fluke” Holland when he was hired by Johnny Cash to play a quick two week run of shows in New York and Atlantic City. That two weeks lasted 40 years in Johnny Cash’s band, and the rest is history. Later when Johnny Cash formed The Highwaymen with Willie Nelson, Waylon Jennings, and Kris Kristofferson, W.S. “Fluke” was the supergroup’s full-time drummer. “Fluke” also played on Cash’s “A Boy Named Sue” and “Sunday Morning Coming Down”, played on the Live at Folsom Prison and Live at San Quentin albums, and was also the session player for Bob Dylan’s Nashville Skyline record.

The quaint, four-piece drum set on display at the Johnny Cash Museum could be considered the most important drum set in this history of country music—and rock and roll music for that matter, or American music in general. Along with all the other important artifacts that make up the “Legends of Sun Records” exhibit, it makes this new museum addition a worthy visit for music fans of all stripes. 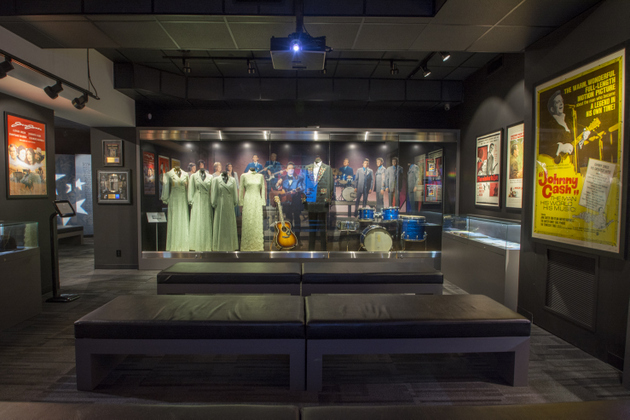 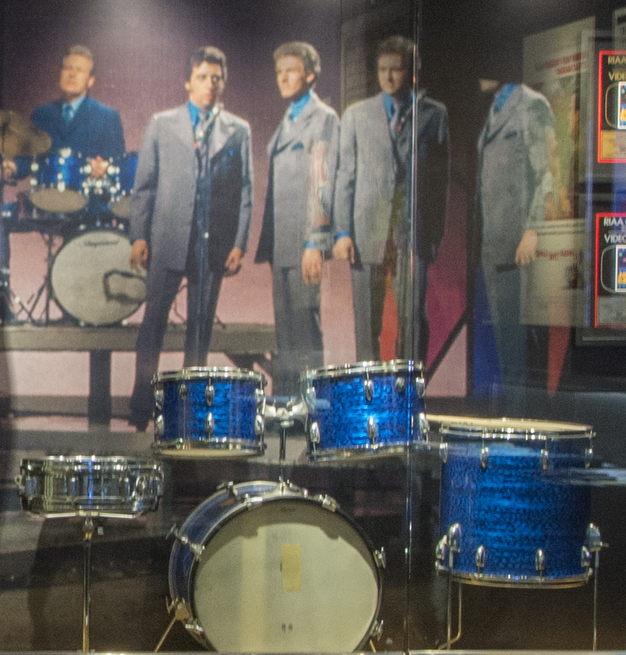