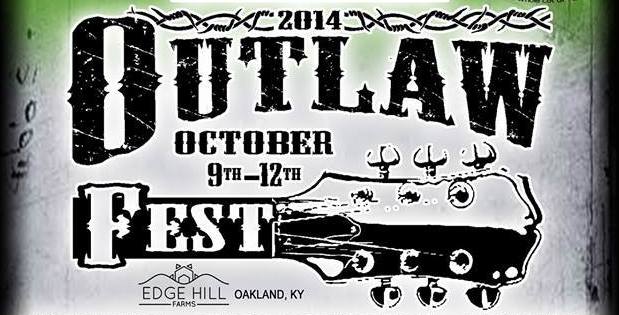 “Marty Shine” is what many of his friends call him. He’s the owner of the Moonshine Sauce Company who through a series of events over the last year or so has gone from slaving over a hot barbecue pit to playing festival promoter at this weekend’s Outlaw Fest at the Edgehill Farm in Oakland, KY.

Independent-minded artists and fans are already making their way to the inaugural gathering, looking to take in music from headliners like Billy Joe Shaver and The Steeldrivers, and music and stories from 2nd and 3rd generation Outlaws like Waylon Jennings’ son Terry Jennings, his grandson Whey Jennings, and Willie Nelson’s granddaughter Raelyn Nelson. Add on top that legendary songwriters like Billie Gant, up-and-coming stars like the Dallas Moore Band and Josh Morningstar, well-known Texas radio DJ “Big G” Gordon Ames, and Outlaw Fest has a little something of everything from the Outlaw country world.

For a while Marty Shine (aka Martin Bently) had been hauling around his barbecue rig to music festivals and other events when he had an epiphany. Actually, he had a couple of them. The first was that his barbecue sauce made with a kick of moonshine was in such high demand, he didn’t need to worry about the meat portion of the barbecue quotient. Just bottle up the sauce and save the mess. “We just sell sauce because the sauce is bigger than the cooking part of it,” Marty says.

The second epiphany is what led to Outlaw Fest. Marty was attending a festival last year—cooking barbecue and promoting his Moonshine Sauce—when he saw a problem. “I’m sitting there listening to some of the best music in the world and I’m wondering why these guys can’t play a stage like Florida Georgia Line? That was the theory behind the whole thing, that these guys deserve the same treatment that the pop country people get. But at the same token, a lot of these people don’t have the following to draw a crowd, so you add Billy Joe Shaver in there and the Steeldrivers to put more people in there.”

Marty and his Moonshine Sauce weren’t particularly well-known to the Outlaw music crowd when he showed up to the festival last year. But by the end, he knew most of them on a first name basis. “All the other food vendors pulled out and went home because it was 20 degrees. And I stayed. And that automatically made me friends with all of these people, because they actually had food and somebody cared enough to stay. Now did I lose my ass? Of course I did. But good food makes good friends.”

Marty Shine saw the potential these unheralded Outlaw artists had, but knew he had to figure out a way to get people’s attention. “I told Dallas Moore, ‘It’s my job to put asses in seats. It’s your job to make fans out of these people.’ I put the people there, you make them fans. And then next year the other names will draw more people than they did this year.”

The term “Outlaw” carries so much baggage these days, and has been corrupted and misappropriated by Music Row in Nashville so many times it’s hard to count (including the title of a recent title of a Mötley Crüe country tribute album), but Marty believes it’s worth challenging those misnomers by offering up a true example of the Outlaw approach instead of running away from the term. “To me the term ‘Outlaw’ is the epitome of what Waylon Jennings did. It’s not selling out to corporate anybody. It’s not necessarily a genre of music as it is a way of life. You hear the term ‘Outlaw’ and it conjures up different things to different people. And were doing our best to let people know it’s just the way these people do their music. They do their own thing.”

What started out as a way to promote his barbecue sauce has turned into a full blown 4-day festival with over 40 bands. Already the festival was forced to move from its original location of the Wishbone Rance to Edgehill Farm because of the expected turnout. “Our goal on the whole thing is that if we break even, then there will be an Outlaw Fest 2015. Everybody wants it to be an annual event and that’s a good thing. Because people see that we’re doing everything we can do to do it up right. I don’t know anything else to do that we’ve not done. But the long-range goal is to make this an annual event that will rival anything else out there.” 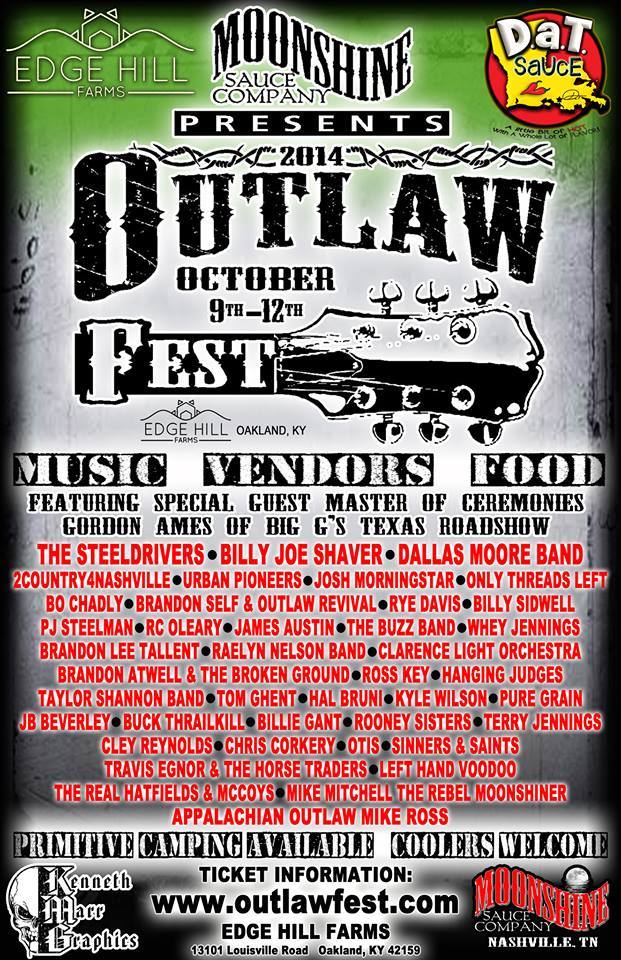