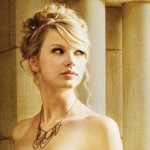 I truly sympathize with Taylor Swift, and don’t give me any bullshit about how someone with her fame and money doesn’t deserve sympathy. After 100 or so years of the American cult of celebrity experiment resulting in scores of rehabs, overdoses, and ruined lives, I think we can conclude with certitude that the combination of fame and money does not solve problems for individuals, it fuels them.

She’s a 22-year-old girl. Just in November, when being interviewed by 60 Minutes, in response to the question of being a role model she said, “I definitely think about a million people when I’m getting dressed in the morning…It would be really easy to say, ‘I’m 21 now, I do what I want, you raise your kids.’ But that’s not the truth of it. The truth of it is that every singer out there with songs on the radio is raising the next generation.”

In my 2010 article about her bombing her performances at The Grammys, (and that possibly inspired the double Grammy-winning song “Mean”) I said:

This is how it works: the mass public overly glorifies an otherwise average talent {or in this case, an average body} to make themselves feel “inspired,” and then when the fall starts for their starlet, it is meteoric, and fueled by the jealous, narcissistic hunger of the pop public, tearing that person down with all their spite, sinking their nails into their flesh and feeding like animals off their destruction to fill their vacuous egos. It is a sick, pathetic, and all too predictable cycle that I will not participate in.

And I won’t participate now, in either the flat chest line of humor, or the intellectually-indolent flesh worship, and you shouldn’t either. Can we just be thankful that for once there’s a female pop star that actually respects herself, and return that respect back lest our morbid obsession with her celebrity eventually ruins her? Turn TMZ off and find something better to do. Spend time with your kids, paint a picture, write a song, fix that toilet that’s been leaking for weeks. Christ.

Oh wait, you actually came here to see the photo?

Well fuck you, go find it yourself.