In this dirty business of monitoring the doings of Music Row, every once in a while you get these glimmers of hope that an album will slip through the mandibles of the money changers that actually has some class, and appeal beyond the easily-pliable masses. The Miranda Lambert’s of the world are not bad, but many times you still have to gerrymander your taste buds to consider where the music came from and what battles it probably took to get an album out that still sounds half way decent. In the end, the hype is usually just that.

Recently it appears Nashville has taken a cue from actors and pop stars and decided to “go country” itself. But just because an album is overtly “country” doesn’t necessarily mean it’s good. We’re all country fans, but we’re fans of good music first, and braying about how country you are and using steel and fiddle just to add a “country” taste to a song instead of employing them in tasteful instrumentation isn’t going to get you anywhere with the country fans who’ve long since strayed from the mainstream herd. 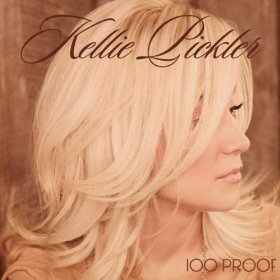 Enter Kellie Picker and her new album 100 Proof that for the last few months has been touted as her getting back to her roots and developing a hard country sound. Right out of the chute, with the first two songs “Where’s Tammy Wynette” and “Unlock That Honky Tonk” there’s no doubt this album is country, but one had to wonder if these were works of sincerity, or the female version of the overexposed “laundry list” song formula.

This whole “I’m a woman, hear me roar” bit is big right now in mainstream country, which is not necessarily a bad thing, unless it becomes overexposed. It makes a heavy appearance in the first two songs, and in the first single from the album, “Tough”. But after the album announces itself as unmistakably country, it begins to reveal itself as unmistakably good, and not just when considering it as Music Row fare from the modern era. No, this is good country music, period.

The song “Stop Cheatin’ On Me”, which initially seems burdened by the weak return of “..or I’ll start cheating on you” becomes a brilliant composition simply from it’s sonic construction; the way it builds out from the bass guitar, and modulates after the first verse. Listening to this song you can see yourself hearing it blaring from an old juke box in the corner of a bar. Same can be said for the very fun “Little House on the Highway.”

Songs like “Turn The Radio On and Dance” and “Rockaway” have this very sweet innocence to them. I’m not kidding. They harken back to the pre-Garth 80’s, when country had this simplicity to it that was sweet, when the one hit wonder model of music may have not lead to any major substance, but the songs nonetheless were just simply appealing, and seemed so easy to attach to memories.

Many of the songs on this album are not spectacular on the surface, it’s what’s going on behind-the-scenes that makes them special. Many pop country folks and “new Outlaws” are attempting to evoke Waylon Jennings these days by screaming his name alongside inane countryisms. Kellie instead understands that Waylon worked from the backbone of the music, a trick Waylon picked up on when crossing the tracks in Littlefield and Lubbock to hang out in the blues and jazz bars. The bass on this album, just like Jennings, creates a visceral bed for the music that allows it to shoot straight into your heart. This album should be listened to loud, on a good-booming system. The bigger the better.

And though I did not care for a few of the songs here, including the title track “100 Proof”, there’s some songs with undeniable soul. That’s right, “soul” from Music Row. The song “Mother’s Day” drops the Southern accent and is just Kellie singing straight from the heart, with her smooth and fiercely-feminine voice. The album concludes with “The Letter (To Daddy)” that could evoke tears from a rock.

What’s that you say? Kellie Pickler is an American Idol alum? You know what, I don’t even know that I care. And I’m not sure if Kellie Pickler herself is to blame for the beauty of this album, or if it’s the fault of producers and professional songwriters. All I know is that it’s damn good, and I don’t just mean good for the mainstream. It’s just good, period. Sure, there’s a few songs that are misses, every album has them, and the misses here you can easily label as pop country dribble. But I’d say 100 Proof will even smoke most of what’s coming out of the independent world these days.

If you are truly a fan of country music and have an open heart, you will like 100 Proof. In the Tammy Wynette, Loretta Lynn mold, 100 Proof revives the lost appreciation for the strong, yet sweet country woman, while staying away from the surface symbolism that erodes the substance from many of the other artists that attempt this difficult feat. This is one of the best albums to come off of Music Row in years, and may turn out to be one of the best in 2012, period–an opinion I fear we may see validated in lackluster sales and the absence of hit singles from it. The mainstream may not support in en masse, but I will.