Who would place the burden of trying to inch forward the entrenched and oligarchical ways of mainstream country’s stodgy iron works in the hands of a 40-year old lesbian from Washington State like Brandy Clark, or a mother of five living in Massachusetts like Lori McKenna? Not many, including probably themselves. Yet in 2016, they are some of the most responsible for forward progress. These women are not trying to save country music. They’re just trying to put what they feel into words in a way most of the rest of us can’t. They possesses the virtue of insight and the talent to articulate it in a way that compels you to listen intently.

Timing is so incredibly crucial to a music career, and the capriciousness with which time seems to select certain artists to thrive, and others to fester in obscurity is as frustrating as it is inherently unfair, and it’s folly to think that we in any way can reform this phenomenon. What led to the rise of Sturgill Simpson, Chris Stapleton, and Jason Isbell over the last couple of years? There have always been extraordinary artists in the songwriting ranks, Americana, and the underground waiting to be heard, but it happened to be those three were in the midst of a rising action in their careers right as the peak of Bro-Country was creating a necessity and appetite for their music as an alternative and counterweight like never before. Townes Van Zandt never really got to enjoy the accolades his music eventually bestowed. It was only after his passing that due credit was doled out.

Lori McKenna couldn’t have known when she wrote “Girl Crush” with Hillary Lindsey and Liz Rose that it would go on to win the CMA and ACM for Song of the Year, and a Grammy. She couldn’t have anticipated that her song “Humble and Kind,” recorded by Tim McGraw would become the first solo-written #1 song to top the country charts in four years right as she was getting ready to release an album produced by Dave Cobb—one of the hottest names in Nashville, and one of the principles responsible for the rising action of many other benevolent country artists. It happens to be that Lori McKenna’s name was already on the tip of our tongues as The Bird & The Rifle hits the shelves, and some were ballyhooing it as the best album of 2016 so far. 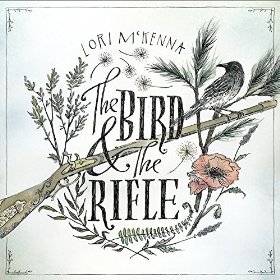 Timing has not always been on Lori McKenna’s side though. This isn’t the debut record of a behind-the-scenes songwriter finally emerging from the shadows to take center stage, this is Lori’s ninth record believe it or not, including a major label debut called Unglamorous she released in 2007 after signing to Warner Bros. Nashville. But this may be her most important. Because of the timing.

Despite all the obstacles that still stand in the way of true artists getting their music heard, songwriting is still respected in Nashville and it remains a backdoor into the industry, especially for female artists. It worked for Kacey Musgraves, it worked for Brandy Clark, and now it’s working for Lori McKenna. Don’t expect her to be out on tour opening for Kenny Chesney anytime soon (though she’s opened shows for Tim McGraw in the past), and you won’t hear any of her own songs being played on mainstream country radio. But her songs are there through other artists, and unlike some of Chris Stapleton’s mainstream radio contributions, McKenna’s are more an attribute than a burden.

It’s not that the subject matter of The Bird & The Rifle is so out of the ordinary. There are the songs about small town life like “Giving Up On Your Hometown” and “We Were Cool.” There are odes to self-destruction like “Wreck You,” or relationships gone bad such as “Old Men, Young Women.” But for someone who has written hit songs, and within the Nashville system (despite not living there), Lori McKenna has a writing style that is wholly her own, derivative of nobody, indicative of writing that has come before her only in how the quality is high enough that you know instantly it will endure.

There’s not much to the music of The Bird & The Rifle—just Lori’s singing, some acoustic guitar and drums, and a little Mellotron in the background. Dave Cobb is a producer for the proletariat in the sense that he puts out a lot of projects annually, where many of Nashville’s other producers can only work on maybe two or three albums a year. One side-effect of the Dave Cobb workload and the organic approach is you get some stripped-down albums. Some may also shy away from using a Mellotron as artificial. It is meant to infuse the sound of strings on albums without having to rent out a string section, and has become a signature of the Dave Cobb sound.

For McKenna, the Cobb approach was quite complimenting of her style because these are songs you want to listen to intently, and the music doesn’t need to get in the way. It’s a very warm-feeling record, complimenting Lori’s warm voice that is not exceptional in any way, but is immediately familiar and welcome like a new friend that feels like an old one.

Lori McKenna’s The Bird & The Rifle is not going to become some major blockbuster because despite all the efforts, country women continue to be ignored. But to the listeners that matter, it will loom large, and possibly larger than any other release. It’s also an excellent bridge between independent Americana and the radio mainstream because McKenna can exist in both those worlds. And most importantly, it is exquisitely written, with one insightful turn of phrase after another. It’s a songwriter’s album in every sense, and a joyful experience.