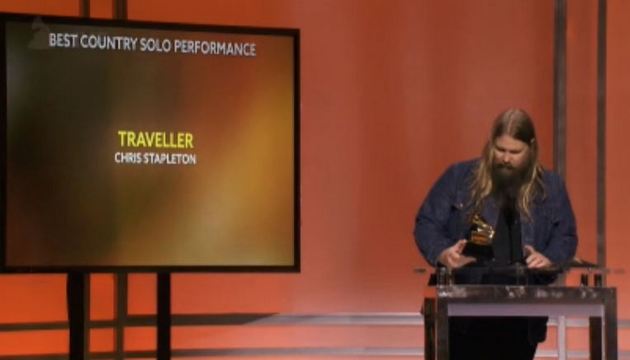 Add a Grammy to the war chest for Chris Stapleton.

During the 48th Annual Grammy Awards pre-telecast Monday afternoon, the rising country star and Kentucky born songwriter walked away with the Grammy for “Best Country Solo Performance” for his fine work on the title track to his debut solo album, Traveller. Stapleton beat out Keith Urban, Carrie Underwood, Cam, and Lee Ann Womack for the distinction.

“I’ve sat out in this audience a couple of different times. Third times a charm I guess,” Stapleton said as he took the podium. “Man, I don’t know what to say. I’d like to thank my wife, always pushing me to do good things, and all the guys in the band that played on it. J.T. Cure, Robby Turner, Mike Webb, Dave Cobb, the GREAT Dave Cobb, Universal, Red Light. I don’t know what to say. Thank you very much.”

The win comes as Chris Stapleton is also up for the evening’s biggest award, the all-genre Album of the Year to be handed out later Monday evening. All the attention comes as Chris Stapleton has been experiencing a meteoric rise after his wins and performance at the 2015 CMA awards in early November. Stapleton walked away with New Artist of the Year, Album of the Year, and Male Vocalist of the Year, and sang with Justin Timberlake in a performance that resulted in a massive bump in named recognition and appreciation for the songwriter. Since then his album Traveller has logged 12 weeks as the #1 album in country music.

The Grammy pre-telecast was a family affair for Stapleton. His former band The SteelDrivers won the Grammy for Best Bluegrass Album for The Muscle Shoals Recordings. His producer Dave Cobb was also mentioned as part of Jason Isbell’s big wins for Best Americana Album, and Best American Roots Song.

Other pre-telecast winners include Bela Fleck & Abigail Washburn for Best Folk Album, and Best American Roots Performance went to Mavis Staples for “See That My Grave Is Kept Clean.”