You can get downright humid-eyed when remembering some of the great modern revivalist bands of country music who are so unfortunately no longer around, outfits like BR549 and the .357 String Band. When a band that is so adept at recruiting new true country converts to the cause goes belly up, it makes the task of Saving Country Music that much harder.

When naming off bands and artists that were leaders of the late 90’s neo-traditional movement in independent country, an act often overlooked is North Carolina’s Two Dollar Pistols and their point man John Howie Jr. Started in 1996 and signed to the independent powerhouse label Yep Rock, the Two Dollar Pistols released five superb full-length albums and an EP before their breakup in 2008. The 1999 EP with then-unknown fellow North Carolinian Tift Merritt is given credit in many circles for launching the songstress’s career. Like the Two Dollar Pistols, Cackalacky is too often carelessly overlooked as one of the nation’s premier music regions, harboring numerous music towns like Chapel Hill and Boone, and it’s own distinct musical traditions and dialects. 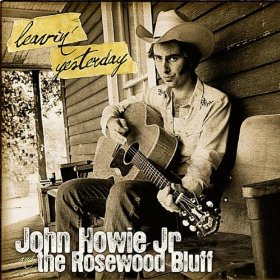 After the dissolving of the Two Dollar Pistols, John Howie Jr. soldiered on, playing in a regional all-star band called The Sweethearts, and forming Rosewood Bluff along with Two Dollar Pistols drummer Matt Brown. In 2011 they reunited with well-known producer Brian Paulson who produced the Pistols’ final Yep Roc album, and Rosewood Bluff released their first album Leavin’ Yesterday, a brilliantly-written, steadfastly country old school tearjerker that doesn’t relent on the heartaches once in the album’s 13 stellar tracks. Just a glance at song titles like “I’m So Happy I Could Cry” and “That Makes 3 Of Us” lets you know you’re in store for a stone cold and felonious hard country heart stabbing.

Drenched in pedal steel guitar, John Howie Jr. illustrates in Leavin’ Yesterday how you can still revive the classic country sound without being cliche. No lonesome train whistles on this album, just sincere ballads of heartbreak that will always be pertinent to the human condition no matter what the place and time. This album could squeeze tears from a turnip, yet has great variety that never allows the album to stale or eddy. The songwriting, simple tempo changes between songs, and adding strings to a couple of tracks keeps the country ear engaged with this album from stem to stern. And what old-school class on John Howie’s part to put possibly the album’s best song and the title track very last on the album.

As much credit is due to John Howie Jr. for writing these songs and singing them with such patent authenticity, pedal steel guitar player Nathan Golub bears responsibility for really tying Leavin’ Yesterday together with one of the most tasteful instrumental performances I’ve heard in a while. He hits all the right notes, not wowing you with technique, but winning you over from his uncanny ear for hearing what the song is begging for. All of Rosewood Bluff deserves praise for bringing flesh to John Howie’s vision.

For people who’ve never heard of John Howie Jr. or the Two Dollar Pistols before, Leavin’ Yesterday opens up a new vein of country music to discover, while also making you giddy for what John Howie Jr. and Rosewood Bluff may be throwing down in the future.