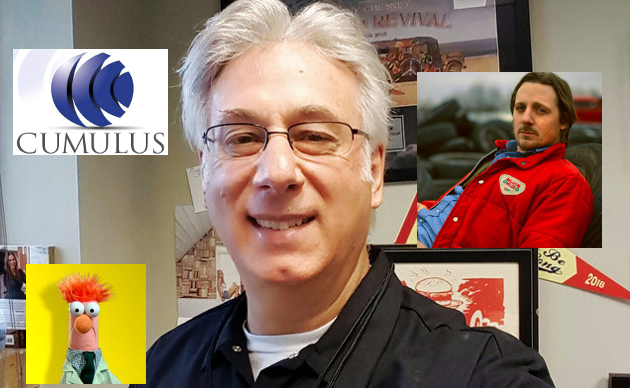 The country music genre used to be full of people who were passionate about the art form. They found purpose behind bringing the music to people, and that is why they decided to become performers, songwriters, side players, DJs, managers, publicists, roadies, journalists, or whatever it took to push the music forward and to be a part of it. Often sacrifices were made in their lives, personally and financially, because they loved the music so much, they wanted it to be involved no matter the cost.

Today, country music is simply a commodity, and often not even one that has sonic ties to what the music was, or is supposed to be. Artists regularly complain about how stifling the format is. Others simply record and perform songs because it’s what they’re told to do. Often the very people working in the business know the music is subpar. DJs and Program Directors who decide what the masses listen to aren’t even fans of country music, from yesterday or today. But they all collectively push the “country music” of today forward because it’s their job.

This was illustrated perfectly by the opinions shared by the Vice President for Country Formats for Cumulus Media, Charlie Cook, in a short form profile that appears in the current issue of Country Aircheck. The country radio trade periodical regularly profiles industry professionals in quick, quippy features like this, and of course it’s never a fair encapsulation of anyone’s entire body of work, or the breadth of their opinions on music. But it is a good illustration of just how deep the disconnect is today between the music, and those whose job it is to serve it to the public. 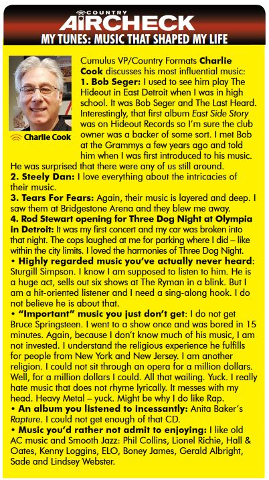 The Vice President for Country Formats for the 2nd Largest radio station owner in the United States says that his top three favorite artists are Bob Seger, Steely Dan, and Tears for Fears. His favorite concert was Rod Stewart opening for Three Dog Night. He also mentions Phil Collins, Hall & Oates, Kenny Loggins, ELO, and others as his favorites without ever mentioning a country artist in a positive manner. In fact in the whole piece, the only artist Charlie Cook mentions that has any ties to country music at all is Sturgill Simpson, of whom he says,

“I know I’m supposed to listen to him. He’s a huge act, sells out six shows at the Ryman in a blink. But I am a hit-oriented listener and I need a sing-along hook. I do not believe he is about that.”

If you’re wondering why artists such as Sturgill Simpson and others are never even considered for radio play, here’s your answer.

Okay so Charlie Cook is an 80’s kid and a classic rock junkie. You can’t fault the guy for that. But why is he one of the top heads at Cumulus Media helping to choose the content for country stations? He couldn’t even say he was a big fan of Blake Shelton, Miranda Lambert, or even Florida Georgia Line. How did he achieve this position without any passion for the music itself?

Now imagine this same assessment being made time and time again as you query the ranks of professionals in the positions of power throughout the country music industry, and you have the answer to why the best stuff in country music doesn’t get pushed to the top, why there seems to be no enthusiasm for the music from the professional tasked to serve it, and why it all just comes across as an artifice of a commercial industry as opposed to a true effort to find and support the best country music expressions of our time.

And by-the-way, if you think this is a one-off misstep by Charlie Cook, he once characterized older country music as a “‘C’ student” and today’s country as an “‘A’ student,” and specifically in regards to the programming of the more classic-oriented WSM-FM in Nashville, which regularly beats out the pop country station WSIX in the ratings. He also admitted in the same interview to taking the Dixie Chicks out of rotation when they went on their reunion tour in 2016.

Country fans care deeply about country music, including mainstream pop country fans. It is a part of their lives, it helps get them through each day. It courses through their blood, and gives them a lust for life. It would be great if the people who decided what country fans listen to shared a similar passion and zeal. But often these people in positions of power are passive listeners, making different (and better) musical choices for themselves than the ones they make for others. Charlie Cook can’t even bring himself to listen to the garbage he programs.

This is also the reason why much of today’s country music sounds like nothing more than rehashed classic rock. Here’s looking at you, Jake Owen. It’s also one of the reasons Cumulus is currently in bankruptcy, and iHeartMedia will be there in mere moments.

Here’s your snapshot of the country music industry, ladies and gentlemen.

A screenshot of the Charlie Cook interview went viral on Twitter after Grady Smith tweeted it. Jason Isbell and others jumped on board.