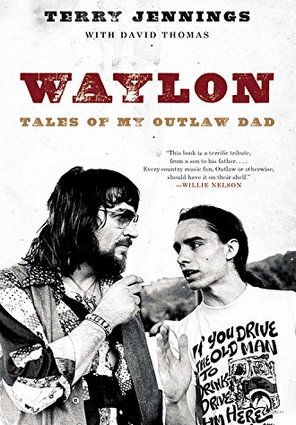 For those that can’t get enough Waylon, they’ll get a healthy dose from a brand new perspective on April 19th when Waylon’s eldest son, Terry Jennings, releases a new book entitled Waylon: Tales of My Outlaw Dad. The 272-page memoir will be released by Hachette Books, and was written with help from author David Thomas.

Waylon Jennings was just 19-years-ol when Terry was born, and by the age of 15, Terry had dropped out of school and was a regular roadie working for his father. During that time, Terry not only got to witness the rise of his father to the status of a country legend and a Hall of Famer, but he got to see performers like Willie Nelson, Johnny Cash, Kris Kristofferson, and Waylon’s final wife Jessi Colter do the same. Though the years, Terry became less like a son, and more like a brother to Waylon, later taking over management duties and becoming one of Waylon’s closest confidants.

Waylon: Tales of My Outlaw Dad is said to take an unfiltered look at the hard partying lifestyle centered around country music at the time, telling never-before-heard stories and debunking myths about Waylon, while also talking about the “unlikely but devoted family man” and how Waylon overcame his demons. The books is said to be “strikingly honest” about its portrayal of Waylon’s life.

Terry Jennings currently lives near Waco, and is the CEO and founder of Korban Music Group LLC, a music management and publishing company. He’s also worked as a talent scout for RCA, and in other capacities in the music industry over the years. Though there’s other accounts of Waylon’s life out there, Waylon: Tales of My Outlaw Dad will take a unique perspective being told from the eyes of Waylon’s son.

Willie Nelson and Dolly Parton have also lent testimonials to the effort.

“Waylon Jennings and I first met in the mid ’60s backstage at JD’s in Phoenix. We would go on to record duets, write songs, cut records and tour together for over three decades. We had our differences, but our friendship always endured. I considered Waylon one of my best friends. Packed with funny, insightful tales of life on the road, this book is a terrific tribute, from a son to his father. A father who happens to be one of Texas and Nashville’s greatest musicians. Every country music fan, Outlaw or otherwise, should have it on their shelf.””•Willie Nelson

“I’m so excited about Terry’s new book. Waylon Jennings has always been one of my favorite singers of all time. I loved his voice. He was completely different from anybody else. And I always wanted to either do a whole album with him or at least a duet song; but I never got the chance. That will always be one of my great regrets. Waylon was a wonderful human being as well. He reminded me very much of my own people in his tenderness, kindness, his understanding and his personality. I think of him often.””•Dolly Parton