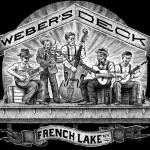 Like I always say, music is just the excuse. Saving Country Music is about people and community. And I can’t think of a better example to illustrate how you can create community through music than Weber’s Deck.

Weber’s Deck is the brain child of Casey Weber, who lives in the small town of French Lake, Minnesota, pop. 22. A few years ago Casey started a seasonal, weekly event where for donations only, musicians would play on his back deck every Sunday afternoon during Minnesota’s brief, 9-week summer. Weber’s Deck might be the best success story of the house concert trend that is helping to alleviate some of the pressure on touring bands trying to find places to play and crowds that actually listen, and it might be the best prototype of how to create a successful local-oriented music event.

Last year the Weber’s Deck finale on Labor Day drew over 1,200 people to French Lake. Casey Weber makes no money off the events. All donations taken in from attendees goes straight to the roots artists that perform. But what Casey and French Lake do get is a sense of community that is virtually extinct in our society, and the satisfaction of helping out struggling artists.

Coming up on Casey’s third season of Weber’s Deck, I talked to him about his fascinating brain child. You can find the full audio below, and the bigger points are transcribed below as well.

Triggerman: Why don’t you explain to people, “What is Weber’s Deck”?

Casey Weber: I bought a house in central Minnesota, obviously always being a big live music fan, I built a deck on my house and made the railing removable on one end, basically to have a couple of bands play my house warming party. And it turned into inviting a couple of friends on a Sunday afternoon for a small town gathering. I live in a town of 22 people, the town of French Lake, Minnesota. It was kind of a throw back to these small town gatherings in rural America, where you could actually go and meet your neighbor, and at the same time listen to some decent music.

So we started inviting musicians out on Sundays, offering them a place to play and a crowd that was willing to listen. We started with Charlie Parr and Drew Peterson, and at our first show, we had 90 people show up and throw their donations in the bucket, and that gave us an indication this would work. And with the help of volunteers and anybody who would help out, we started doing it every single Sunday. And we go nine weeks each Sunday in the summertime, it runs for about 5 hours. 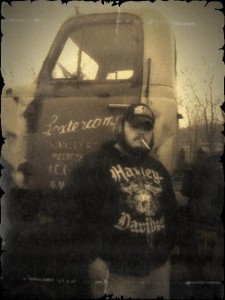 Triggerman: So you’re saying it’s donation driven. This is simply a way to support the music.

Casey Weber: That’s what it’s all about, and that’s what I want it to be all about, to support the music and also that sense of community. I want to make it a place that’s family and kid friendly, bring a cooler of beer or pop, chill out, and not have money be a determining factor of whether they can do this. It’s a cheap, essentially free way to come out and enjoy music. It’s almost throwing it back in the face of these bar and venue owners who’ve been screwing these musicians for years and years.

Triggerman: You have all these bands coming through there (French Lake), they have no guarantee of how much money they’re going to make, it’s almost like the mystique of Weber’s Deck draws them there.

Casey Weber: We’re a quick 45 minute drive out of downtown Minneapolis. It’s a no guarantee show. We just guarantee them a good crowd, and we’ve never had one baulk about the money. The hardest thing about Weber’s Deck is basically having 42 slots for the summer, and having 200 emails from bands. It’s not an easy choice to make.

Triggerman: So you’re doing these concerts on your little deck behind your house in a town of 22 people, and one of your concerns is weeding down the bands that want to play there?

Casey Weber: Yeah, absolutely. It’s amazing what it’s been built in to. You want to give everyone an opportunity. Being in Minnesota our summer is about 9 weeks. And they’re all great bands, every single one of them, but it’s so hard to make room. This summer I’m going to start Weber’s Deck fireside songwriting sessions, just to try to help alleviate that problem, throw some more musicians up on the Friday or Saturday before the show, and basically have a bonfire show at my place.

Triggerman: I remember seeing a massage from you somewhere a while back that said something to the effect of: “It’s not just bands traveling now, it’s people traveling now to see music.” Have you had people coming from far away? 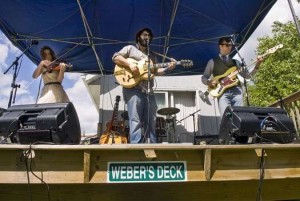 Casey Weber: Oh, sure I have. I think if you put the right people in the right place, people will come to it. And it’s not just the musicians people are coming to see, people have become friends through Facebook or whatever and are coming from all over the country to see each other. One thing I want people to know is this can be done anywhere. A lot of these bands are looking for places, somewhere where people are going to listen to them, and not just be ambient noise in the back of a bar filled with shitfaced people.

Triggerman: Weber’s Deck is it’s probably too big to call a house concert, but it’s also too small to call it a festival. There seems to be this emerging trend of house concerts, of which Weber’s Deck is at the top of that list in regards to the talent you’re bringing in, and just the whole community you’ve created. Most house concerts happen in their living room for 10-15 people. Do you see this trend continuing, and do you think this trend of house concerts speaks to the politics and the environment for artists right now who are trying to make a living playing music on the road?

Casey Weber: At Weber’s Deck, every single dollar that is donated is handed straight to the musicians. There is absolutely no money made out here. In fact it costs me money to put it on. It’s a small price to pay to put the music in front of the people, and the people in front of the musicians. I think it is a trend with the house concerts coming up, especially with some of these musicians we listen to because they’re songwriters. They actually have something to say. So I think with these house concerts, I think people are starting to catch on, whether they become hosts or fans, I think it’s a great thing. I think putting these people in more of a personal space is just going to sell more albums honestly.

Triggerman: So the Webber’s Deck patron is going to be more attentive, more supportive of an artist. If you’re only playing for 25 people at Weber’s Deck, you may get more effectiveness out of that than playing for 200 people in a crowded bar where everyone is trying to talk over the music. 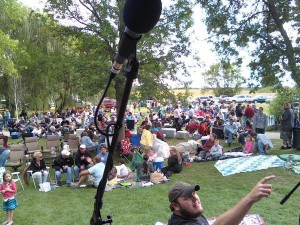 Casey Weber: Absolutely and it shows. It shows in merch sales every week. The numbers prove it. If you put these people in front of a small, intimate crowd, they’re going to buy your album at the end of the day.

Triggerman: So how bad do your neighbor’s hate you? Somebody is out there listening to this or reading this saying, “Man, that guy must have some really cool neighbors.” Explain the dynamic around Weber’s Deck.

Casey Weber: Like I said it’s a very small rural community. The town of French Lake has five houses, and I own one of them. Beside me is a town hall that allows me use of their large parking lot. The neighbors right next to me actually own the one gas station in town across the street. They love it. They’re big live music fans themselves. They’ll come over and watch and make their kids work at the gas station because Weber’s Deck is in such a small community, it brings huge business to that gas station. On a typical Sunday, we have somewhere between 150-300 people in my yard. They’ve (the gas station) been going since 1909, and I talked to the owner and last Labor Day weekend, when I had my final show last year, we had about 1200 folks come out to enjoy the music, it was his biggest day in over 100 years.

That goes back to the idea of supporting the community. They need this business, and they are more than willing to support because they like the idea of it, it’s kind of a throwback.