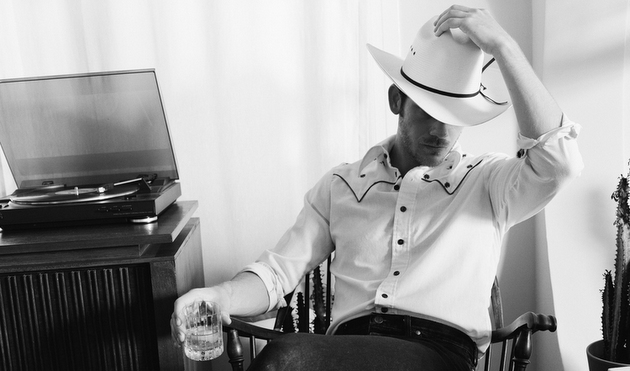 Sam Outlaw is not his real name. Well, not really. His real name is Sam Morgan. But his mother’s maiden name is Outlaw, so it’s close. But he’s not a real Outlaw. Nor is he a real cowboy, even though he apparently owns a fine collection of over half a dozen Stetsons. The 32-year-old Sam Outlaw was an advertising salesman up to a few months ago. He’s from Los Angeles, and has lived there ever since he was 10-years-old. And now he’s one of the most highly-buzzed country artists in Americana.

Looking at pictures of Sam Outlaw, he certainly has the throwback style down, and there’s certainly plenty of money behind his pursuit of a country career. Not too often do you hear of artists who’ve yet to release a long player or tour extensively getting booked at Stagecoach, being featured at SXSW, and finding their way onto the Americana Fest lineup. He’s opened for Dwight Yoakam, Clint Black, Asleep At The Wheel, and had CMT premier one of his videos. For all intents and purposes, Sam Outlaw is the independent roots version of a preordained superstar, receiving wide praise and high acclaim before he’s really done much of anything.

But it’s not as if Sam Outlaw isn’t aware of this. It’s more about you needing to be aware of it to grasp a full understanding of his narrative. He didn’t adopt the Sam Outlaw name just for marketing. In some respects, it was a challenge to himself: Don’t hide from the thinness of your authenticity, spell it out, thrust it in people’s faces, and be the first to address it. And if you can overcome that, the rest will be easy.

While many of our favorite artists were being spit out of young adulthood with the burden of rehab stints, big debt, and bad tattoos, Sam Outlaw was working a straight job and assembling a war chest to fund his eventual move into the Americana scene. Yeah, what a goal to work towards when you consider Americana’s low ceiling of success and shitty pay compared to the professional world. But Sam had a passion. Sam Morgan became Sam Outlaw in an epiphany moment of not wanting to spend the rest of his life in advertising. His mother’s passing also laid the groundwork for a life-altering career change, and it’s another reason he chose to adopt the “Outlaw” name.

“I wish that I could hold my mama once more before she leaves. But I can’t. No I can’t,” Outlaw writes in the song “Ghost Town.” 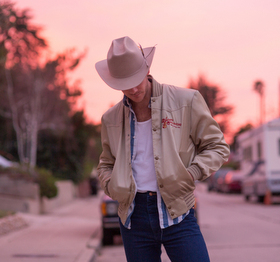 But Sam Outlaw’s sound really isn’t Bakersfield, though there’s certainly some of that influence. It’s just as indicative of Countrypolitan, and maybe more indicative of L.A. than anything. It’s the haze that creates a sepia hue over everything in the city; it’s the way the streets are so full of electricity and desperation all at the same time. If you listen intently, this is what you will hear beneath Sam Outlaw’s music. There’s a glamor and a slickness, but also a desert emptiness and a forlorn contemplation of vacated dreams.

You have every right to be suspicious of Sam Outlaw. And knowing how short his own history is in this discipline, he employed Ry Cooder, Ry’s son Joachim, and a slew of other Americana notables to help record and produce this record. Western Americana may be a fair summation of the sound, but Sam really touches on a lot of different influences by the time Angeleno concludes. 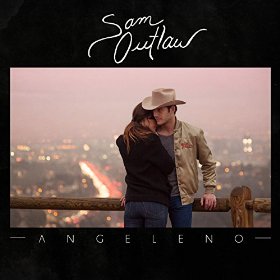 “I’m Not Jealous” and “Country Love Song” show some serious skills at writing country songs, though they are both steeped in to completely different classic country eras. The strings of “Angeleno,” and the Mariachi horns of “Who Do You Think You Are? ” are indicative of the high production value of the by-gone “Nashville Sound.” For the most part, Angeleno is one strong song after another, and after a few minutes, you’re much more interested in the music than the back story.

There’s also a few moments on Angeleno that give you pause, and play into your concerns that maybe this is an ex advertising man getting you to buy into something that is not entirely real. You just can’t trust some millennials these days with the amount of irony and sarcasm imbued in their culture, and despite Sam being a little old for that designation, “Jesus Take the Wheel (And Drive Me to a Bar)” may be a little too cornpone, ironic, and clichÃ© for someone like Sam Outlaw to pull off. Not that the song doesn’t work, but he’s not exactly Bobby Bare, and he’s certainly not Carrie Underwood.

Some of the production and songwriting also veers into territory that makes you question if this isn’t some version of soft rock set to country styling. Despite the title of “Old Fashioned” and the steel guitar intro, the song veers uncomfortably toward yacht rock in moments, sullying and otherwise well-written song. “Keep A Close Eye On Me” also falls prey to being too slick, despite its gospel heart.

Other songs are spot on with their approach, even though ultimately Sam Outlaw might offer a softer version of country than some may want, or his “Outlaw” moniker might lead you to believe. “Ghost Town” and “It Might Kill Me” make for excellent selections, and the ending “Hole Down In My Heart” is one of the album’s few moments of loose spontaneity.

Sam Outlaw can’t change his past and pretend he’s a honky tonk roughneck, nor should he try to. And anyone who bases their appeal of music on who it’s coming from as opposed to the music itself is putting an undue limitation on their listening experience. At the same time, Sam Outlaw is a new artist, and the push and hype behind him might be outpacing his output so far. Angeleno is a very solid release, and it would not be unfair if some choose to label it their favorite of the year. But I want to see this project develop a little more before showering it too heavily with plaudits. I want to see some adversity test its resolve, and a few years on the road give a nice brown sweat ring around the skull of Sam’s Stetson. Then we can start talking about his place as a real Outlaw, or as a torch bearer for authentic country moving forward.

In the meantime, I will really enjoy this music, and recommend it for your listening.