Where The Hell Has Hank3 Been? 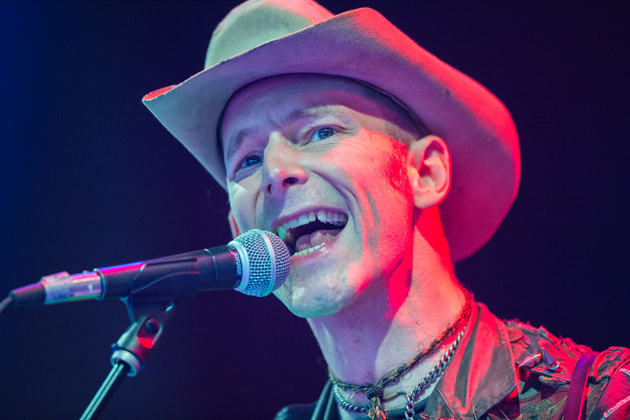 Moving, that’s where. Fans have been wondering where the third generation country performer has been for the past 18+ months after a prolonged touring hiatus, and no new album since Brothers of the 4X4 and A Fiendish Threat back in 2013. Hank3 already told us previously he needed to recoup his investment in his last two albums before he could release another, but the reason he’s been off the road lately is because his home life has been in upheaval.

Though no reason was given for why he was moving, Hank3 explained to SiriusXM’s Alamo Jones that he’s vacating his semi-famous “Haunted Ranch” in east Nashville. And packing and hauling all his accumulated stuff has proved to be a herculean effort.

“Been having to rebuild camp,” Hank3 said as he co-hosted a show with Alamo Jones from the famous Jack Clement Cowboy Arms Hotel and Recording Spa in Nashville. The show aired last Saturday (1-16) on Outlaw Country Channel 60. “No camp, no war. So once the camp is officially taken care of, we’ll be back in the trenches … Musical gear and all that stuff just piles up. You hold on to everything. It’s almost like homesteading in its own sort of certain way.”

So when might Hank3 finish his move and hit the road again?

“Yeah, it’s coming man,” he says. “First thing we’ll do when it’s not even half way set up, we’ll try to do a run, just to see what crew is gonna make it back, and who’s not, and all that fun stuff. But it’s around the corner for us.”

Hank says he had a difficult time finding a new place that would meet all of his criteria. That’s one of the reasons things have taken so long.

“It’s got a little bit of everything man,” he says of his new compound. “We’ll be able to … hell we could grow our own tobacco if we wanted to out there … After 10 years on the road I’m like ‘Well, I’m at least gonna ride on a bus. If I’m pulling 14 guys with me, we’re gonna be able to sleep at night … So just getting a 45-foot bus with a 16-foot trailer up on a ridge? If it ain’t laid out right it ain’t gonna happen. And since we rent we don’t own, half the rock stars out there are bus drivers, the bus driver doesn’t want to pull up in there, well we might have a problem. So I try to make it easier for the bus drivers and the crew, and think about the long haul more than anything. So I think we got a good spot to deal with all that drama.”

On a sad note, one of country music’s famous dogs and the pride of Hank3’s household has passed away. His beloved hunting dog Trooper is no more. Alamo Jones asked Hank3 if he had any plans to get a new tattoo, and Hank told him he planned one in tribute to Trooper.

“Man I only get a new tattoo when things are really really bad. And I gotta get one here soon to commemorate old Trooper, so that’s probably going to be my next one when I’m ready. I always go up near Ft. Campbell and do it up around there. I got his paw print. I dipped his paw in ink and let him walk around on paper, so The Trooper will be walking with me the rest of my life … He was great. He’s been on the bus, been on the road, been in the studio. He held it all down … He was half black and tan, half doberman. I found him at Sonic in Poplarville, Mississippi driving back from New Orleans. We had some good times. I said we did it all.”

Hank3 is also known for helping to rescue dogs and help fundraise for stray adoption organizations in middle Tennessee.

“I’ve [still] got two official old school [dogs] that are mine, Mama and Royal. And then I got two rescues I found over in White’s Creek area. So I got a Catahoula hound I’ve been working with, and a small kind of pit [bull] I found off of Briley Parkway. Those are keeping me on my toes for now.”