Why God & Gospel Are Re-Emerging in American Music 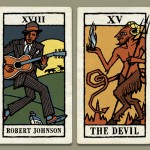 From the tale of blues godfather Robert Johnson selling his soul to the devil at the crossroads, to The Louvin Brothers’ singing about how “Satan Is Real”, to Hank Williams III screaming the dark lord’s name out in “Hellbilly” country, Satan, or the devil is the most recurring folk character American roots music has ever seen.

You would think in a country founded by puritans, whose percentage of population identifying itself as “religious” in a traditional manner hovers around 70%, God and Jesus would also be big players in popular music. But due to the secularization of American culture, God and Jesus have been mostly segregated into gospel and contemporary Christian music world. Mention the devil all you want in songs, in either a negative or positive context. But talk of God, or especially Jesus in a song typecasts it as “religious” content and limits the audience. Or at least that’s how it used to be. 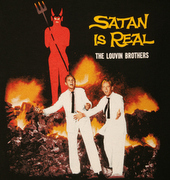 The Country Music Hall of Fame duo The Louvin Brothers for example started out as a gospel act, but to appeal to a wider audience made the move to secular music, so the could “sell tobacco” as Charlie Louvin said. Hank Williams developed the “Luke The Drifter” persona to sing his gospel songs under, afraid gospel would hurt the standing of the Hank Williams name with disc jockeys and the commercial crowd. Even in the 1950’s, religious music was a hard sell to the masses.

One of the reasons the devil makes such a good folk character or icon in music is because the term “devil” itself has become secularized. The devil is not always a religious figure, though it can be, it can also be simply a personification of evil.

Slowly over the past few years we’re seeing the re-emergence of both God and Jesus in roots music content, and the popularization of gospel. Why? Possibly for the same reason the devil works so well, because God and Jesus are beginning to re-emerge as “folk” characters too, that even non-religious people can identify with as personifications of good. This has taken some of the polarizing edge off of these religious terms, and opened them up as useful tools to songwriters.

From mainstream country and R&B where God is now more regularly referenced than ever before, to underground roots where it’s re-emerged after years of overuse of the “devil” and “Satan” terms, Jesus, God, and gospel are hot right now. You can see this everywhere. Shooter Jennings’ new album has a cross prominently displayed on the front. Ray Wylie Hubbard’s new album “Grifter’s Hymnal” has religious connotations throughout, and culminates in a Gospel song called “Ask God”. McDougall, a folk musician from the Northwest has a new album out early next week called A Few Towns More with a song “When God Dips His Love In My Heart”. Eric Church’s has a song called “Country Music Jesus” (possibly about yours truly), and the “Jesus, take the wheel” theme is very popular in popular country music at the moment.

Examples of Jesus, God, gospel music and elements of gospel being used in traditionally-secular music by believers and non-believers alike are everywhere. Why is this? Here’s a few ideas.

The Power of Gospel

With the renewed interest in roots music, more artists and fans are understanding what an important role gospel played in the formation of country, bluegrass, folk, and other roots art forms, how the use of harmony from gospel is an essential sonic element to American music, and how gospel can be an uplifting and enjoyable component to add to both recorded and live performance.

Beginning in the middle of the last decade and trending upwards from there, the use of the devil and Satan in lyrical content became hyper popularized, to the point now where the trend is beginning to reach parody and burnout. However the battle between good and evil is such an eternal theme in music, new ways must be found to communicate the good/evil struggle. The nature between God and Satan is such that the terms can almost be interchangeable in certain contexts, where you can take a negative song about Satan, turn it into a positive song about God, yet the underlying theme of the song never changes. This gives artists the ability to still say what they want to say, but not use Satan, whose name as a lyrical element may be becoming outmoded.

As with nearly all elements of American culture today, people could be using God and Jesus and religious symbols and language to be ironic instead of literal. It’s funny to sing a song about Jesus in a band that is otherwise secular or even counter to religious or Christian beliefs. However that could have unintended ramifications and alter meanings depending on the audience. A religious person could still listen to these songs and identify with the message, and it could also desensitize an audience to the use of such religious terms that for years were kept at arms length for fear of religious typecasting.

And God and Jesus just might be cool right now. Just like pink is the new black, Jesus could be the new devil. The trend may be towards these benevolent religious figures as hip terms. 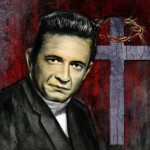 The imagery, songs, and legacy of Johnny Cash which is laden heavily with his religious beliefs may be one of the primary reasons God, gospel, Jesus, crosses, and other religious elements are trending up in roots music. Cash’s continued popularity even nearly a decade after his death, and his cross-genre, ageless appeal makes him a great ambassador for re-integrating religious content back into American music. Remember, Johnny Cash isn’t just a Country Music Hall of Fame inductee, he’s also in the Rock n’ Roll Hall of Fame, and the Gospel Music Hall of Fame.

Whatever the reasons, religious content is re-emerging in American roots music, and it’s hard to not get excited, whatever your religious beliefs are, to see what artists do when a whole new set of terms, themes, and modes is added to their creative palette.