Willie Nelson and Van Morrison Collaborating Together In Studio 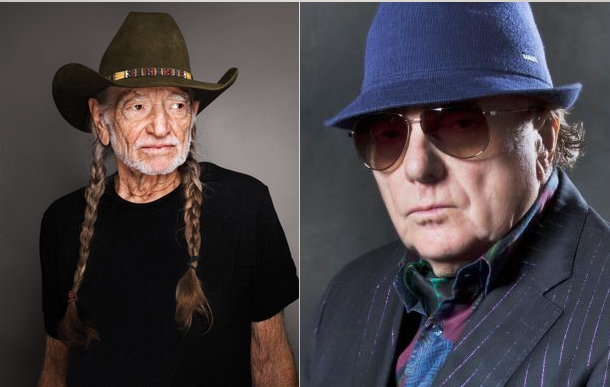 It’s very early in the process, and we don’t know if it’s just a few songs or an entire album. But the word out of Pittsburgh, PA is that Irish singing/songwriting legend Van Morrison and country music icon Willie Nelson were recently in the studio together collaborating on an upcoming project. The two were in town as part of a recent stop of Willie Nelson’s Outlaw Fest, and decided to duck into a studio for three days to lay down something fans of both artists will be eager to hear.

The Church Recording Studio in the Overbrook neighborhood in Pittsburgh received a phone call from Belfast, Ireland in early September, wanting to book the studio. “We didn’t take it too seriously at first, but after pushing them for some details, they revealed it was for Van Morrison,” the studio producer Dave Hidek tells the Pittsburgh Post-Gazette. “We actually believed them less at that point, so we asked for the standard deposit, and sure enough a check arrived the next day and we knew they were for real.”

Then a little bit later, they received a second unexpected call. “We got a call from Willie Nelson’s management to let us know that he’d be attending as well, which was an unbelievable thought, having those two guys collaborating in our space. Having either one walk through our doors would in itself be a treat, to put it lightly, but both of them together would certainly be a historic experience.”

The two legends played the KeyBank Pavilion on September 9th as part of the traveling Outlaw Fest. It was Van Morrison’s first appearance in Pittsburgh since 1973. Also on site for the recording session were Willie Nelson producer Buddy Cannon, Willie’s son and performer Lukas Nelson, and harmonica player Mickey Raphael, though the project was described as a “future Van Morrison project” as opposed to either a Willie record Van Morrison is guesting on, or some joint project. But we’ll have to see what the future holds, as fans of the two legends salivate over the possibilities.