We’re plenty well satiated on new music from Willie Nelson after the release of his latest album God’s Problem Child in May. In fact it might be one of Willie’s best recordings in many years, and certainly one of the better selections since signing with Sony’s Legacy imprint some years back. But there’s no rest for the wicked, and no rest for the Willie as the restless 84-year-old is planning to release a new album called Willie Nelson and the Boys on October 20th, which will be the second installment of Willie recordings released under the Willie’s Stash imprint.

Though the Willie’s Stash series was set up to release more archival-style studio material that didn’t make other more proper releases, Willie and the Boys is special for a number of reasons. First, it features his two sons from his most recently marriage, Lukas and Micah, joining their father on the recordings. The second is that the release focuses in on the Hank legacy of country music, mostly of Hank Williams, but not just stopping there.

If you’ve seen Willie Nelson in recent years, you know he dedicates an entire portion of his live show to playing many of the hits of Hank Williams in either full renditions or medley style. Now fans will have studio recording versions of songs such as “Mind You Own Business,” “Cold, Cold Heart,” and “Mansion on the Hill” from Willie. But it doesn’t stop there. On Willie and the Boys, Nelson also covers Hank Locklin’s “Send Me The Pillow You Dream On,” Hank Cochran’s “Can I Sleep In Your Arms,” and Hank Snow’s “I’m Movin’ On.” There’s a lot of Hank’s in country music, and Willie hits nearly all of them in this new record.

Buddy Cannon was the producer of Willie and the Boys, and it was recorded by Steve Chadie at Pedernales Recordings Studio in Austin, Texas. It will be Nelson’s 10th release on Legacy, and despite the idea that old folks don’t sell anymore, Willie’s God’s Problem Child went #1 on the Country Albums Chart, and he’s now sold over a million records as part of his Sony Legacy deal. 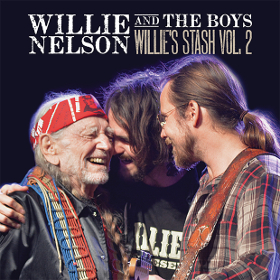