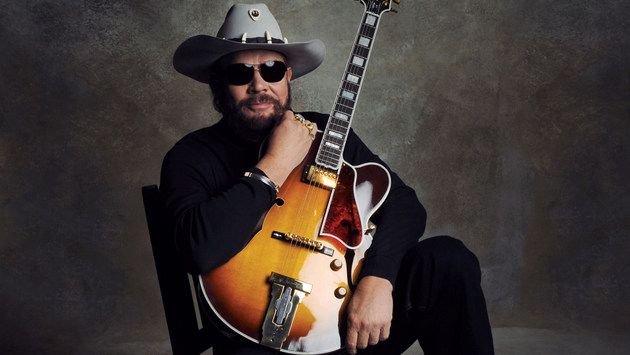 Hank Williams Jr.’s politics and boisterous attitude will always make him one of the most polarizing figures in country music history. But those who are quick to overlook his musical contributions both on and off the stage, the amazing body of work he’s amassed over his legendary career, and the mark he’s made on country music are doing Bocephus and themselves a huge disservice.

As he once famously sang about his father, let’s not talk about the habits, just the music and the man.

1. Breaking Away From His Mother Audrey to Be His Own Man 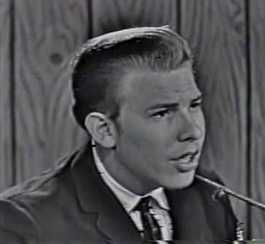 Hank Williams died when Hank Jr. was only four-years-old, and his mother Audrey immediately put Bocephus on the path to filling the void his famous father left behind, including playing Hank songs while backed up by his father’s famous Drifting Cowboy band for as many as 200 nights per year.

By the time Hank Jr. was 14-years-old, he began touring regularly with Audrey’s “Caravan of Stars.” By the time he was 17, he was already married for the first time. And by 1966 the younger Hank had signed a recording contract with MGM. They were expecting to get the new version of the old Hank, and that’s what they received. But buried deep inside Hank Williams Jr. was the yearning to break away from his mother’s control, find his own voice, and become a star through his own efforts.

And break away he did. Eventually Hank Jr. moved away from Nashville to his father’s home state of Alabama, and severed ties with his mother. From February through July of 1975, he recorded the album Hank Williams Jr., and Friends for MGM that included many of his own self-penned compositions, and collaborations with Southern rock icons Charlie Daniels and Toy Caldwell. It was the moment Hank Jr. broke free from the preconceptions of who he should be as a musician, and began to forge his own path.

2. Being More of a Multi-Instrumentalist Than He Ever Gets Credit For

Most folks think of Bocephus as the boisterous singer of the Monday Night Football theme and a few other rowdy songs, but have no idea he’s one of the most skilled instrumentalists that is also a performer in this history of country music. He may not have the licks of Jerry Reed mind you, but Hank Jr. is an excellent lead guitar player, whether on an electric or acoustic instrument.

And that’s just where his skills begin. Hank Williams Jr. is proficient on fiddle, banjo, dobro, piano (& other keys), bass (electric and upright), harmonica, and even drums.

3. Falling 500 Feet from Ajax Mountain & Landing On His Face

On August 8th, 1975,  Hank Jr. took a retreat to Montana and went climbing on a mountain called Ajax Peak. At about a 9,000-foot elevation, Hank Jr. slipped on a snow field covering the side of the mountain, and fell 500 feet. During the fall, Hank Jr.’s head impacted on several rocks jutting out from the snow field, and then he landed face first on a boulder. 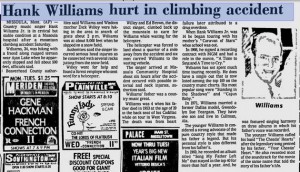 When help arrived, they found the front of Hank Jr.’s head was split and fractured from his chin to his hairline. As one observer put it, it was like he had been struck dead center in the face with an ax. Hank eventually lost all of his teeth, his gums were virtually gone, his right eye was hanging out of its socket, and parts of his brain were exposed through his skull. “My head was the size of a watermelon,” Hank recalls.

Since the location of Hank’s fall was so remote, it took many hours to rescue him as he laid on the side of the mountain, clinging to life. A helicopter was radioed in, but since the location Hank Jr. was in was so remote, six men had to carry him a 1/4 mile to where the helicopter could land. Six hours after the initial fall occurred, Hank Jr. finally arrived at the Missoula Community Hospital to receive treatment.

Over the next two years, Hank Williams Jr. would have nine reconstructive surgeries on his face and head. Doctors told him initially he would never sing again.

4. Being One of the Most Prolific and Successful Artists During His Peak Era

The numbers on Hank Williams Jr. during his biggest era from the late 70’s to the early 90’s are ridiculous, both in how prolific he was, and how successful those albums and singles were. Get this:

” Between 1979 and 1992, Bocephus released 21 albums. That’s basically an album every eight months. And every single one of them was at least certified gold.

” In 1982 alone, he had nine albums all on the Billboard Top Country Albums Chart simultaneously.

5. Always Working to Keep His Father’s Legacy Alive Through Music

Though Bocephus broke away from his mother Audrey to become his own man, he never strayed too far from the songs of his father, regularly re-recording Hank Sr.’s old classics, or mentioning his father and his contributions in country music wherever he could. From new renditions of “Move it On Over” and “Kaw-Liga,” to songs like “Living Proof” and “Family Tradition,” Hank Jr. always made sure the world never forgot his father.

6. Recording “The Conversation” with Waylon Jennings

“Hank Jr. is one of the best blues singers in the world, and on a good night, he can make his daddy look like a sharecropper. He’s his own man, and I think I helped him come to terms with that. In 1978, we turned on the microphones and recorded ‘The Conversation’—‘We won’t talk about the habits / Just the music and the man’—which helped us both take a fond look back at the Hank Sr. who rode that thin line between ‘crazy’ and ‘a saint,’ making him still ‘the most wanted outlaw in the land.’

“When we got through, it said things about his daddy he had never thought about, especially concerning the relationship between his mom and dad. They loved each other too much, Hank Sr. and Miss Audrey, and basically destroyed each other completely; but there ain’t a damn thing Hank could have done to change it.”

7. Re-Recording “Tear In My Beer” With His Father

Now I know what you’re thinking: What’s so big about overdubbing some vocals on an old song and re-releasing it? But “Tear In My Beer” was not only technologically groundbreaking at the time, but in the words of Hank Jr. himself, “It was the most special thing I ever did.” Using video merging technology, videographers were able make it look like Bocephus was right there playing with his daddy on stage, and both the video and song became huge commercial and critical successes. It was named Video of the Year by both the CMA’s and ACM’s, won a Grammy for Best Country Vocal Collaboration, and also put Bocephus over the top to win his third CMA Entertainer of the Year Award.

If you want to know just how special the collaboration was to Hank, watch him get choked up in his 1989 ACM Entertainer of the Year acceptance speech.

8. Facing Down Accusations of Racism, and Paying Tribute To Tee Tot

Many take it as a given that Hank Williams Jr. is a raging racist. In March of 2006 when his two daughters Holly and Hilary were seriously injured in an auto accident, a rumor was being spread about how Hank Jr.’s racism had made him cantankerous to some of the African Americana hospital staff. In a press conference, the staff of the hospital flatly denied the accusations, and when it was Hank Jr.’s chance to speak, his response was, “If it wasn’t for a black man named Rufus Payne, I wouldn’t even be here.”

The black bluesman from Montgomery, AL nicknamed “Tee Tot” is the one who taught Hank Williams how to play guitar and what the blues were all about. In tribute, Hank Williams wrote and recorded the “Tee Tot Song” on his 2002 album The Almeria Club Recordings.

9. Telling Off Mike Curb on His Way Out The Door

Hank Williams Jr. virtually built Curb Records in the label’s early days in the late 70’s and early 80’s. When Mike Curb started the Nashville-based label, he and Hank Jr. were close friends, and together they took Nashville by storm as one of Music Row’s only independently-owned outfits. But as Curb slowly morphed into one of the most heavy-handed and unjust record labels in all of music during the 00’s, Hank Jr. had some choice words on his way out the door.

“You want to know the bottom line? This is my last album, and [Mike Curb’s] history,” Hank Jr. said in July of 2009 around the release of his album 127 Rose Ave. “We will move onward and upward, You just wait. We’ll have a lot to talk about. I’ve had some recording ideas that they didn’t care for. Well, there’s a lot of other labels that do care about it. We’re going to get off this old, dead sinking ship.”

(Hank Jr. has since settled with Scott Borchetta’s NASH Icon.)

10. Siring a Third Generation of the Hank Williams Legacy

11. BONUS: Recording Songs Like “All My Rowdy Friends Are Coming Over Tonight,” “Country Boy Can Survive,” “Whiskey Bent and Hell Bound.”

. . . and many more that have become standards in the American songbook.