2012 was a bumper crop year for great albums in the greater country music world, and that necessitates a bolstered lineup of candidates for Saving Country Music’s coveted Album of the Year.

7 total made the list, with others admittedly getting completely screwed by their absence. Rachel Brooke’s A Killer’s Dream isn’t officially out until tomorrow, but trust me, it is epic, and still couldn’t make the list. It’s ridiculous that both Ray Wylie Hubbard’s Grifter’s Hymnal and Justin Townes Earle’s Nothing’s Gonna Change The Way You Feel About Me Now aren’t on here, but they will both show up very prominently in the Song of the Year list.

Lee Bains & The Glory Fires There’s A Bomb In Gillead and the Calamity Cubes’ Old World’s Ocean are other excellent offerings that on a lesser year for music may have won the award outright. But this year, competition is stiff, and you really had to shoot the moon to make the list. Another that probably should be considered, but I must recuse myself from considering because I was part of the production team is James Hand’s Mighty Lonesome Man. (Look for these and other album on SCM’s upcoming “Essential Albums” list.)

I already have a bead of sweat forming across my brow brought on by the impossible decision of who I’m supposed to pick off this list. As always, audience participation is very encouraged, including write-in candidates. Vote down in the comments section and I do take feedback into consideration for the final decision, especially if people tell me why it is the best candidate, instead of simply following a Facebook link and typing a name. 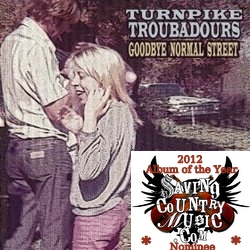 To be the Saving Country Music Album of the Year, you can’t just be good, or even great. You have to bring some intangibles to the table. You have to make an important impact on the greater music world. The way Goodbye Normal Street accomplishes this requirement is by its ability to branch out and create new fans for independent music. Find the most diehard pop country fan and play “Good Lord Lorrie” for them and watch them wither and want their own copy. It’s substance with accessibility, and that is a powerful, powerful weapon for real music.

“Call it a maturing or a coming into their own, but this album marks the most solid offering from this Oklahoma-based band yet, and a defining of their sound, their place in the music world, and as a band that music world should pay more serious attention to. Sharp wit, self-reflection, specific references to characters and situations in an almost Townes or Robert Earl Keen-like storytelling approach imbibes this music with a freshness and engaging nature, revitalizing the old-fashioned love and heartbreak songs in the modern, independent context.” (read full review) 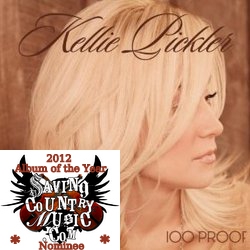 The founding, underlying principle of Saving Country Music is the fight for creative freedom for artists. In 2012, no other album and no other artist defines that fight more than Kellie Pickler. Sacrificing her major label deal and a big payday to make the album she wanted, Kellie put out a strikingly traditional and engaging album that Chet Flippo, the same writer that covered the Outlaw country music scene back in the 70’s for Rolling Stone, called “the best pure country album in recent years.” But if 100 Proof wins, it won’t just be because of what the album symbolizes or its critical acclaim. It will be because it’s just so damn fun to listen to.

“If you are truly a fan of country music and have an open heart, you will like 100 Proof. In the Tammy Wynette, Loretta Lynn mold, 100 Proof revives the lost appreciation for the strong, yet sweet country woman, while staying away from the surface symbolism that erodes the substance from many of the other artists that attempt this difficult feat.” (read full review) 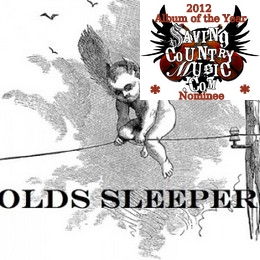 I swear, Olds Sleeper is the Tom Waits, Beck, and Townes Van Zandt of our generation all wrapped into one…while at the same time being some random dude with a straight job churning out songs in a spare bedroom, playing all the parts and recording the music himself. Someone putting out so much music in a year, and doing so in such a lo-fi context isn’t supposed to be this good. Olds Sleeper will churn out 3 or 4 albums, and 40-something songs a year under various pseudonyms. The songwriting is par-excellence, tearing at your heart, reducing grown ass men to tears at times. And at other times New Years Poem is a straight up headbanger. Be prepared for how dirty and under-produced this project is, but that’s all part of the fun. New Year’s Poem is breathtaking, Old’s magum opus up to this point. Oh, and it’s FREE.

“Old’s New Year’s Poem opens up a new chapter in his music, and name’s his most complete album yet. There’s a great balance between his balls-out fuzz jams and heart-straining ballads, and a good flow from stem to stern.” (read full review) 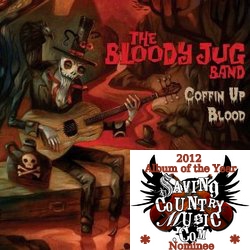 If I was picking the winner exclusively on creativity and originality, this album would win it running away. Coffin Up Blood gives you hope for music. It proves that there’s still new ways of making old music, and still uncharted territory yet to discover. At the same time it is one of the most purely entertaining albums of 2012. On the outside it may look like some horror gimmick, but this was an album that lots of time and love went into and was done right from start to finish.

“Forget the heavily death-infused concept, what The Bloody Jug Band has accomplished is releasing one of the most creatively-spellbinding albums in recent memory. Its funny. Its dark. It never takes itself too seriously. It is as engaging as any album I have listened to in years. You can’t stop listening to it, and when you’re not listening to it, you crave it. Think it’s all been done in roots music? Listen to Coffin Up Blood and prove your ass wrong.” (read full review) 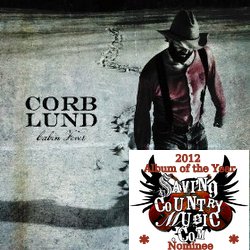 Like the cowboy poets of old, Corb Lund is a master craftsman with the pen, knowing how to balance humor and heartbreak, irony and perspective to perfection. This album is angry, bordering on insane at times, but never loses its poetic, top-shelf aptitude with words. From a songwriting perspective, it’s 2012’s best while boasting some real fun music ranging from rock & roll to Western Swing.

“The United States is not the only land with lonesome cowboys and wide open spaces. Corb Lund grew up on his family’s farm and ranch in Alberta (the Canadian province, not your smelly aunt with 6 cats), and his rural cowboy life and thirst for country comes through in his music. There’s no corny hoser-ism here, Corb Lund is rich with ribald and wit, with forays into rock & roll and wild diversions of the mind from a man struggling to relate to modern society.” (read full review) 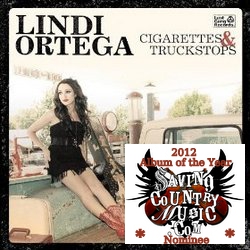 That’s right ladies & gentlemen, two Canadians are candidates for Saving Country Music’s Album of the Year. Lindi lands on the list for putting out the most tasteful, most stylistically-flawless album over the past 12 months, and one that has something for everyone. Lindi Ortega will be a big force in American country and roots music in the coming years. Mark my words.

“‘Cigarettes & Truckstops’ is a succulent endeavor into the very fabric of country music, dusting off country’s roots, adding a little rockabilly, and re-emerging with them in a sexy and relevant candor, talking care free about drugs and danger, and not doing anything to be cool but being herself. Lindi Ortega doesn’t need to paint flames on her chest, she’s hot enough. I certainly can see how folks from a very wide swath of the roots world could get into her music. From the underground to Americana, if you don’t like her music, you’re not listening to it right.” (read full review) 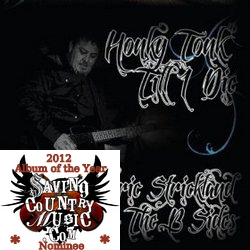 If you’ve made to the bottom of the list here and were wondering where in the hell the music from just a simple Southern country boy belting out bad ass country songs with no strings attached was, well meet Eric Strickland. Straight laced as it may be, this album is still something special simply from the strength of the songs and the performances.

“This is what Saving Country Music is all about. This is the reason I put my pants on every morning. Everything else is just fluff, filibustering, treading water until I come across that one artist, that one album that embodies everything true country fans are looking for but have yet to find. That is what you have with Eric Strickland and his band The B Sides, and their album ‘Honky Tonk Till I Die.'” (read full review)