These are never easy decisions to make, and it’s at about this time every year when I wonder why I pressure myself into making them. This year’s crop of nominees for Song of the Year seemed especially strong; songs that will go on to be marquee songs in each of the nominee’s legacies.

If I were to base the winner simply on importance, it would have gone to Kacey Musgraves’ “Merry Go Round” that stubbornly refuses to leave the mainstream country music charts despite its progressive message. If I based it on being the best pure country song, it would have gone to Eric Strickland’s “Drinking Whiskey.” If I based it on the song I personally liked the most, it would have been Olds Sleeper’s “Bigsky/Flatland.” Tom Vandenavond’s “Wreck of a Fine Man” probably told the best story, and “Good Lord, Lorrie” made The Turnpike Troubadours a legitimate, full-time band that has made it. And the only way I can not justify giving the award outright to Sturgill Simpson is because “Life Ain’t Fair & The World Is Mean” will likely appear on a new album next year, allowing it to be considered again. 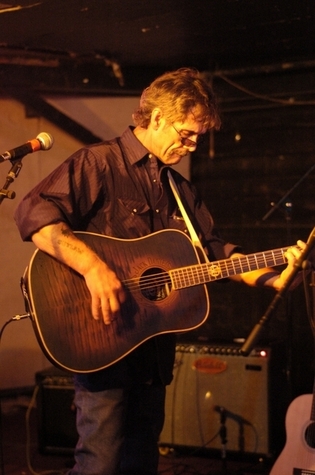 All these songs were so equally matched, I chose to let the commenters help decide this one significantly, and that is the first reason the award is going to Billy Don Burns, and his masterpiece “Stranger.” The second reason is since all of these songs are so well-written, it would have been impossible to order them by this attribute alone so I had to start looking at other factors. Where “Stranger” rose above the competition was in the production of the song, and the performance by Billy Don Burns.

“Production” is considered a bad word to some in music, and what’s funny about the production of “Stranger” is that it’s almost outmoded in its approach. It’s certainly not modern, but it’s really not classic either. It works in these strange, late 80’s, early 90’s textures, with lots of space, color, and warmth. It evokes the epicness of anthemic songs from that period like Willie Nelson’s “Pancho & Lefty” or The Highwaymen’s “Highwayman” that a short while ago may have felt hokey, but now harkens back to the last era when you could still hear the overlords of the genre come through your radio. The production is both heavy handed and astonishingly lacking and laid back at the same time. Serious accolades are due Aaron David Rodgers who produced “Stranger” and the parent album Night’s When I’m Sober.

Billy Don Burns is a writer first, but he sings the hell out of this song by structuring it around his vocal strengths. Instead of appreciating his voice for conventional notions of beauty, you appreciate it for its raspy, strained, and torn nature. Instead of singing louder or harder when Billy Don wants to create emphasis in “Stranger,” he counter-intuitively sings softer, or even talks, with the quieter he gets, the more you listen, and the greater impact the words have. Parallel to the story “Stranger” coveys, the song doesn’t rise like most, it falls. In moments Billy barely eeks the words out of his rusted pipes like they are the words of a dying breath, marrying the depth of meaning and story behind the expressions to the sounds he makes, while the music bends and sometimes drops out entirely to compliment the experience of listening to a story that is both tragic in nature, and hauntingly universal.

This song is about losing yourself, which we’ve all done, and will all do again, and how we all start off life with a firm grasp on who we are that life does its level best to wrestle away from us. But inside “Stranger” there is also a glimmer of hope in how the realization of one’s self can stimulate renewal. And above all of that, the beauty of “Stranger” is its fierce simplicity–the attribute of all excellent country songs.

Billy Don Burns seems like one of these artists whose opportunity for a serious, lucrative career in music is unjustly fleeting, but his chance at a long-term legacy in music seems all but inevitable from all of the songs he written, the albums he’s produced, and all the friends he has made over the years. For a long time folks had been trying to get my attention about Billy Don, and the timing apparently just wasn’t right. Whitey Morgan once told me he would never put out an album without a Billy Don song on it. Brigitte London told me he was one of the best songwriter she’d ever met. I poked around and found he’d written songs for Willie Nelson, and produced albums from Merle Haggard and Johnny Paycheck.

But what Billy Don needed was a new album to breathe new life into his musical quest; to bring a new generation of ears to his music. And on the year of the release of this song and his album Nights When I’m Sober through Rusty Knuckles Records, it would have been a desecration of the Saving Country Music seal to not use the opportunity to shine however puny of a spotlight this website wields on what in my opinion might be the artist who is suffering from the greatest discrepancy between remarkable accomplishment and paltry recognition in country music.

Billy Don Burns’ song “Stranger” proves why it is such a travesty that his name and legacy are such strangers to the modern country ear. It’s imperative on all of us to fix that.

Learn how to get your song on itunes at ReverbNation.com
0