Trigger Down with Pop Country 101 Comments

This year in popular country music, there were some glimmers of hope. Kacey Musgraves’ “Merry Go ‘Round” found some surprising traction and success, and Kellie Pickler’s 100 Proof may go down as one of the best mainstream country albums in years. But of course this was all counter-balanced by a gaggle of the worst songs “country” music has ever seen. At this point we probably should just resign that each year the crop of bad songs will get worse as Music Row runs out of ideas and continues to appeal to the least common denominator and stretch for relevancy.

Something else to note about this year’s crop of “Worst Songs” is half of them, including the top three, are the responsibility of The Country Music Anti-Christ Scott Borchetta’s Big Machine Label and it’s associated tentacles. Songs were picked through a proprietary algorithm that considers not just how awful a song is or sounds, but that also takes into consideration cultural significance. 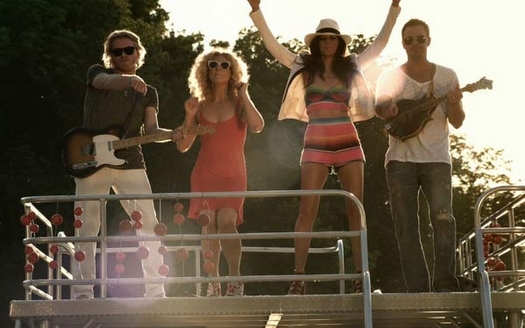 Little Big Town does its level best to shipwreck country music by jettisoning off any and all country roots and twang and inviting on board the most unabashed pop culture imagery and materialism in this stupid summer lake song. The only time a pontoon like this should make an appearance in country is when a bass boat is trolling by and its redneck occupants drop trow and moon these martini-sipping elitists. The eardrum-raping “tings” that make up the idiotic hook for this song sound like the noise that Satan would evoke when perpetually pulling out your pubic hairs one by one as the punishment for eternal damnation.

I hear mention of “motorboating” but unfortunately none of the sea hags in Little Big Town are endowed fully enough to pull the trick off. No, it’s not the choppy water, it’s this song that is making me want to blow chunks overboard. 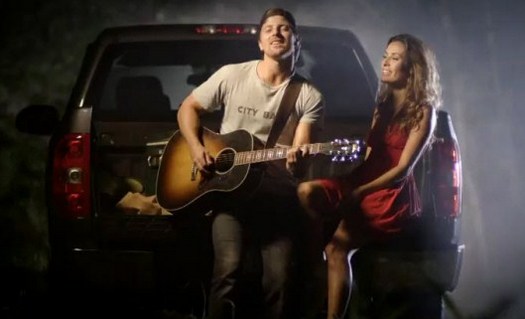 You know your song is lame and unimaginative when Mother Goose is suing you for royalties and mechanicals. There’s something about a truck? There’s something about some pop country douche in a backwards baseball cap ripping off the nursery rhyme “Hole in the Bottom of the Sea” accompanied by Richie Sambora-style stratocaster guitar that makes me want to insert a corkscrew into my earhole and start turning.

Apparently this song is about getting laid by some shallow chick. “On one occasion, [my car] broke down, so I asked my dad, ‘Pop, I need your truck.’ He said sure, so I took it to pick her up ”¦ It was like I picked up a whole other human. She was vibrant and all about me; she was all over me from the beginning of the date.” 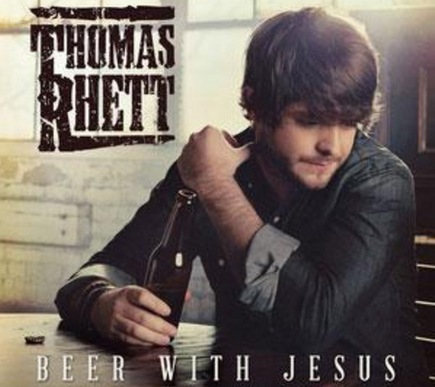 Jesus may have turned the other cheek, but he also overturned the tables of the money changers in the temple where they didn’t belong. Just like the Romans of biblical times, these pop country fart tards are foreign occupiers who need to get the hell out of country. I don’t pretend to know what Jesus would do, but if I were him, I’d shove my sandal straight up Thomas Rhett’s ass and tell him he could keep his Michelob Ultra. Somewhere in the Bible it must say that the worst lies are the ones you tell yourself, and if Thomas Rhett thinks this song is anything other than marketing, he’s committing a cardinal sin. 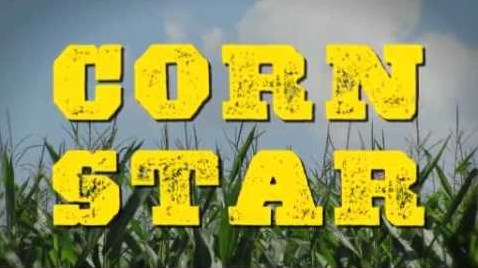 I’d rather have to clean up the corn-laced leavings of a sumo wrestler or have my poop shoot violated by a serrated corn cob than subject my ear holes to this abomination.

If you think “Corn Star” is funny, then the joke’s on you.

Shooter takes the ‘O’ out of country and pulls a Benedict Arnold by teaming up with pop country also-ran Bucky Covington (aka “The Nickeback of Country Music”) in this positively awful pop song. Shooter has his Kool-Aid-drinking apologists selling out every one of their principles to defend their country music savior while he ca$hes in by the elevation of his cult of personality.

How pop is this video and song? Well it got over 2 million hits in 72 hours, but if you check out the like to dislike ratio on this video, it is phenomenal. This song has a double digit lead on the like to dislike ratio on all the other songs on this list, on the worst country songs of all time, or virtually any song released in popular music, only outpaced by Rebecca Blacks of the world. You could make a serious case that this song is the most polarizing ever released in country music.

Oh and let’s not forget they changed the “Outlaw” lyric in the song so Shooter wouldn’t look like a hypocrite since he called out this practice in his song “Outlaw You.” But all of that’s okay, because he played my band’s song on his satellite radio show on Sunday afternoon at a time slot they give to pseudo celebrities because barely anybody listens. Or he smoked me out backstage one night, or took me out for a drink and said he loved my blog.

I’m just glad I’m on record calling Shooter the Svengali of country music before this song and video were released. As Jules in Pulp Fiction once said, “If you want to play blind man, go walk with the shepherd. But me, my eyes are wide fucking open.” (read song review) 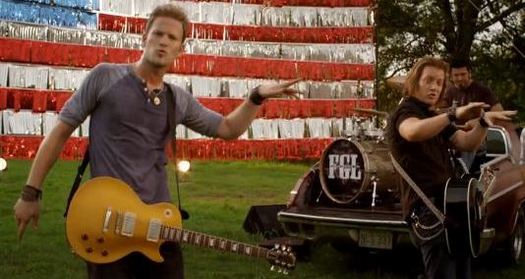 Yet another entry on this list originating from Scott Borchetta’s Big Machine Records, which is ironic seeing how these two douchebags met at Borchetta’s cross-town rival’s namesake–Belmont University’s “Mike Curb College of Music.”

Florida Georgia Line is a horrible combination of Rascal Flatts pretty boy hyper-pop, and designer jeans Jason Aldean “backroad” laundry list bullshit. They are everything bad about quotation mark “country” in 2012 combined into one big stuffed crotch sandwich. Punctuating how pathetic “Cruise” is, is the fact that these two dudes apparently don’t know how to use punctuation. The first line of the song goes, “Baby you a song,” instead of, “Baby you’re a song.” But what else can you expect when the title of their EP is It’z Just What We Do. Yes, it’s one of those albums, blurring the lines between Ebonics and idiocracy. (read song review)

2. Taylor Swift – “We Are Never Ever Getting Back Together” 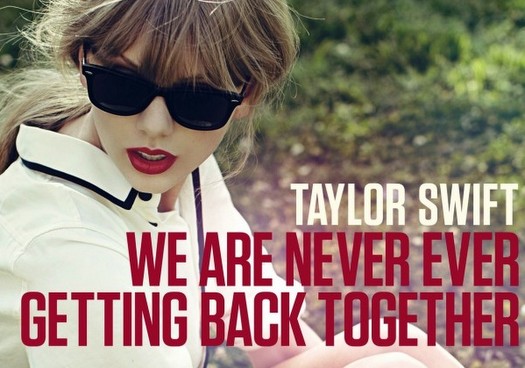 There’s positively nothing country about this song, which should really disqualify it from the competition. But because of Billboard’s new chart rules, “We Are Never Ever Getting Back Together” went from being #21 on the country charts and faltering, to being #1 for 9 straight weeks, breaking the record for a female country artist that had been held since 1964 by Hall of Famer Connie Smith. It spent 3 weeks at the #1 spot on Billboard’s all-encompassing “Hot 100” chart, the first country song to accomplish this feat since Kenny Rogers’ “Lady” released 33 years ago. It also set the record for the biggest digital sales week ever for a song by a female artist, and has now been certified triple platinum.

All of this is despite the fact that the song was only released to the public in a pop mix, with the “country” mix being the other version of the song, and only available to country radio upon request. I’ve got nothing funny to say here. I guess it is an okay pop song, but this song coupled with Billboard’s new chart rules caused possibly the biggest sonic and statistic erosion to the foundation of country music in its 70 year existence.

“Truck Yeah” picks up where Jason Aldean’s country/rap “Dirt Road Anthem” left off, blurring the lines between country and rap until you’re left with “crap.” With the first single from the Big Machine Records-era of Tim McGraw, the country music mega-star pulls off the biggest sellout move of his career, and one of the biggest sellout moves ever seen from an established country music franchise name. “Truck Yeah” is an embarrassing, overt outcry for relevancy and commercial acceptance. Somewhere Mike Curb–who McGraw won a court case against to release this song and join Big Machine–is sitting behind a desk, maniacally stroking a cat sitting on his lap and cackling.

There’s no story. Instead the song just spews out stereotypical artifacts of culture while hanging on one single monotone vocal note with minor variations. This song is a product of the mono-genre. It’s a club dance song. Countryisms and urbanisms are belted out by McGraw with no delineation between the two. He talks about crew cabs and clubs downtown. DJ’s and rednecks. And then there’s the line, “Got Lil’ Wayne Pumpin’ on my iPod.” And add on top of all of that the stupid cornpone title lyric and the fact that it’s yet another mainstream song about trucks and you have a super-fecta of pop country suckitude.

The worst country song ever? Quite possibly. It’s certainly the worst of 2012. (read song review)