Where other promising acts of independent country seem to almost invariably veer towards the rock or indie side of music as they make their career ascent, the Turnpike Troubadours have stuck to their country roots. If anything, they’ve added more twang to their sound by incorporating a sixth permanent member into the band recently in steel guitar player “Hammerin'” Hank Early. The Turnpike Troubadours are a band that won’t break your heart as a country fan. They won’t abandon you to follow some big trend, or attempt to set one for themselves. Like the rising and setting sun, the Turnpike Troubadours are steady. They are there for you, while remaining remarkably fresh and avoiding anything the feels even close to a stale routine.

Four or five major records in and cresting into their 30’s, a band is supposed to have either made it, or solidly ensconced themselves in whatever groove they will remain in for the rest of their careers. But in country and roots music, near history has proven to be different. In the ‘Age of the Song’ which we’re in the midst of, maturity is often rewarded. So is sobriety and stability, both things that Turnpike frontman Evan Felker—like Jason Isbell and Sturgill Simpson before him—has found at least a level of in the last couple of years. 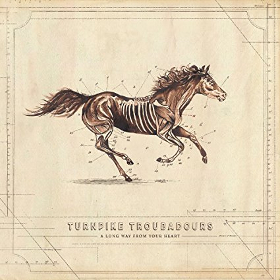 A new vitality marks the songs of A Long Way From Your Heart. Where their last record seemed to lean at times on the strength of Evan Felker’s songwriting, most of the selections from A Long Way From Your Heart are the full package. The song construction is smarter, the melodies fattier, the turns of phrases more witty, and the choruses rise under their own volition as they should in a country song, as opposed to the forced action of the popular music influence.

Though a high bar had already been set across a number of musical gradients from previous Turnpike projects, A Long Way From Your Heart feels more virile on multiple counts, bested only maybe by those first few songs from their first LP (“Every Girl” and “7&7”). The sound is full with the addition of steel guitar, and this gives guitarist Ryan Engleman and fiddler Kyle Nix the freedom to stretch their legs in segments. There’s a vitality seasoned from the influence of the famous Sonic Ranch in West Texas where the album was recorded. And the songwriting of Evan Felker and the other contributors is more spirited and refined, fueled by a full-bodied passion for the music, where perhaps previous energies were parsed somewhat on anxieties.

Sometimes a Turnpike Troubadours song leaves you with a riddle, like the opening track “The Housefire,” which reprises the role of Lorrie from previous Turnpike songs. Sometimes the point is a bit more obvious, like in the articulation of an impending storm in “Tornado Warning”—or perhaps it’s an allusion to something deeper. Is the final song “Sunday Morning Paper” about the death of fellow Oklahoma music star Leon Russell? He died on a Sunday, played piano, and if fits with the line “rock and roll is surely dead.” Other lines seem to hint of Merle Haggard. Or is it both? Or are we completely off the scent? Sometimes you don’t even want to know where a Turnpike song is taking you, or the answer depends on who you ask.

“The Winding Stair Mountain Blues”—though perhaps the most energetic Troubadours track yet—and a necessary scorcher to imbue the album with spice—felt a little to close to the approach of their previous song “Before The Devil Knows We’re Dead.” But this is about the only flimsy criticism a fine tooth comb exposes in this record. A Long Way From Your Heart is also balanced out by new sounds from the band in songs like “Something To Hold On To,” which has almost a mid 80’s warmified style not indicative of traditional Turnpike tunes, but timely and perfectly textured to keep the Turnpike sound fresh. “The Hard Way” and “Unrung” anchor the album with solid songwriting. And if you’re looking for that one selection that may go right beside “7&7” and “Good Lord Lorrie” as a song that will put Turnpike in the canon of country music history (and make your girlfriend or wife swoon), “Pay No Rent” might be the guilty party.

The problem that remains with the Turnpike Troubadours has nothing to do with their own efforts. It is confounding issue of why their music hasn’t risen to the household name recognition it seems to deserve. The press seems woefully unaware of the fan base they’ve amassed, and the effect of the music upon them. The written material accompanying the release of various songs ahead of this project was fairly lacking. Their Wikipedia page remains a thumbnail. And if you didn’t know any better, you would almost think someone is trying to keep the Turnpike Troubadours as Texas/Red Dirt’s best kept secret.

Part of the problem is the regional strategy that holds a lot of Texoma-based bands back. When you can pack out houses with four figure crowds across a few states, why slag it out in the extremities of the map for a few hundred hearty fans? But you have to open those markets; you have to put that service time in. The Turnpike Troubadours have tried to do that, including a recent trek to the U.K. and Europe. But it has to also be accompanied by someone telling your story. Even more than most, the Turnpike Troubadours are a narrative-based band. The music may be infectious, but for the the full-bodied experience, you must delve into the story of the songs, and of the band itself, and how they intertwine. While you see big write ups in major periodicals for other artists half as talented, Turnpike’s only talked about in the same old haunts.

Time has well past where the Turnpike Troubadours should graduate to the big leagues, where they should be mentioned right beside the other titans of independent country, and tickling the mainstream. Why couldn’t you play a Turnpike Troubadours song on mainstream radio? Their influence already is on that level. You hear the bones of Turnpike writing and song structures in a dozen bands in Texas and beyond, more so than you do so-called more successful artists. The Turnpike Troubadours are their own subgenre. It’s a sound that leans heavy on fiddle and substantive songwriting, and that peer influence has raised the quality of country music across the board in recent years.

Purchase A Long Way From Your Heart from the Turnpike Troubadours

Purchase A Long Way From Your Heart from Amazon