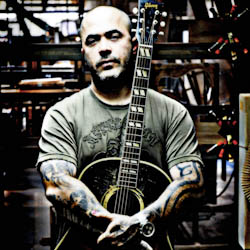 We’ve seen these moments more and more at concerts, especially country music concerts where an artist has to stop everything down because someone in the crowd is acting completely inappropriate, but this instance may take the cake. Recent country music convert Aaron Lewis was manning the mic as part of his other gig as the frontman for the angry emo rock band Staind during the last weekends Rockfest in Kansas City, when he stopped the concert down during the song “Something To Remind You” to twist off on guys copping a feel on a 15-year-old crowd surfer. While smoking a cigarette and sporting a shirt of Johnny Cash flipping the bird, the Staind frontman said:

Alright, listen up, you fucking assholes. That fucking girl right there is, like, 15 fucking years old and you fucking pieces of shit are molesting her while she’s on the fucking crowd. Your fucking mothers should be ashamed of themselves, you pieces of shit. You should all be fucking beaten down by everyone around you for being fucking pieces of shit. If I fucking see that shit again, I swear to God, I will point you out in the crowd and have everyone around you beat your fucking ass.

Apparently Lewis got his point across, because the concert proceeded without further incident.

Aaron’s outburst is reminiscent of other artists having to stop down concerts this year, mostly for fighting. Jason Isbell had to stop down as show in Madison, Wisconsin in February for fighting. Jake Owen came to the aid of a girl who was being hit by a man in Ft. Wayne. And Tim McGraw while in Wheatland, CA had to call out concertgoers for brawling.

Arron Lewis has proven himself to be protective of women before. In January he debuted an alternate version of Tyler Farr’s creepy stalking song “Redneck Crazy” written by Zach Woods. “I just always thought the message of this song was pretty fucked up,” he said about the original song. Lewis himself has three daughters, Zoe Jane, Nyla Rae and Indie Shay.