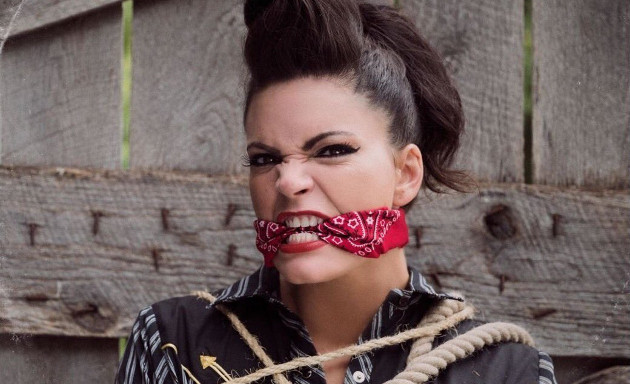 You would think being a principal of the quite successful Pistol Annies super group would have delivered clout and access to Angaleena Presley in spades, and help her launch a massive mainstream career. But no dice during this culturally-bereft era in popular country music. Just as an asterisk should probably be placed beside all the stats from the Bro-meisters as they rack up ridiculous numbers selling rap and EDM songs as country, so should the history books reflect the embarrassing dearth of true country talent that was developed by the industry during this era. Short of being 23 or younger and singing straight up pop songs, your prospects are slim to nil in making it in the mainstream circa 2017 if you’re saddled with the dreadful pairing of XX chromosomes.

Yet there’s a silver lining to these adversities, which is that swimming upstream in the independent music realm has never been such an inviting, and potentially rewarding choice, and if you have a little bit of a name behind you already like Presley does, that can give you a running start. This isn’t just about how Angaleena Presley wasn’t able to parley her Pistol Annies experience into something bigger. Maybe she could have early on if she was willing to contort herself into whatever shape the industry wanted. It’s not like Ashley Monroe is out there selling out arenas, even with a major label deal and baseball hubby. Sadly, there just is no lane for a woman in mainstream country in 2017 regardless of the background or circumstances.

Angaleena calls this her “F-you record,” and it is certainly that if nothing else. Close followers of the Pistol Annies and of Presley’s writing—including her debut record American Middle Class—know that the Annie with the darkest wings has always been Angaleena. It’s just now she’s able to spread them in full flight. 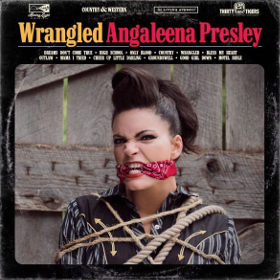 Uncaged, unhinged, and at times even inappropriate, Wrangled is Angaleena Presley making the record she wants to, be damned of the bridges left aflame and the apple carts upset. It is an unusual record, in both sound production and theme. But it also remains solidly country, Angaleena country, where no recess of the unsettled mind is off limits, and at times little psychotic voices like from demons perched on one’s shoulder get eerily uttered through bullhorn filters in the background.

What’s really at the heart of Wrangled is Angaleena unburdening her soul about her broken dreams from her experience in the music industry and beyond. “Dreams Don’t Come True,” written with her fellow Pistol Annies, sets the table for the record in how the average human experience is usually summated in dreaming big when you’re young, and settling when you’re old. A lot of the other songs touch straight on that theme such as “Mama I Tried,” and really every song of Wrangled is about the inherent injustice of life, and how those who hold tight to principles tend to find themselves saddled with adversity.

Though mostly written by Angaleena herself, there’s some great co-written contributions here too, including Chris Stapleton’s appearance on the creepy murder ballad “Only Blood” featuring Stapleton’s wife Morgane on the harmonies, the venerable Wanda Jackson with Vanessa Olivarez teaming up with Angaleena on the very true “Good Girl Down,” and possibly the most cherished piece of audio from the album, “Cheer Up Little Darling” co-written with Guy Clark, giving the record a token of positivity and wisdom about how to make it through trying times. The first song Angaleena ever learned was Merle Haggard’s “Mama Tried,” and though the remakes and offshoots of that song are plentiful, “Mama I Tried” might be the most entertaining tune on Wrangled, veering slightly toward the rock end of the spectrum like a few moments on the record.

Presley plays the perfect villain, and victim, but the album reaches its most telling moment on the song “Outlaw.” The dreams we forge in youth and hold on to throughout our lives never have us winning 2nd place, or settling into the second tier of a profession. They have us winning the top prize at center stage. Yet the simple fact is that so few people will ever have the opportunity to see those dreams fulfilled. For reaching the top to feel special, it requires that many others fail to get there. “Outlaw” is a term that some try to use to fool themselves into thinking they’re fine with being an outcast or part of the alternative, but nobody dreams of being almost famous, or the bad guy.

Ironically, some listeners from the independent/Outlaw country world will never give Angaleena or Wrangled an opportunity because they see her as part of the glamorous, mainstream set from her role with the Pistol Annies, while the rough edges of the music of Wrangled meant to give the mood to Angaleena’s frustrations and anger will be too much for the gentle ears of mainstream listeners to take.

Angaleena is in a strange space—part of the wildly-successful unknown, or the independent elite. And though this must be an incredibly frustrating position to be in—owning incredible success and colossal failures in her career—it made for ripe head space to compose an unusual, unique, and compelling album where much is said, and in a refreshingly candid manner.