Texas music performer and Lubbock native Dalton Domino is stuck between two worlds, and in more ways than one. On the one hand he’s a true songwriter who’s made much of his name behind the power of his pen and the delivery of powerful stories and emotions to intimate crowds. On the other hand there’s the sonic obligations placed upon many Texas country artists that if you want to compete with the big boys like Randy Rogers and Wade Bowen, you must flank yourself with lead guitar players and try to wow a crowd with the sheer power of country rock. It’s also a life where it’s your obligation as the entertainer to bring the party. But what if the party is what gets in the way of your life?

Previous eras and studio efforts by Dalton Domino were primarily about trying to strike that balance between penning songs that would make his peers and patrons appreciate him in a much deeper capacity than just simply a showman, yet include enough songs to populate his live shows with energetic and entertaining moments to make him a good booking for Friday night. Dalton Domino’s latest record and third overall called Songs From The Exile leaves whatever happens live to chance, and delves deeply and sometimes mercilessly into the throes of emotions and jagged memories we all wrestle with, but rarely with as much candidness and naked honesty as Domino has the courage to do here.

Dalton’s willingness to bear it all regardless of public judgement was evidenced earlier this year when he abruptly canceled his upcoming live appearances and entered treatment. At the same time the sobriety and metal state surrounding another high profile Texas/Red Dirt personality was a point of rampant speculation, Domino left nothing to rumor. In a slight reversal of the norm, Songs From The Exile was written and recorded right before a rehabilitation stint, not after. However, the 13 songs included on the Lightning Rod Records release speak to some, perhaps many of the underlying issues that led to the slip from self control. Some of the stories on Songs From The Exile you hope aren’t real, or are at least embellished under poetic license. But your sinking suspicion is that many probably are. Either way, “real” is exactly how they feel.

From numerous underlying familial issues and the death of loved ones, to odes of heartbreak and misfortune, Songs From The Exile is like a document dump from Dalton Domino’s suppressed memory cache of the highest order. Dalton isn’t just facing down the demons staring him down everyday, he’s on a quest to delve into the deepest recesses of his psyche to ferret out the most hidden ones and slay them for good. If anything, a concern for the overall listening experience might be that the audience isn’t really given much opportunity to come up for air under all the emotional weight this effort unloads. There are no breezy moments on this record. It’s a rapid succession of body blows that “enjoyable” just doesn’t seem like the right word for. “Cathartic” is more apt. 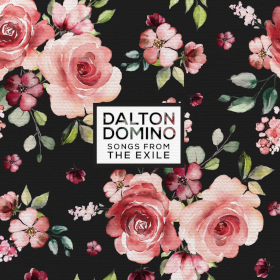 In the same vein of many West Texas songwriters, the sound of Dalton Domino and Songs From The Exile is just as much rock as it is country, just like it was with his first two records. But paralleling the maturity in songwriting and approach is also a more refined stylistic approach to the music, even though Songs From The Exile was recorded mostly live. Don’t expect to hear a lot of country instrumentation here, though some steel guitar appears in places like “Dead Roses,” which marks one of the standouts in the set, and is a song you can definitely hear crowds singing along with live. “Shadowlands” is another sumptuous listen with steel accompaniment, even if the sweetness is mixed with a deeper fear and sadness. But these songs and a couple others also feature fleeting moments of sort of a stylized rhythm that whether procured digitally or otherwise, sure sounds like it is.

The familial references embedded in songs like “Hush Puppy,” “Daddy’s Mud,” and “Half Blood” might be the hardest to listen through, and the most rewarding. Songs From The Exile is like a session on the psychiatric couch, stimulating the exhalation of baggage we all hold onto, and is better left behind through the words of honest recollection, and the willingness to take some personal responsibility. Sometimes the cadence of the words don’t fit perfectly right in these songs, or the end of a sentence doesn’t result in rhyme. But the depth of story is always present. The story is just too true to fit within the standard confines of music. Looking for that one song from the album that like the title track of his last one “Corners” could go on to define this record and Dalton’s career, the final song “Welcome Home” might be the most formidable candidate.

Songs From The Exile is going to be a little too fey and emotionally roiling for some, but subsequent listens do reveal smart and infectious melody development, and sensible tunes. And despite the approach being more artistic than accessible, the songs and stories of the record begin to stick to your bones until that craving that you feel with all good music appears.

We turn to music for so many different things, from distraction, to motivation, to the stimulation of memory and nostalgia. Songs From The Exile is the title you select from the shelf when you have things to get off your chest. Because even the strongest among us find ourselves mired in emotional eddies where our inclination is to blame the world or anyone but ourselves. But it’s often our unwillingness to be honest about what is bothering us that burdens us the most.

Purchase Songs From The Exile