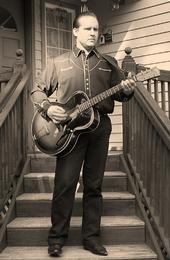 The term of endearment I have for James Hunnicutt is “The Glue That Binds.” At this year’s Muddy Roots Festival, no other musician contributed more, from playing drums behind the legendary Don Maddox, to playing lead guitar with JB Beverly & The Wayward Drifters, Jayke Orvis, Owen Mays, and Rachel Brooke. James Hunnicutt is the ultimate selfless musician, who makes so many projects and tours that wouldn’t happen without him come to life, and makes projects already happening that much better.

But Hunnicutt’s most memorable contribution at Muddy Roots was his solo set, just him and a guitar, standing in a pool of water with folks huddled around him under a tent as the rain poured down, giving an intimate performance with no amplification. This ultimate test for any performer, when you strip everything back and solely rely on song craft and the art of performance, is what is captured brilliantly in the album 99 Lives. Think of Billy Bragg without the political baggage. Considering the amount of friends and favors James could call in, he’d have a fully instrumented album cut and pressed in no time, but instead he chose this methodology as a means to convey his dark, open, and lonesome sound, and make it more about the message.

99 Lives is one of those projects I have to give the disclaimer “Not for everyone” to. It’s no coincidence this review is being posted on Halloween. The album is dark to say the least, but not from the usual suspects of dark elements in music, like screaming drug references or double bass hits. Think more Edgar Allan Poe than Hank3, or The Misfits more than Metallica. The darkness comes from Hunnicutt’s mastery of chord progressions and the minor key, and his ability to match those chords up with the themes of his songs seamlessly.

And though I say 99 Lives may not be for everyone, certainly there’s songs from the album that are. The title track made it on my Top Songs of 2011 So Far list in June, and will likely be among the top candidates for Song of the Year. “My Pain” in the middle of the album takes a breather from the dark shades a bit, and this understated approach may make it a good staring point for people first getting into Hunnicutt’s music. 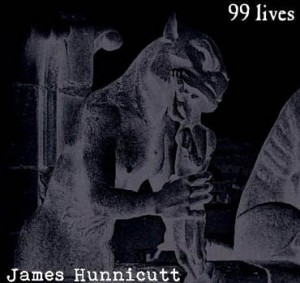 99 Lives calls upon the Gothic elements of country, like Johnny Cash and The Carter Family before: the cautionary tales, the struggles between the soul and temptation. These themes run like a backbone through the album, giving it a classic feel, grounded in the very early roots of Gothic Americana culture. James delves into the depths of human frailty with clarity and honesty: how guilt pummels the mind, and Will is compromised by the whims of the heart and the spell of addiction.

James speaks in the second song “The Misery That’s In Me,” “I sold my soul, so that the pleasure of flesh might ease my pain.” and then resolves in the final song “Never Meant” about his real-life sobriety, “This much has become evident, that past is rarely Heaven sent. So I’m letting it go to hold the promise of today.” In 99 Lives, Hunnicutt creates a circle of wisdom through fearlessly conveying his personal, intimate experiences in life, and by intimating his fears and frailties, and his victories against them. Honesty is the benchmark of all great albums, and 99 Lives’s honesty is unchecked.

And those words and honesty are complimented by the most powerful voice in all of independent country roots. There may be more colorful, more unique singers like Dale Watson, Rachel Brooke, or Lucky Tubb, but when it comes to sheer power and control, Hunnicutt has no peer.

And all the stuff I’ve mentioned about this album, and I still haven’t mentioned two of the most important elements of James Hunnicutt himself. The first is that he is a ringer of a lead guitar player, one of the few up to the task of standing to the right of Wayne “The Train” Hancock and in the shadow of Eddie Biebel and hold his own. However, Hunnicutt’s lead guitar skill set is displayed very little on this album, favoring more of a melodic, chord-based approach that compliments the music and mood better, and this might be the wisest element of the album: to resist the temptation to add overdubs that could have only taken away from the mood, and blurred the focus on James’ excellent lyrics and message.

And the last important element to James Hunnicutt, if not the most important element is who James is as a person. As we always say around here at Saving Country Music, it’s about people first, and then music, and you will be hard pressed to find a better person in music than James Hunnicutt. I touched on his selflessness before, but this is just the beginning. Unfortunately in 99 Lives, you will not hear about what a wise, patient, and inspiring person James is to be around, but anyone who has ever been around him can’t help but be candid about it at the first mention of his name.

Again, probably not for everyone, but for those who enjoy songs meant to be listened to and not heard, and a dark, sparse, and classic approach to music will find James Hunnicutt’s 99 Lives right in their wheelhouse.