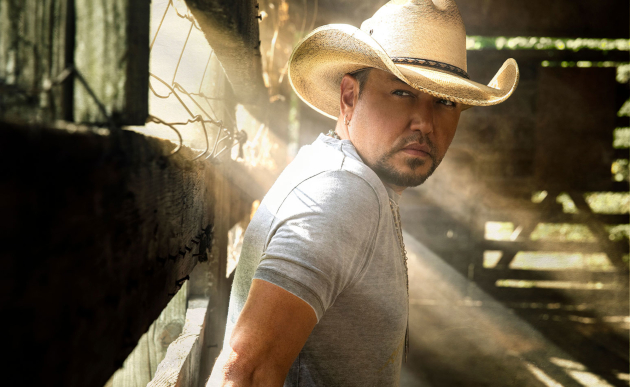 This is the most Jason Aldean record of Jason Aldean’s career, meaning he rooted out most all the substance, boiled down all the sentimental impurities, burrowed deep to the kernel of his id and ego, and doubled down on the most lucrative aspects of his career commercially. Usually when culling through even the worst mainstream country releases, there’s at least a couple of commendable songs buried in the album cuts, including, if not especially a Jason Aldean effort. I mean let’s face it, “Amarillo Sky” and “Fly Over States” were some pretty good stuff. But you can’t even give this new record credit for a couple of buried gems. ‘9’ is basically just the same song with sixteen different flavors, like snapping different skin covers on the same iPhone. It’s almost like what a parody artist would present if they were looking to make fun of a Jason Aldean record.

‘9’ is all about fire-breathing guitar riffs, pounding drums, and quick passes through lame brain verses on the way to big blustery choruses served up to shake the cross beams of Mountain Dew Arena or Doritos Stadium. We need sixteen of these damn songs like we need sixteen more Democratic nominees for President of the United States in 2020. You feel dumber just by feeding your curiosity and taking a peek into how bad this record is. And no, it’s not because of any individual song or songs. Sequestered individually, none of the tracks are especially terrible. It’s the collective effort. It’s the onslaught to your sense this record presents. At least most of today’s heavy metal carries with it some intelligence. Jason Aldean and ‘9’ are for listeners who turn music on to avoid thinking.

Jason Aldean has always been the preeminent purveyor of corporate country songs that work to affirm a lifestyle that country radio looks to target, telling you what to drink, what truck to buy, and what clothes to wear if you want to fit in and bag the girl. But in ‘9,’ Jason Aldean removes all pretense and filler to just put it right out there for you unabated, like in the song “Camouflage Hat”: 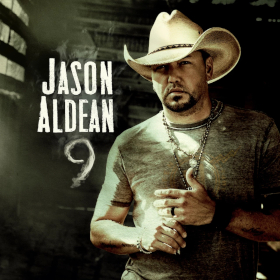 Muddy boots, muddy tires
Wrap your baby in your jacket by the fire
Yeah the girls ’round here they got it bad
For good ol’ boys in a camouflage hat

That’s right gentlemen, if you want to get laid, make sure to shop for your headgear in the hunting section. The women of a Jason Aldean song are not much more than chattel—something to “pretty up a pick up truck” as he asserts in “Camouflage Hat,” or the excuse to get hammered because they screwed you over, which really is nothing more than an excuse to inject a litany of name drops of alcohol products in songs to entice adult beverage companies to pull the trigger on country radio ad buys and arena tour sponsorships. Sure, it’s country music. But the amount of alcohol references in this record is still pretty incredible, as are the songs that drone on about mud on tires, mud on boots, dirt on roads, and how this is how you affirm your country cred.

Heading into 2020, Jason Aldean songs are nothing more than proxies for alcohol companies, auto dealerships, and outdoor sports outfitters. It’s just one affirmation of a catalog-style lifestyle brand after another. Oh but don’t worry if you’re not from the country proper, you can still participate in this lock step culture that discourages deviation. In the song “The Same Way,” Jason Aldean let’s it be known that no matter where you’re from, you too can become a corporate country tool.

If you got the same song coming out of your speakers
Got the same strong mix down in your cup
If you got smoke blowing in the air
Howling at the moon, if you do, then that’s what’s up…
Yeah, we might be from a different place
But we go down the same way…

Yes, everything’s the same. From the sixteen songs of this record, to any given sixteen songs you might hear on country radio, to sixteen songs you may hear on any radio station regardless of genre anywhere in America. All hail the monoculture, and the bleeding of regional and cultural diversity so corporate America can sell us all the same shit.

On ‘9,’ there’s none of those songs about the dichotomy of small town life—how all the down home hospitality and hay field parties give way to lost dreams and lack of opportunity in rural America, which is one of the themes Jason Aldean hung his hat on early in his career. About the deepest (and country) he gets is in the song “Came Here To Drink,” and even then the entire song is about how he’s not trying to drown demons or chase away sorrows. He just walked into a bar consume alcohol, and nothing more. It’s sort of a good encapsulation of this record. Don’t dare risk sharing something profound or sentimental, and shatter the facade of the vapid acceptance of life Jason Aldean presents in ‘9.’

There was little to no chance this album was going to be some sort of sea change or restructuring in what has made Jason Aldean a stable arena act for the last decade. He’s presented a slow and steady disappointment since his “Amarillo Sky” days. But somehow, ‘9’ is even more disappointing than you would even expect. There’s no real takeaway tracks, no hope for Aldean’s future efforts, no transitioning back to the type of quality and country-sounding songs from earlier in his career to keep up since the greater mainstream realm seems to be sliding more in that direction. It’s just Jason Aldean solidifying his position as country music’s shallow arena rocker. And it’s discouraging, even from Jason Aldean.

Oh, and by the way, the song “I Don’t Drink Anymore” rips off the idea of a Pete Schlegel song of the same name.