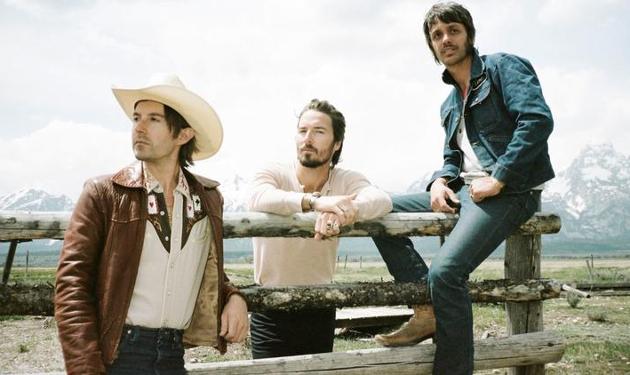 Midland will not be heading to Europe in a few days for scheduled tour dates in December as planned, due to a family emergency. In a missive sent out Friday morning (11-29), the band said,

“We regretfully must postpone our upcoming tour due to a medical emergency following the birth of Mark and Ty’s baby. His daughter is expected to make a full recovery, but Mark is unable to be away from home until that happens. We are all incredibly saddened to delay the tour and are working hard to reschedule for next year. Mark and Ty will share more info when they feel comfortable. Further information on the rescheduled dates and refund details if unable to attend will be released next week.”

Midland lead singer Mark Wystrach married Ty Haney on October 8th after becoming engaged in May. Ty Haney is the CEO of Texas-based clothing brand Outdoor Voices. Mark Wystrach formed Midland with guitarist Jess Carson and bass player Cameron Duddy in Dripping Springs, TX outside of Austin in 2016 after the three had previously met separately in Los Angeles, and set loose plans to form a band at the wedding of Cameron Duddy in 2013.

Receiving criticism for the embellishment of their back story as an authentic Austin, TX honky tonk band, Midland has nonetheless been a positive force for returning authentic country sounds to the mainstream with their 70’s and 80’s throwback and twangy style. Signed to Big Machine Records, their debut single “Drinkin’ Problem” became a Top 5 hit, was certified Double Platinum, and was also nominated for two Grammy Awards. The trio released their second record Let It Roll in August, which debuted at #1 in country. Their most recent single “Mr Lonely” peaked at radio last week at #21.

At the moment Midland plans to resume their tour in 2020, starting with their show at Royale in Boston, MA on January 31st.

UPDATE: On Friday (11/30), Ty Haney gave the update: “Sundance ‘Sunny’ Leon came into this world with a bang! It’s been a wild and unexpected week in the hospital, but we are all doing great and loving being together! So grateful for our amazing doctors and nurses who have taken the best care of us and to our friends and family for all the love, prayers and support! The power of love and positivity is real. Lil Baby Sunny girl is strong, beautiful and an absolute joy! We’ve gotten a clean bill of health and we’re going home tomorrow. Yeehaw! The adventure has begun!!!”