Amid all of the deconstruction of what country music once was permeating nearly every square foot of downtown Nashville and parts south and west where the Music Row campus looms, there sits an establishment called Robert’s Western World on lower Broadway amid a row of old brick structures, where by decree of the owner Jesse Lee Jones, only country music from the 80’s an earlier can be performed on the venue’s stage as a symbolic and steadfast firewall to the rapid genre erosion and gentrification going on all around it.

As older buildings continue to be demolished, or reconstituted into corporate-branded tourist hives, Robert’s stands fast against a rising tide like a shelter for authentic country. It’s from this venue, and the principles that guide it that long-time preservationist, revivalist, fiddle player, singer, and songwriter Joshua Hedley emerges with his first proper full length album, Mr. Jukebox.

Back in the day they called them “dues.” It was the effort an artist was expected to expend before they could enjoy opportunities of their own. Willie Nelson did it playing in the bands of Bob Wills and Ray Price. Waylon Jennings did it behind Buddy Holly, and years in residency at JD’s in Arizona. All the oldtimers spent long tours in tutelage until all the country standards came to them as easy as taking a breath, and an undying loyalty to the music coursed through their veins.

Joshua Hedley has been paying dues for many years, spending hours on the stage of Robert’s and other places, operating as a side player for others, showing a selfless dedication to the music beyond using it as a vehicle to spread his own name recognition, until country music has become ingrained in his DNA. Now after years of struggle and service, Third Man Records has selected him out of the ranks of hungry Nashville musicians to hopefully be the next to carry on the genre’s traditions under his own name. 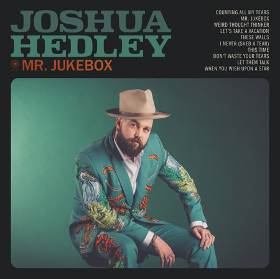 There are no close approximations on Mr. Jukebox. This isn’t about taking in the classic Countrypolitan sound as an influence, and then reinterpreting it for the modern context, or blending it with something else in a fusion of creative expression. This isn’t an instance where the music is classic, but the words are contemporary, or vice versa.

What Joshua Hedley has done on Mr. Jukebox is compose a haunting reenactment of country music from the 50’s, from the writing, to the phrasing, to the instrumentation and approach, marked by incredible detail, inferred by studious comprehension and tireless devotion to the effort, until there is no difference between what has been done here, and what you might have heard Chet Atkins and Owen Bradley preside over in Nashville’s historic Studio ‘B’ during the Eisenhower Administration.

It’s not just the presence of strings and choruses that marked the most recognized and perceptible style of the Countrypolitan era, or the chord progressions or even the words, which all stay true to the time period flawlessly. It even comes down to dialing in the guitar tones, and how inflections in the singing are delivered. A historian could pour over these recordings the same way a fine art dealer closely inspects for a forgery, and find little if any sign that tips off a slight of hand.

Still, the music is welcomed to the modern ear, because just like the recordings of the 50’s, the sentiments are timeless. Technology and style may have moved on, but the way the human heart breaks is eternal, the way it pines is timeless, and so too are these songs. Of course someone smartly attune to the latest technologies and innovations who perhaps enjoys the exquisite precision of a drum machine beat would laugh out loud at all this effort toward an outmoded style. But that doesn’t make the feat Joshua Hedley has pulled off here any less of a marvel.

It’s fair to point out that such dedication to a style of the past results in more of an interpretative work as opposed to an original one. It’s smart to worry about the scope of the audience for such a thing, or if presented with subsequent projects with the same approach, to wonder if the attentiveness of the audience will still be as strong since you’ve seen the trick performed before. Though not a specific criticism of this effort, where Joshua Hedley will go from here as a career track is a fair concern to levy.

Nonetheless, in the here and now Mr. Jukebox is incredibly welcome to hungry ears, from the oldtimes who remember the old sounds from their earliest memories, all the way to young hipsters who’ve found a love for the older music in their hearts. How we got here is imperative to understanding where we’re going, and Joshua Hedley has crafted music breathtakingly perfect in framing a time and place, and in so doing, proves its timeless place in the hearts of listeners.