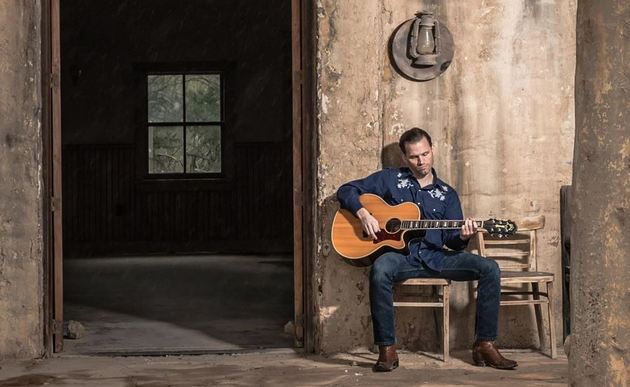 In music, there’s these little cracks and crevices where certain artists or albums tend to fall and get lost, or hide from ears that would be eager to hear them if they only knew they were there. As music continuously becomes more cluttered from the endless choices and the advent of being able to stream virtually every song ever recorded at any moment, this problem becomes even more compounded. Some of what you find in those forgotten crevices are like the refuse in between couch cushions—old popcorn kernels and bubblegum wrappers. And other times you unearth a gem.

Some artists like the Outlaw-leaning Jackson Taylor seem to fit into numerous scenes, but ultimately tend to get overlooked by all of them, almost to a comical level. Neo-traditionalist throwback Michael Monroe Goodman fits in a similar classification. The Kentucky native gives up nothing to his fellow artists doing their part to preserve the roots of classic country music. His 2013 record Unbreakable Heart was an excellent effort, but Saving Country Music had a devil of a time getting anyone to pay attention.

Perhaps it’s because Goodman isn’t out there for 280 dates a year hitting the honky tonks, but that doesn’t mean he isn’t spending plenty of time on stage reviving the spirit of country music. Along with being a musician and songwriter, Michael Monroe Goodman is a stage actor. Previously starring as Johnny Cash in the famous Million Dollar Quartet production, he now reprises the Man in Black in Chicago’s award-winning Ring of Fire musical, which finds Goodman leading the cast.

Michael’s last effort was a mix of traditional country and rockabilly, just like the early career of Johnny. But this new effort, The Flag, The Bible, and Bill Monroe centers around a country legend that hits a little closer to home. Michael’s middle name of “Monroe” is no coincidence. His parents were friends of the Father of Bluegrass, and they received Bill’s personal blessing to give Michael his middle name. Goodman spent many weekend nights backstage at the Opry while growing up—even if he was too young to know what a privilege it was to be in the presence of such greats at the time. 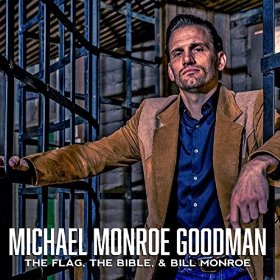 But The Flag, The Bible, and Bill Monroe isn’t a bluegrass album either, it is a Michael Monroe Goodman album. Like all albums that distinguish themselves from the herd, Goodman draws from his own narrative for the inspiration, story lines, and the sound in what turns out to be a deep and compelling work, while still overall resulting in one hell of a good time.

On his previous record, one possible flaw was it was hard to tell where Goodman the actor ended, and Goodman the musician began. That’s why there’s always an element of suspicion when an actor turns to music. Is it just an extension of a persona? Is the musician just acting, or is this their true self? With The Flag, The Bible, and Bill Monroe, Goodman leaves absolutely no room for questioning his intentions.

In moments he’s brutally honest about his history. “Drunk Again” is about his father, and finds Goodman ferreting out personal family flaws for use as inspiration. It’s only topped in emotional draw by the brutally candid, yet beautifully touching “She Was Mine” about his mother. By being so courageous and frank about her failings, he does greater honor to his mother than all the meaningless platitudes ever uttered by sons do cumulatively since the beginning of time.

Just like Daniel Romano and some other neo-traditionalists, Michael Monroe Goodman is gifted with that classic sense of perspective that allows him to see the world through the eyes of the 60’s era, and then use that to interpret modern, and eternally-relevant themes. “I’m Just Country” is a damn anthem, and “Concerts in My Underwear” is a song that would have become a standard if it had been released in the Countrypolitan era. However when Goodman sings a song like “The Flag, The Bible, and Bill Monroe,” you don’t have to second guess if you’re hearing the irony of a hipster. This is straight from his heart.

And the music and production are excellent. With harmonious lead guitar lines, the super tasty steel guitar, some really well-placed female harmonies in a couple of spots, Goodman really went all out on this one and really up’d his game as someone folks show be paying much closer attention to in the classic country realm. It also helps that he’s such an astute guitar player himself.

From the heart, from the home, and from old Kentucky, The Flag, The Bible, and Bill Monroe marks one of the standout classic country efforts in the entirety of 2015.

Purchase The Flag, The Bible, and Bill Monroe